The Vikings aren't exactly coming into Green Bay on a hot streak. But if this season has taught us anything, it's that momentum means absolutely nothing with the Vikings.

Let's start the weekly preview off with a question: what if real life was like the 2012 Minnesota Vikings season? It would probably go something like this:

You're thinking about selling your house, so you get it appraised. To your surprise, the appraisal price is about $40,000 higher than you expected. So you put the house on the market. Three days later there's a hail storm that blows through town and absolutely destroys your roof. Luckily, your insurance covers the entire cost of your new roof, which in turn raises the price on your house even more! A few weeks later, you have a seller lined up that's willing to buy for the asking price and cover the closing costs on top of it. Just before the final paperwork is signed, a winter storm hits and destroys your siding. The buyer backs out, insurance will only cover part of the damage, and you're stuck with your original house until you get everything fixed. But hey, at least you have a new roof, right?

You plan an elegant evening and take your wife out to a five-star steakhouse for your anniversary. The two of you carefully look over the menu and make your orders. When the dishes are served, you realize they screwed up your orders. But you're starved and you've heard that everything on the menu is great anyway. So you stick with what you were given. Lo and behold, the food is amazing! It's even better than what you actually ordered could have ever been. However, your enjoyment of the meal is tempered a couple hours later when both of you get food poisoning. The restaurant gives you a $500 gift card for your bad experience...but then closes down before you can use it. But hey, at least you got a nice meal and actually lost a couple pounds from the subsequent trips to the bathroom, right?

You're dating a very attractive yet slightly crazy woman. You...OK, you probably know how that one goes. I'll spare you the details.

Hopefully you get the point by now: the Vikings have been really up and down all year. After a razor thin win over the Jaguars and disappointing loss to the Colts to open the season, they shocked the 49ers to start an impressive three-game winning streak. Just when it looked like momentum was carrying the Vikings to unexpected heights, they went to Washington and got RGIII'd. After the defense dominated in a win over the Cardinals, they allowed 66 points in back-to-back ugly losses. The season looked to be lost. But then the Vikings pulled out an impressive win over Detroit to get some momentum heading into their bye week.

And we all know where that momentum got us last week, especially against a team that was supposedly reeling from two ugly losses in a row.

We always hear about which NFL teams and players are "hot" or "on a roll". Momentum has to be a real thing, right? Don't we always say "here comes AP!" when Adrian Peterson rattles off a few impressive carries? Didn't the Giants ride their momentum to a Super Bowl victory last year?

Sure, but how do you explain Green Bay's last game? The Packers were on a five-game winning streak while the Giants couldn't have looked worse in losses to Cincinnati and Pittsburgh. Naturally, New York won by four touchdowns.

Grantland's Bill Barnwell covered the topic of momentum on Monday. Barnwell is one of those football writers that actually does a ton of research to back up his claims, just like Arif does for us here at Daily Norseman. (Instead of just making weak analogies and fart jokes like I do.) Here's what Barnwell had to say about momentum:

Momentum's always been a tricky concept for me to understand in football. I don't doubt that some semblance of momentum exists somewhere, but the amount of effort and posthaste thinking that goes into defining momentum swings and momentum-changing plays has seemed, well, sloppy. It's more like an effort to slap a narrative on independent events happening within the context of a game than a way of actually capturing meaningful shifts in the emotional state of one.

Basically he's saying that momentum is an easy way for us to explain what we're seeing or predict what might happen in the near future. However, anyone that watches the NFL with any regularity knows that "momentum" is one play or one game away from disappearing.

So what does all this momentum talk have to do with Sunday's game at Lambeau? Long story short, it's that we shouldn't expect the Vikings or Packers to play like crap just because both teams did last week. Maybe the Vikings rebound when everyone least expects it again. Or maybe the Packers deliver an ass kicking like the one they doled out in Houston to start their winning streak. Or, who knows, maybe both teams play poorly again and the game resembles a Chiefs intra-squad scrimmage.

What I do know is that Green Bay has the better team right now. Sure, the Pack's offensive line looked like they had blocking suggestions instead of blocking assignments last week. They still don't have a running game. And I guess they still have quite a few key players injured. But what they do have is a quarterback who will consistently beat you with his arm (and creep you out with his mustache). They have Greg Jennings returning from injury (and about 45 Old Spice commercials). They have a coaching staff that usually doesn't hesitate to make adjustments.

Adjustments. A term that may or may not be in the vocabulary of the Vikings coaching staff. Case in point: the Bears knew their offensive line needed help last week. They adjusted and max protected on a lot of passing downs with only a few players running routes. With a stud wide receiver like Brandon Marshall and accurate passer like Jay Cutler, Chicago had success moving the ball while avoiding major pressure on most plays. Did the Vikings dial up big blitzes to catch the Bears off guard? I sure didn't see many. Alan Williams seemed to be content with rushing four and waiting for Cutler and Marshall to find holes in the coverage.

Call me crazy, but I bet the Packers saw the game tape from last week. They know their offensive line ain't exactly the mid-90's Cowboys either. I'm guessing that they might have a few more blockers stay at home and depend on Aaron Rodgers to find one of his many talented receivers. If the Vikings come into Green Bay with the same game plan that they had last week, we can expect the same results.

I personally don't expect the Vikings to play nearly as bad as they did last week; that said, I don't expect a different result overall. The Vikings are visiting another tough division opponent that is plenty motivated because they just got embarrassed on national television. They still might not have Percy Harvin. And while they've made noticeable strides in 2012, I think the Vikings still aren't ready for the postseason.

Leslie Frazier has never beaten the Packers or Bears as a head coach. I don't think that will change on Sunday. But if he does, it would certainly be...momentous, wouldn't it?

One part of the NFL where momentum still applies: my weekly picks! I'm on fire this year! (Oh crap, I'm going to prove how momentum doesn't exist here either by going 6-10 this week, aren't I? Anyway, home teams are in ALL CAPS):

Saints over FALCONS: Atlanta could flush the New Orleans turd clear out of the playoff picture with a win. So why do I get the feeling that the Falcons aren't going to wipe properly and leave flecks of the Saints clinging on for another week?

BILLS over Jaguars: The following game is rated F for "Fantasy Purposes Only". All audiences that aren't starting C.J. Spiller or Cecil Shorts III are not permitted to view any part of this game.

BEARS over Seahawks: Seattle on the road is like Aquaman on land: useless.

LIONS over Colts: Just to drive my "momentum is a myth" theory home. And because I don't get how so many people are already handing Indianapolis a Wild Card spot with five games left.

Texans over TITANS: Maybe Houston can win this one without overtime or anything!

Panthers over CHIEFS: My survivor pool pick of the week, now 10-2 after Denver beat Kansas City last week. And yes, I realize that I'm picking a 3-8 team to win on the road. But like I said, I'm 10-2, not 12-0--it's not like I'm actually still in any pools. Plus it's pretty easy to pick against a team that hasn't scored multiple touchdowns in SEVEN GAMES.

49ers over RAMS: Drink every time the word "tie" is mentioned during this game and see how far you get before blacking out. You just know that the Niners will be up by a score early and the smart ass announcer will make the lame joke, "Uh oh, if Bradford leads St. Louis to a touchdown here, we'll be TIED! And we all know what happened LAST TIME! [Fake announcer chuckle]"

Patriots over DOLPHINS: I don't have much to add, and I don't think we've included a Dolphins cheerleader in the Gratuitous Picture of the Week this season. Let's remedy that. 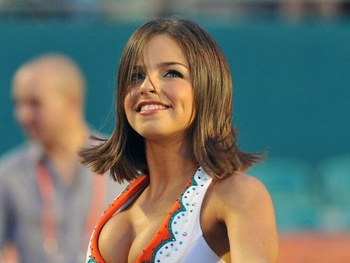 JETS over Cardinals: "Let's win this one for Fireman Ed!" said no Jets player or fan, ever. Do you think that Jets fans will actually be disappointed if they win this one? It will hurt their draft choice and it will prove that they don't even have the worst QB situation in the league.

BRONCOS over Buccaneers: I know that I just spent over 1,500 words talking about how momentum doesn't exist, but I'm not picking against Denver until they actually lose again. They're playing too well on both sides of the ball.

Browns over RAIDERS: The following game is rated F for "F*** NO". All audiences of any kind are not permitted to view any part of this game. If the Red Zone Channel should turn to this game for some ungodly reason, you are required by federal law to change the channel until a suitable game has returned to the screen.

Bengals over CHARGERS: It's amazing that both coaches in this game are still with their respective teams. It's certain that only one will be after this season.

RAVENS over Steelers: Wait, this isn't on national television? I thought every Baltimore/Pittsburgh game was required to be in prime time. How else will announcers gush about how hard-hitting the rivalry is and claim how there's "no love lost"? Huh. It must have been downgraded since Ben Roethlisberger's status is still in serious jeopardy.

COWBOYS over Eagles: Oh yeah, that's why Baltimore and Pittsburgh aren't on national TV. Because the entire NFC East occupies the two big games this week. I can't wait for Al Michaels and Cris Collinsworth to discuss the futures of Andy Reid and Jason Garrett for three hours while crappy football happens to be going on in the background.

Giants over REDSKINS: Hey look, a prime time NFC East match up that people will actually give a crap about! Good thing Dexter, Boardwalk Empire, and Homeland will keep me occupied during Philly/Dallas.