The Vikings have looked awful their last two games. Can they head into the bye week with a much-needed win over Detroit or will they keep free fallin' out of the playoff picture?

The Vikings head into their last game before the bye on an ugly two-game slide. How ugly has it been? So ugly that I don't even know how to properly list all of their problems with simple words. I'm not sure I can illustrate the vitriol that most fans feel for certain members of the Vikings and their coaching staff in just a few paragraphs.

So I'll describe it with a song instead! Without further ado, I present an awful parody of a classic song that will hopefully explain how we're all feeling heading into Sunday's game against the Detroit Lions.

All the running backs, walkin' through our defense
Score touch-downs, like it's End Zone Boulevard
And all the bad throws, are usually from Ponder
And all the good fans, go home with broken hearts

I wanna first down, but we have Musgrave
I wanna write a sign, that says "Fire This Guy"
Gonna free fall, out of the playoffs
I wanna leave this, and watch Red Zone for a while

That pretty much sums it up, right? We know that the Vikes have some excellent players, but lately they've been the same old freaking Vikings.

With all apologies to the Detroit Lions, I won't be discussing our upcoming opponents much in this week's preview. We've already seen our division rivals once this year so we know what we're up against. Matthew Stafford to Calvin Johnson deep and Brandon Pettigrew over the middle. Mikel Leshoure and Joique Bell out of the backfield. A defense that's improving but one that you can still certainly score on. An ageless kicker that barely ever misses indoors. A team that struggled out of the gate but is currently playing their best football of the season.

So we're all aware of what we're facing: a solid yet beatable team with lots of talent at certain positions and weakness at others. Sounds like a certain purple-clad team that we all cheer for, right? So why are the Vikings free fallin' while the Lions are hitting their stride?

Let's get straight to the two big scapegoats first: quarterback Christian Ponder and offensive coordinator Bill Musgrave. We've covered these two ad nauseam on our site the past few days so I'll just stick to the high-level analysis: they're both definitely at fault for the Vikings' recent decline. Ponder is finishing games with passing yardage that some quarterbacks rack up on a single drive. He's missing open receivers and making poor decisions. But then again, he hasn't had much to work with in Musgrave's offense. The unimaginative and redundant play calling mixed with the severe lack of adjustments throughout the game is killing the offense just as much as Ponder's inconsistency.

And before we go down this road again: no, I don't think Joe Webb is the answer. The guy simply hasn't shown he can make the throws necessary to be a starting quarterback in the NFL up to this point. However, if Ponder keeps playing like he has, Webb can probably get more rushing yards than Ponder is passing for. It's not Webb time just yet, but it might be worth considering after the bye week if the offense can't pick it up on Sunday.

The wide receivers outside of Percy Harvin aren't doing the offense any favors either. Jerome Simpson hasn't been himself since he was injured early in the season; Simpson himself has admitted as much. With the team's only deep threat neutralized, teams are blanketing Harvin and taking Kyle Rudolph out of the game altogether. To make matters worse, Harvin might miss the game with an ankle injury. How the heck will the Vikings move the ball outside of Adrian Peterson's one man show? If there ever was a time for the Vikings to finally give Jarius Wright a chance, this has to be it. (No, I don't expect much out of Wright if he does play on Sunday, but at this point it can't get any worse.)

Pinning all the blame on Ponder and Musgrave is a huge injustice to the other glaring weaknesses that have surfaced lately. The defense has allowed 801 yards over the past two games. They even allowed 356 in their win over the Cardinals, a team that has lost five straight mostly due to their brutal offense. We can all point to how Chris Cook's injury has really hurt the team--which it has--but the most glaring difference I have noticed has been the tackling. At the beginning of the year, I marveled at how technically sound the defense looked. As soon as Minnesota defenders got to ball carriers, they were down. Now potential tacklers are flying off of opposing players like they have land mines in their thigh pads.

My theory is that the lack of depth the Vikings have on defense, especially along their back seven, is catching up to them. The aforementioned anemic offense can't hold the ball for very long so the thin defense is on the field for an uncomfortable amount of time. It's a proven fact that tired tacklers are poor tacklers, and I believe it's coming to fruition in a big way for the Vikings.

But maybe we're just over-analyzing everything here. Perhaps the Vikings just really suck against high profile rookies. Look at the four losses Minnesota has suffered so far--Indianapolis, Washington, Tampa Bay, and Seattle. That's Andrew Luck, Robert Griffin III, Doug Martin, and Russell Wilson respectively. Each one had a huge game in wins over the Vikings. The Lions don't have any big-time offensive rookies, so we should be safe...right?

Unfortunately, I think the rookie thing is just a coincidence. The Vikings are simply getting exposed. Leslie Frazier is promising change in the game plan on Sunday; at least we know he's aware that his team has been getting out-coached lately. At this point I'll only believe there's change when I see it. The Lions are on a roll and they realize that they can't afford to go 0-3 in the division. Unless we see major changes in philosophy and execution, the free fall will continue.

And now for the rest of my Week 10 NFL picks (home teams in ALL CAPS):

JAGUARS over Colts: Yes, this upset pick is probably as dumb as thinking the plot of Taken 2 would be wildly different from the first movie. But home teams are 6-2 on Thursday night, the Jags already beat the Colts this year, and this game has letdown written all over it for Indianapolis.

Giants over BENGALS: To all fellow fantasy football Eli Manning owners: how badly did you lose the last two weeks? Hopefully it wasn't as bad as I lost. I benched Eli in favor of Luck this week, so I'm sure he'll explode for 350 yards and 4 TDs in an easy win over Cincy.

DOLPHINS over Titans: The scrappy Dolphins haven't been upgraded to "must-watch" status in Miami yet, but at least they're a notch above "something to do between Heat games and Dexter episodes" status now.

PATRIOTS over Bills: How many points would the Pats have to score in this game to genuinely surprise you? Sixty? Seventy? More?

Falcons over SAINTS: Aww, how cute, New Orleans thinks they still have a chance at salvaging their season. Even if I get this pick wrong, they still have a brutal vs. San Francisco / at Giants / at Atlanta stretch after Thanksgiving. Neaux chance.

BUCCANEERS over Chargers: It is Norv-ember, the month where the Chargers usually sucker us into thinking they're actually good. And the Bucs defense is still suspect. But Doug Martin has been running like the video of that little girl dominating youth football that went viral this week.

Broncos over PANTHERS: You know how all the talking heads are saying how easy Denver's schedule gets down the stretch? This is what they're talking about. Since I have nothing else to add, how about a Gratuitous Picture of the Week? 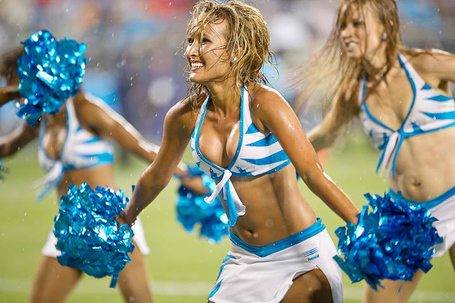 "Peyton Manning will beat us with throws, so just stare at our lack of clothes!" (image via www.ridethepine.com)

RAVENS over Raiders: Thank you, Oakland, for making us feel a little better about our defense in Minnesota. We made Doug Martin look awesome, but at least we didn't give up one of five best fantasy games of all time.

SEAHAWKS over Jets: Seattle's at home. The Jets are...well, the Jets. Sometimes it's just that simple.

Cowboys over EAGLES: This one could go either way, but I will guarantee that the loser of this game gets talked about 100 times more than the winner.

49ERS over Rams: How many points would the Rams have to score to genuinely surprise you? Thirteen? Ten? Less?

Texans over BEARS: I really think that Chicago is a little overratnapiojejfpoajkl;. Their defense is great but they can't expect to force that many turnovers every weekjlksjre;lkj;lk. Outside of Brandon Marshall and Matt Forte, their offense is pretty terriblelelejlkrja;lkjeoij. (Sorry, every time I try to write something negative about the Bears, Charles Tillman punches my keyboard out of my hands.)

STEELERS over Chiefs: My suicide pool pick of the week, now 7-2 on the season after Houston beat Buffalo last week. Wait, what? It's your suicide pool pick too? No kidding! It's like the Chiefs are an automatic W at this point or something!