Who would have thought that Sunday's game between the Vikings and Rams has playoff implications...for both teams?

We now interrupt our coverage of the Christian Ponder Debates to bring you this brief message. We will return you to your regularly scheduled yelling at each other about our quarterback shortly.

Wow, what a crazy couple of weeks it has been here at Daily Norseman. The heated debate about the Minnesota Vikings' starting quarterback has garnered more passionate discussions than a gay married doctor that performs assisted suicide on cloned stem cells while he wears a fur coat made from lab-tested animals and talks about gun control. All of the contention and agitation about Ponder, the wide receivers, offensive coordinator Bill Musgrave, and the Vikings front office has been both enlightening and exhausting.

(Here's a fun theoretical situation: let's say you took 100 of the most diehard Minnesota sports fans around and locked them in a room overnight with unlimited booze. You offer a $1,000 prize to whoever makes the most convincing case about the two following topics: whether or not to trade Joe Mauer and whether or not Christian Ponder should be the starter. How many fistfights are there by the end of the night? Twenty? Fifty? Seventy? More?)

So let's take a break from all the back-and-forth about our favorite team and give ourselves a moment to appreciate how important this week's game actually is. When the 2012 NFL schedule came out, exactly zero people looked at the Week 15 Minnesota at St. Louis game and said "now there's a game that could decide an NFC Wild Card spot!" The Vikings and Rams combined for a 5-27 record in 2012. Less than a year later, neither team has a losing record and the winner of Sunday's game will have a solid shot at making the playoffs with two games to play.

We're aware of how the Vikings got to this point. The basics: they had a good draft, they're playing better on special teams and defense, and they have an elite quarterback a rebuilt and rebooted version of the best running back in the world, Adrian Peterson.

But how about the Rams? How the heck are they 6-6-1? They treated their draft like they were building for 2013 and beyond. Remember, they traded the opportunity to get Robert Griffin III in order to stockpile a ton of first round picks in future seasons. This was a team that needed a lot of pieces to compete...yet here they are competing already.

Their reasons for the quick turnaround start at the top. Jeff Fisher is one of the most universally respected head coaches in the league with good reason--he's pretty darn good at his job. Nobody will argue that St. Louis is the most talented team in the NFL, but Fisher is great at getting the most out of his players.

A big part of why Fisher took the Rams job is because he would get a say in their personnel moves. So far, he and the rest of the Rams front office have made some great decisions, starting with their draft picks. Even though St. Louis traded down multiple times in the draft, they were still able to get a handful of players that are already big contributors as rookies. Michael Brockers is an integral part of their improved pass rush and has four sacks this season. Janoris Jenkins has started every game and already has three defensive touchdowns. Fourth-round wide receiver Chris Givens has made some big contributions, especially when Danny Amendola has missed time this year. (Think the Rams would notice if we stole Givens after the game? Lord knows we could use a guy like him right about now.) They drafted the second best kicker in the draft, Greg Zuerlein. (Yeah, I'm biased. But Blair Walsh is having a better year.) Even their last pick of the seventh round is making an impact--Daryl Richardson has been a great change of pace back to help keep veteran RB Steven Jackson fresh. It's easy to see that both the Vikings and Rams have made their teams better the old fashioned way--through the draft.

Sometimes all it takes to turn your season around is a little bit of good fortune. The Rams have been ruthlessly unlucky with injuries over the past few seasons. They've still had plenty of bumps and bruises this year, but this season has been much more manageable. Turf Show Times has pointed out how the lack of major injuries combined with the development of depth has been a quiet reason for the Rams' surprising season. The Vikes have been pretty fortunate on that front as well. Outside of the big Percy Harvin and Chris Cook injuries, Minnesota has been relatively healthy all year.

Of course to be successful in the NFL, you have to take care of business in your division. The Vikings and Rams took care of absolutely nothing in 2011: they were 0-12 against their respective divisions. This year is a different story: the Vikes are a respectable 3-2 while the Rams are an eye-popping 4-0-1. Turnarounds have to start somewhere, and the backyard of your own division is always a good place to do that.

The divisional victories are great, but the winner of Sunday's game will still have a tough road ahead if they hope to make the playoffs. The Vikings are at Houston and home for Green Bay while the Rams finish up with road games in Tampa Bay and Seattle. With at least a team or two to pass in the Wild Card race. But at least their fans will get to keep their improbable dream alive for another week. I think the game will turn on three major factors:

See a theme there? I'm going to stop my recent theme of picking against my favorite team. I think the Vikings will pull out a rare road win on Sunday. Why? Because I think this team has finally accepted who they are. Leslie Frazier seems to have figured out his team's identity. There's a very delicate yet very simple recipe for victory.

Naturally, it all starts big heaping dose of Adrian Peterson. Then you sprinkle in a solid, opportunistic, bend-but-don't-break defense. Throw in sound special teams and a pinch of Christian Ponder competency*, and viola! An 8-6 record. (* = If you're out of this ingredient, just throw in a lot more AP. It can cover up a lack of competence, like it did last week.)

We now return you to your regularly scheduled programming of bitching at each other about Ponder, already in progress.

And now for the rest of my Week 15 NFL picks (home teams in ALL CAPS):

Bengals over EAGLES: It's like these two teams have changed places from their traditional roles: the Eagles are one of the worst teams in the league and the Bengals are pissing away a playoff spot.

Giants over FALCONS: Atlanta's insistence to keep rushing Michael Turner for 3 yards a pop is almost as baffling as the writers of Homeland deciding to throw all sense and plausibility out the window in the latest two episodes. (Sorry. As a white blogger in my 30's, I'm required to bitch about Homeland.)

Packers over BEARS: It's the second leg of the semiannual "I Wish They Could Both Lose" Bowl, but at this point a Green Bay victory would probably help us more. We'd be deadlocked with Chicago (provided we beat St. Louis) and the Packers would be one step closer to the Week 17 game not meaning anything for them.

Redskins over BROWNS: Time for the weekly "Is that sad fact about Cleveland actually true?" game! Today's fact: the Browns have a three-game winning streak for the first time since the 2005 season. [Answer: False. They had a four-game winning streak to end the 2009 season...with a 5-11 record. Only in Cleveland!]

DOLPHINS over Jaguars: My reluctant survivor pool pick of the week, now 11-3 on the year after Seattle edged Arizona by 58 last week. Can you tell I'm running out of competent teams to pick? Relying on the Dolphins is like moving into a new house in Minnesota during the winter. It might go surprisingly well but there's a really good chance that it's going to suck. (And yes, we're moving into our new house on Friday. Our current place has no elevator and there are 40 stairs to walk up regardless of which entrance you use. What could possibly go wrong?)

SAINTS over Buccaneers: I can't tell which team is more disappointed that their season effectively ended last week, so I'll go with my fantasy playoff rooting interests and hope for a huge game from Drew Brees.

TEXANS over Colts: I thought the letter jackets that Houston wore on Monday were awesome, even if they did spawn a million "they looked AND played like high schoolers" jokes. Since this game isn't on national TV, the Texans will be just fine and clinch their division. (So they have much less to play for next week against the Vikings, of course.)

Seahawks over BILLS: Be careful, Seattle! This game is in Toronto and the Bills are an actual professional football team, unlike the team you played last week.

Lions over CARDINALS: I'll take one of the most talented 4-9 teams I've ever seen to beat the worst 4-9 team of all time. Since I don't have anything to add, how about the Gratuitous Picture of the Week? 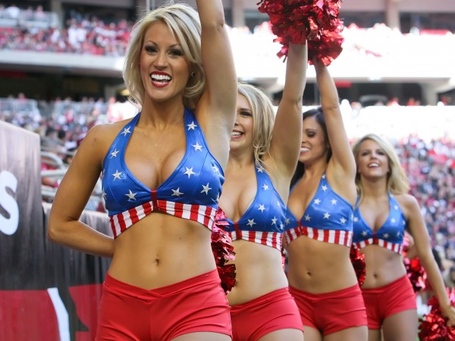 "Go Cards get that first and 10, ah screw it we won't win again!" (image via wallpapersget.com)

Panthers over CHARGERS: Their convincing wins over contending teams last week were like bringing a fresh keg to a party after everyone has passed out or gone home.

Steelers over COWBOYS: Sounds like Dez Bryant has a broken "out of bounds" hand. If he can't go or isn't 100%, I'll take Robo-Ben and his Kevlar vest to shoot down Dallas' playoff hopes.

RAIDERS over Chiefs: These two teams don't even deserve a joke about how repugnant this game is. NEXT!

PATRIOTS over 49ers: Oh good, it looks like we're headed for another Tom Brady/Peyton Manning matchup in the playoffs. Because that won't be over-hyped or anything.

Jets over TITANS: Note to all you husbands out there: let your wife watch The Voice finale or whatever crap reality shows she might watch this Monday. You won't be missing any football.