Christian Ponder is surprisingly married and the Vikings are surprisingly 8-6 and in the playoff hunt. Can they upset the Texans Sunday or will the honeymoon be over in Minnesota?

SCENE: This past Monday. A courthouse in Hudson, WI. Christian Ponder and Samantha Steele walk in hand in hand.]

Christian: Oh Sammy, I'm so glad we're sneaking away and getting married today! I feel so blessed to lock up some top-notch ESPN talent before my inevitable benching sometime next season.

Samantha: What was that?

Christian: Er, I mean, I feel so blessed that we're getting married during the inevitable holiday season. Yeah. That's what I meant.

Samantha: Oh Chrissy, you're so sweet. I've always pictured myself marrying a stud NFL quarterback. But I suppose you'll do.

Samantha: I mean, I suppose you'll do AWESOME as a husband. I know I've only known you for a few months, but I feel like we're kindred spirits. We're both living in the shadows of bigger stars. I'm still trying to convince people that I'm not Erin Andrews and you're just trying to pass for more yards than Adrian Peterson runs for every week.

Adrian: Did I just hear that somebody was going to get more yards than me? I thought we were crashing a wedding, not a comedy club!

Christian: Uhh, guys! Hey! What a surprise! We didn't even invite any friends or family...how the heck did you guys find us?

Jared: You think any quarterback can hide from me in Wisconsin?! I doubt it! Although the door to the courthouse did block much better than the Packers' offensive line...

Rick: Yeah Christian, I just came to support my quarterback of the future. My quarterback with a fully guaranteed $10.5 million contract, through the 2014 season, that I personally vouched for, and that my reputation as a General Manager basically depends upon. Oh God...hey, you got anything to drink around here?

Samantha: Um, no, sorry. Like Chrissy said, we weren't expecting any guests. How did you find us again?

Jared: Actually coach Musgrave said he'd know where to find you. First thing he's been right about all year besides handing Adrian the ball.

Bill: Yep, I got us here. The directions to the courthouse were just like my offense--completely predictable!

Adrian: Well coach, technically I guess you told us how to get here, but we all know that I was the one that got us here.

Christian: I was going to ask you about that. I don't see a car outside. Did you take a cab or something?

Adrian: Cab? Please. We did the same thing that we do on Sundays--the whole squad just hopped on my back and I took us where we needed to go.

Samantha: Oh nothing. But that's so cute that you guys brought this little guy to be our ring bearer! He's adorable! Chrissy, is he your nephew?

Blair: Hey, I'm on the team lady. I'm the new kicker. I'm actually a big part of our success this year.

Samantha: Aww, that's adorable! The wittle guy thinks he contributes to victories, just like my Chrissy!

[Adrian, Jared, and Kyle stare at the ground awkwardly and mutter a bunch of unclear excuses.]

Rick: Hey, I drafted Blair! See, I know how to pick 'em! I AM AN ELITE FOOTBALL MIND! You sure you don't have anything to drink?

Samantha: No, Rick! Can we just get this ceremony over with so I can get back to covering real quarterbacks?

Samantha: I meant real COLLEGE quarterbacks Chrissy Wissy! You know I love you for your loyalty. Every time we're together, you just stare at me and shut out the rest of the outside world just like I'm your primary receiver.

Christian: You know it babe. No matter how open other girls in the field might be, you're the only one I'll ever overthrow.

Kyle: [whispers to Samantha] I know that feeling.

[The wedding ceremony goes by quickly without incident. Christian and Samantha turn back to face their unexpected guests.]

Samantha: Well I suppose since you're all here I can toss the bouquet, right?

Jared: I'm outta here. My wife already made me cut off my hair. If I caught a bouquet at a wedding, I'd hate to think what else she'd make me cut off.

[Samantha tosses the bouquet over her head and it lands perfectly in Kyle's hands. He seems incredibly startled and stares down at his catch.]

Kyle: Whoa, what was that?! It hit me right between the numbers! I didn't have to leap or reach back across my body or anything!

Rick: [furiously dials up a number at the Vikings front office] Yeah hi, it's Rick. Somebody get me the rules on how spouses count against the salary cap. I think we just found our new quarterback of the future.

In all seriousness, congratulations to the newlyweds. They both seem like great people and I hope their marriage lasts hundreds of times longer than their engagement did. In my opinion, when and where our quarterback gets married is none of our business. But since I spent most of the week unpacking and assembling various pieces of furniture at our new house, I needed some comedic filler in lieu of actual research and analysis. So here's my brief preview.

I just don't see the Vikings pulling off the upset this week in Houston. They haven't beaten an opponent with a winning record on the road since the crazy Tuesday night game against Philadelphia nearly two years ago. And now they're facing a 12-2 Texans team that can wrap up home field advantage with a win. A 12-2 Texans team that still feels like it has a lot to prove before they're taken seriously in the AFC playoff picture. A 12-2 Texans team that has a pretty darn good running back of their own, Arian Foster. A 12-2 Texans team with Andre Johnson, exactly the type of big, physical wide receiver that the Vikings have struggled against all season; just look at the numbers Brandon Marshall and Calvin Johnson were able to put up against Minnesota this year.

That said, are the Texans vulnerable from time to time on defense? Sure. But they're easier to attack through the air, which obviously isn't the Vikings' strong suit. Could Adrian Peterson go bonkers and trample through nine-man boxes in his relentless pursuit of Eric Dickerson's single-season rushing record? Of course. But Wade Phillips has to be scheming a game plan that is solely dedicated to stopping #28, and he has the personnel to pull it off. (Contrary to popular belief, Houston has defensive players other than J.J. Watt that are capable of making big plays.) AP is going to get his no matter what, but I have a feeling that it might be a struggle for him to get to triple digits in yardage on Sunday.

Even if the Vikings lose this week, they still have a decent chance at making the playoffs by winning at Green Bay next week. (Chris covered all the possibilities earlier this week.) And if the Vikings end up splitting their last two games, I think we can all agree that celebrating a victory against the team from the same state that Christian Ponder celebrated his wedding would be much better in every way.

And now for the rest of my Week 16 NFL picks (home teams in ALL CAPS):

Falcons over LIONS: A game with slight real-life playoff implications but a bajillion fantasy playoff ramifications. I just hope Jon Gruden can bounce back from the emotional scarring of actually having to criticize players in last week's Monday night game. He could barely muster any THIS GUY's during that awful Tennessee-New York game.

COWBOYS over Saints: Don't worry, Dallas fans: your team can still crap out of the playoffs next week if they win against New Orleans.

PACKERS over Titans: Jeff Saturday got benched in favor of Evan Dietrich-Smith yet he still leads the fan Pro Bowl voting for NFC centers, proving once again that "I've heard of that guy" is the main criteria for most fans when choosing the best offensive linemen.

Colts over CHIEFS: Smart move by the Colts to possibly bring Chuck Pagano back this week. He can get the hang of everything again before the playoffs with zero threat of being outcoached. This is my survivor pool pick of the week, now 12-3 after Miami took out Jacksonville in the Sad State of Florida Football Bowl last week.

DOLPHINS over Bills: There are only two legitimate reasons to care about this game: either you have C.J. Spiller on your fantasy team or you are related to one of the players. You know what? Scratch that. Only the first reason is valid.

Chargers over JETS: I'm fairly certain a team has never turned it over five times and still had a +4 differential in the game. I feel like that could happen here.

Redskins over EAGLES: Philly fans are probably booing the Mayans right now. At least if the world ended they wouldn't have to watch their team finish this awful season.

STEELERS over Bengals: This feels like one of those Tuesday play-in games during March Madness. The winner gets the opportunity to get their ass kicked by a superior opponent in the first round of the real tournament.

Rams over BUCCANEERS: Tampa got shut out by the Saints defense last week. It reminded me of this guy that solved a Rubik's cube blindfolded. Both tasks are seemingly impossible and neither resulted in any scoring.

PANTHERS over Raiders: Carolina is doing what every team hopes to do in December--they're playing their best football down the stretch. It's just too bad they played like the Panthers for the first three months of the season.

Patriots over JAGUARS: The most obvious "there's nothing to say about this one, so let's just trot out the Gratuitous Picture of the Week" game of the year. 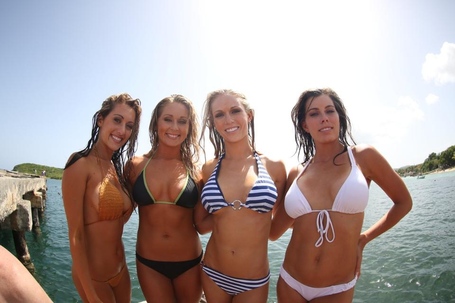 "The Jags will lose, more of the same, so this pic isn't even from a game!" (image via walloffamesports.com)

BRONCOS over Browns: Time for the weekly "Is that sad fact about Cleveland actually true?" game! Today's fact: the Browns are on the verge of their tenth consecutive season with double-digit losses. [Answer: false. It would only be their ninth time in ten seasons with ten or more losses.]

Bears over CARDINALS: That Chicago defense. That Arizona quarterback. We might have a game with over 60 points and no offensive touchdowns.

Giants over RAVENS: This game would have been a lot better about eight weeks ago when both teams were actually good.

49ers over SEAHAWKS: Seattle ran up 108 points the last two weeks on Rookie difficulty. I think they'll have a tougher time playing on All-Madden this week.