Win or lose on Sunday, Vikings fans should probably just be happy with a winning season. But when it's the Packers with a playoff berth on the line? No way.

Share All sharing options for: Week 17 Preview: Just Happy To Be Here?

A year ago, we were all wondering what we'd do with our high draft pick in April. Today, we're wondering if our team can get to ten wins and clinch a playoff berth.

A year ago, we were all wondering if Adrian Peterson would ever be the same player after destroying his knee in Washington. Today, we're wondering if AP can break the NFL single-season rushing record. (And whether or not he's actually human.)

A year ago, we were all wondering if Christian Ponder was actually our quarterback of the future. Today, we're wondering...

...OK, so maybe not everything is different this year.

But how fun is this?! Week 17. The Metrodome. Hosting our most hated rival. With a playoff berth and a possible NFL record on the line. It sure as hell beats getting a four-month head start on draft research, doesn't it? (Except for our draft guru Mark, of course.) Vikings fans couldn't really ask for anything more after last year. We slogged through a 3-13 season of Donovan McNabb ground balls. We endured going 0-6 against the NFC North. We watched through our fingers as defenders ran over our offensive line and wide receivers ran past our secondary. Even if the Vikings come up short against the Packers on Sunday, we should all be happy with the overall result, right?

Wrong. Not with this much on the line, and especially not against this team. If the Vikings do happen to end up out of the playoffs with a 9-7 record , I'm sure I'll look back and appreciate what they accomplished in 2012. Eventually. But I'm going to be good and pissed off for a while if that happens, and you should be too.

This is the Green Bay Packers we're talking about here. A team that the Vikings haven't beaten in over three years; their last victory over the Pack was Brett Favre's initial return to Lambeau. A team with fans that made the worst rap video of all time. A team that somehow surpassed Peyton Manning's seemingly unbreakable record of "Most Terrible Commercials That Get Shown 3,000 Times During Each Week Of NFL Football". (Child abuse is always terrible, but I'd be lying if I said that punching the smarmy little girl from the Aaron Rodgers State Farm classroom commercials has never crossed my mind.) I despise this team with every fiber of my being. I can't stand them.

I really can't stand the Packers because I live in the Twin Cities. This means I come into contact with way too many cheeseheads on a a daily basis. I work with a lady that has every square inch of her cubicle completely decked out in kitschy Packers memorabilia. I walk past an old 1996 Packers Super Bowl poster every time I head to the bathroom in my office. (Fitting, I know.) I'm friends with an unhealthy amount of Packer fans on Facebook, which means I'll have to deal with their online gloating well after the final gun sounds if the Vikings lose. It always means more when the Vikings play the Packers. With stakes like these, it means even more than usual.

It means a lot to both teams this time around. We know what's at stake for the Vikings--win and they're in. Of course there is a scenario where the Vikes can back in, but I'd be willing to bet we will know that it's win or go home by kickoff. (The Bears and Giants both play 4-11 patsies in the noon games. The Vikings would need both of those teams to lose along with Dallas in the night game if they lost.) Meanwhile, Green Bay has already clinched their second straight division crown, but they need a win to ensure a first-round bye in the playoffs. Or they could depend on Arizona beating San Francisco on the road, which is like depending on the Washington Generals to beat the Harlem Globetrotters. The beat-up Packers could definitely use the extra week to rest some crucial injuries.

However, the Packers have already started to get healthier in recent weeks. Clay Matthews is back. He sat out the game four weeks ago when AP ran roughshod through the Packers defense to the tune of 210 yards. Jordy Nelson looks to be on track to play. He was limited to only one catch for ten yards before tweaking his hamstring last time around. And the year 2009 has obviously returned: Ryan Grant is running the ball for Green Bay again. Swiss Army Receiver Randall Cobb is still iffy for Sunday, but the Packers will be healthier overall on Sunday. The Vikings will definitely be getting Green Bay's best shot.

We have to hope that the Packers will getting a better shot from Christian Ponder as well. You can never pin blame for a loss on one player, but Ponder came pretty damn close in the 23-14 loss at Lambeau. His two game-changing, drive-crushing interceptions along with a bunch of other poor passes were the main difference in a very winnable game. The Vikes don't need Ponder to match Rodgers yard-for-yard. What they do need is a much more efficient game with far fewer mistakes.

Minnesota's defense will need to step up their play as well. Green Bay held the ball for 38:30 and converted 9 of 16 third downs last time around. They must get off the field when the opportunity presents itself like they did in Houston last week. Jared Allen and Everson Griffen need to harass Rodgers as much as possible. Chris Cook, Antoine Winfield, and Harrison Smith need to hide A.J. Jefferson as much as possible lock down the dangerous Packers receivers. The front seven needs to make sure that Grant doesn't get going so Green Bay's offense remains one-dimensional. These are all tough yet feasible accomplishments.

We all know that a victory over Green Bay won't come easy. After all, this is still the Vikings we're talking about here. Nothing comes easy with this team. But I think they have what it takes to keep their momentum going and win a nail-biter. (Would it be too much to ask for this game to be decided by a last-second Blair Walsh 50+ yard field goal or Mason Crosby miss? Or would that be too serendipitous?)

No matter what happens on Sunday, we can be sure of two things: Vikings and Packers fans will still hate each other; and Minnesota surprised just about everyone with how well they did this year.

But if the Vikings win, we can be sure of two more things: the Bears would be out of the playoffs; and barring an upset by Arizona, we get to do this all over again next week in Wisconsin. And just maybe we can teach Aaron Rodgers how to win a playoff game in Lambeau again, since he has never done it. And just maybe we can post this picture about 7,000 times before the game as a reminder: 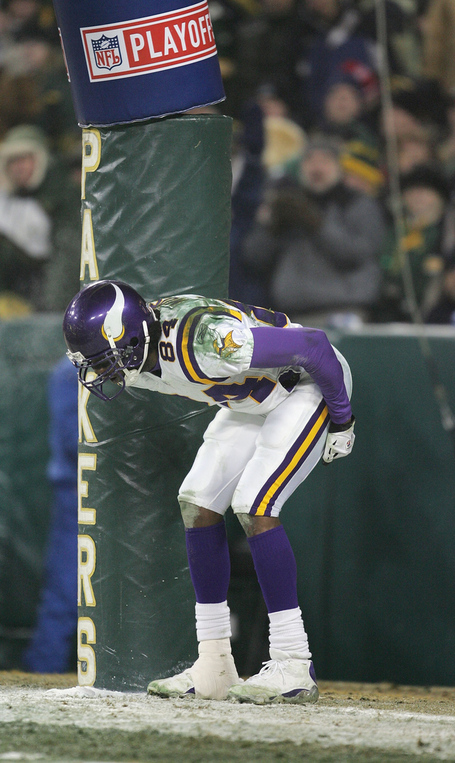 And now for the rest of my Week 17 NFL picks (home teams in ALL CAPS):

FALCONS over Buccaneers: If I was better at Photoshop, I'd totally make a "Caution: Bucs Falling" sign modeled after the "Rocks Falling" road sign to post on every Tampa Bay blog each December. Any takers?

BILLS over Jets: So New York is going with the butt fumbling Mark Sanchez again over the pouty Tim Tebow and the concussed Greg McElroy. Calling the Jets quarterback situation a circus at this point would probably get you sued by Ringling Brothers.

Ravens over BENGALS: Cincy is the sixth seed no matter what. Baltimore is hosting a Wild Card game next week no matter what. Sounds like a good time to throw in our Gratuitous Picture of the Week. 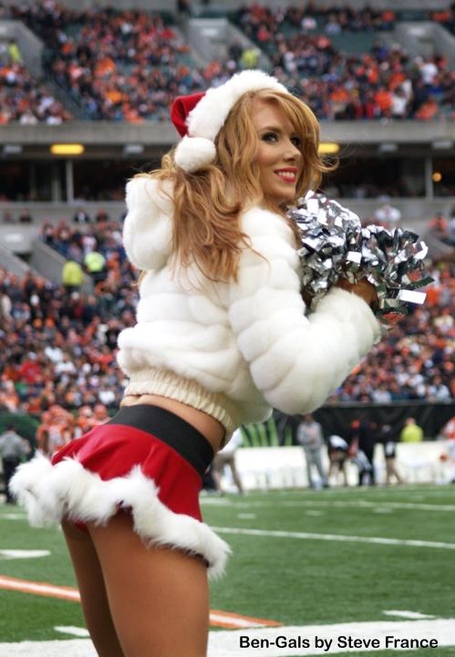 "Concentrate on us with every ounce, because nothing on the field even counts!" (image via prod.images.bengals.clubs.nflcdn.com)

Bears over LIONS: Calvin Johnson has a very good shot at 2,000 yards. His single-season receiving yards record will be hard to beat regardless of how many he gets on Sunday. But Megatron has already set another NFL record that most certainly will be added to this week: Most Garbage Time Yards At The End Of Disappointing Losses. That will be even tougher to break. (Unless of course Johnson breaks his own record next year. As long as he's on the Lions, that record will always be in play.)

TITANS over Jaguars: Remember when everyone thought the AFC South would suck this year outside of Houston? Turns out everyone got two out of three right.

Texans over COLTS: The Texans have never won in Indianapolis. They better do it now with the #1 seed on the line, because Andrew Luck is only going to get better.

SAINTS over Panthers: The battle for "If we didn't suck so bad the first two months of the season, we'd totally be kicking everyone's ass in the playoffs!" bragging rights.

GIANTS over Eagles: It's just more fitting to end the Michael Vick and Andy Reid eras in Philadelphia with a loss.

STEELERS over Browns: The last game of the season doesn't mean anything for either team. One of these fan bases is used to that.

BRONCOS over Chiefs: The top team on most power rankings hosting the bottom team of almost every power rankings. Should be a close one!

PATRIOTS over Dolphins: It's very possible that New England might be locked into the third seed by the time the second half rolls around. If that's the case, expect the Pats to let off the gas and only win by 20 or so.

49ERS over Cardinals: Here's a riddle for you: what mythological creature has four heads, eight legs, eight arms (four of which don't work), about eleven sacks, and is widely considered to be the ugliest being in the known universe? Answer: the Arizona Cardinals quarterbacks!

SEAHAWKS over Rams: What happens first: Pete Carroll takes it easy when his team is up big late in the game or Nicholas Cage says "no thanks" on a terrible script where his character has inexplicably bad hair? Trick question! Neither will ever happen.

REDSKINS over Cowboys: Screw the Masters--Tony Romo and the Cowboys pissing away a chance at the playoffs against a divisional opponent in the final week of the season is a tradition unlike any other.