Share All sharing options for: Stadium Update: Kurt Zellers Is Still A Tool 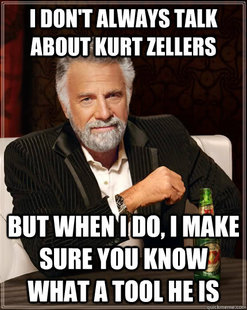 I can respect people who I don't agree with. And I can disagree with them without hopefully being disagreeable, at least I try to. But I still can respect the fact that they've taken a stand on something...no matter how stupid and utterly ridiculous I think their opinion might be.

Then there's Speaker of the House Kurt Zellers.

Kurt Zellers is someone I have no respect for whatsoever. Kurt Zellers is a guy that is the epitome of the modern day, 21st century politician, who takes no stand on anything until the polls tell him what he should think about a major issue. You wrap yourself in catch phrases, 30 second sound bites, and really don't say anything.

Minnesota House Speaker Kurt Zellers ended Friday the way he began it -- vague on how much he would do to help a plan for a new Minnesota Vikings stadium.

With an important legislative deadline having passed Friday, the Republican House leader remained unclear whether he would give the project a necessary procedural exemption to keep it alive at the State Capitol.

At one point Friday, Zellers was asked whether he could recall major legislation passing without the support of a House speaker. "I can't think of anything off the top of my head, but I'm sure there has been," he said.

Fergodsakes dude, grab your nutsack take a stand. If you don't like the stadium bill and are against it, just say so. If you do support it, let the House vote. Hell, if you're against it, let it get through the committees and give it an up or down vote on the floor, and lobby against it and try to defeat it.

Don't be the cowardly douchebag that you're being by being non-committal on it, and then when it fails, blame everyone but your own sorry ass.

I don't know if you're on a power trip because you're the Speaker of the House, or what your deal is. Your main argument against the stadium was that you could not support a bill that had tax increases, and that's a principled stand. I can respect that. And I actually agree with it, truth be told.

This bill doesn't raise taxes. So what's the problem?

I think my Dad summed you up best yesterday. My lifelong, died in the wool conservative Republican father, who has never met--or could even consider the fact that there is such a thing--as a 'dumb Republican',said about you, Republican Kurt Zellers, Speaker Of The House of Representatives for the great state of Minnesota:

"Son, I think he's the dumbest sonofabitch in Minnesota history. Even Al Franken isn't that stupid."

And just for reference, in my Dad's world, in rank order you have, in terms of the worst people ever:

When you lose people like my dad, Mr. Speaker, you lose elections. Just sayin'...