NFL Draft Day 2: What To Expect From The Vikings

Share All sharing options for: NFL Draft Day 2: What To Expect From The Vikings 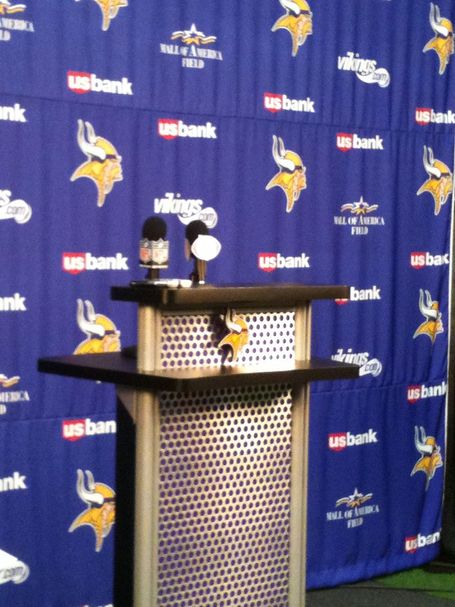 When Rick Spielman steps to the podium today, what will he say?

After a first round that saw the Vikings trade back one spot from #3 to #4, and then another trade to get back into the end of the first round at #29, what can we expect from the Vikings tonight?

Looking at what the Vikings have done this off-season, LT, Safety/CB, and WR were the biggest needs. Two of those were taken care of in the first round, and the Vikings feel that the draft is deep in both CB and WR, which means that they probably feel they could package some of their remaining 10 picks to get back into the second round.

How would that play out?

First, let's list the remaining picks the Vikings have:

As noted, the two compensatory picks at the end of the fourth round may not be traded, but the Vikings still have a high third round and a fourth round pick that they can move. With the way the Vikings wheel and deal, do not be surprised at all if the package those two picks and move up into the back half of the second round for a CB or a WR.

Looking at the NFL trade value chart, here are a couple scenarios I can see unfolding.

Most people project Johnson to go early in the second, but Jenkins and Robinson could very well be around, especially Jenkins. His character issues are noteworthy, but his talent is enticing. The Vikings have done their due diligence in the past with guys that have questionable character issues (Percy Harvin), and it worked out fine.

One of the things about the draft that never ceases to amaze me is how conventional wisdom gets turned on its ear, and guys you think will be long gone are still sitting on the board well past their expected shelf life. Now, if I had to place a bet, I would lay money that if the Vikings make a move back into the second round, it will be for a CB. Jerome Simpson filled a need at WR more than a Chris Carr signing at CB did, but the Vikes still need help there.

Like Johnson, I expect to see Randle go early in the second round, but can I see a scenario where Hill and/or Jeffrey are still sitting there at the bottom of the round? Yes, I do. I don't think the Vikes will make a move for those guys, because WR is deep. Iowa WR Marvin McNutt, for example, could probably be had in the fourth round, and I really like him.

Whatever the Vikings do, don't expect them to stand pat. If Spielman can find a willing trade partner, he'll move picks to get a guy he thinks can compete for a starting job right away.

Either way, it's going to be interesting.