Share All sharing options for: Okay, One More Stadium Story 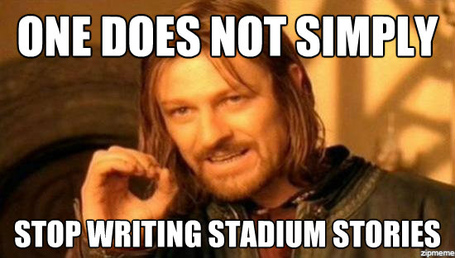 So earlier today, in my haste to write something about anything other than the stadium, a strange sensation came over me. I got cotton mouth, my body started shaking uncontrollably, and then I blacked out. When I awoke, my family and friends were sitting around me in a circle, and they decided to intervene.

One of the things I learned in Stadium Story Rehab is that some people just can't quit cold turkey, and my writing counselor told me that I should ease out of it. That might help prevent a relapse further on down the road, and I thought maybe my counselor is right.

So with that in mind, I'll have to sprinkle some stadium stories in from time to time, and this is my first post-Stadium Getting Approved Stadium story.

One of the priorities of the Wilfs is getting a Super Bowl for THE NEW VIKINGS STADIUM, WOOOOOOO!!! (it still isn't old for me, how about you?), and they feel that they have a better than decent shot.

"I know the Super Bowl process typically happens in the spring," (Mark) Wilf said, "so potentially as soon as a year from now we could be a bidder. We haven't talked to officials about it yet, but we see no reason why we wouldn't be ripe to put in a bid for a Super Bowl, and we're hopeful and we'll do everything we can as owners to persuade our partners that it's a great community, and have a Super Bowl here hopefully as early as 2017."

Besides pro football's ultimate game and the NCAA Final Four, one of the things that no one really mentioned is the Big Ten football championship. Having a new, state of the art facility in one of the premier cities in the Midwest will put Minneapolis back on the sports map in terms of hosting major championship events, and if college football ever decides to go to a playoff format, the new stadium could be a leading candidate for a neutral field playoff site.

To bring it back full circle, I think a Super Bowl will be a given, unless the new stadium is just one of the crappiest new facilities in sports history.

But I have a feeling that with Mark and Zygi Wilf in charge, that's going to be one thing we won't have to worry about.

Oh, one last note. I mentioned it a little bit in the Stadium SMR, but thank you. Thank you for getting active, getting on the phone, and sending those emails. WE did it. WE helped to make this a reality. WE helped to make history, and when we're tailgating and walking through the Vikings Hall of Fame in September of 2016, we'll be able to say that WE helped make this possible.

It's easy to be a fan when you're cheering for a winning team, but sticking with a 3-13 club teetering on the verge of relocation? You hold your head up with pride when you tell somebody you're a Vikings fan, because just as many 'fans' that jumped on the 2009 bandwagon just as quickly bailed in 2010 and last year.

You guys are awesome, and I've never been prouder to be a fan of the Minnesota Vikings.

Someday, we'll get to know the feeling of winning a Super Bowl; I firmly believe that. After yesterday, I have an idea of what that will feel like.

Everyone have a safe and Happy New Stadium Weekend.