Share All sharing options for: Another Vikings Stadium Design Idea

I've been trying to envision in my head what I would like the new Vikings' stadium to look like once it gets built. While I don't have the first clue about stadium design or anything like that, while I was bopping around the television dial this afternoon, I saw one that I think would be kind of cool.

Today, the soccer world is focused on the Champions League final between Bayern Munich and Chelsea. The game is taking place in the stadium pictured above, that being Allianz Arena in Munich, Germany. I know that it probably isn't everyone's cup of tea, but I think the stadium looks pretty cool.

According to Wikipedia, the stadium can seat between 66,000 and 69,000 people, which is the range the Vikings are looking for. One of the things I like about it. . .and this is probably somewhat shallow, but that's fine. . .is the fact that the stadium actually has the ability to change colors. Observe: 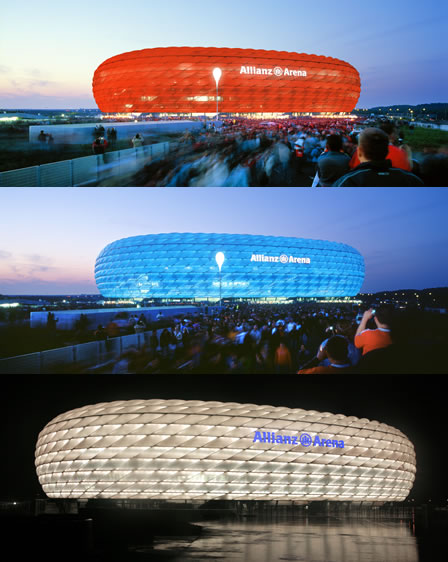 Think about it. . .how cool would it be for the Vikings' new stadium to actually be lit up in purple and gold on game days? I think it would look pretty amazing. If you look at this story from WorldStadiums.com on the design of the arena, it actually has a couple of pictures of a "split color" look for the stadium.

According to the article, the construction cost of the stadium was about 340 million euros, or approximately $435 million American. Now sure how hard it would be to fit a roof onto something like that, let alone a retractable one, but I'm sure something could be worked out. I, personally, think it would be pretty cool if the Vikings' new home was modeled after something unique like the Allianz Arena.

Do any of you folks have stadiums that you'd like the Vikings' new home to be modeled after?