Share All sharing options for: The All Time Greatest Vikings Team Tournament

Ah, the summer doldrums. OTA's and mini camps are just about over, training camp is over a month away, and so barring a boat ride on Lake Minnetonka or a DUI here and there, we're forced to come up with some creative ways to keep you, the reader, coming back for more.

So what we're going to do is figure out what the greatest Minnesota Vikings team of all time is, using the way cool website whatifsports.com, a site that allows you to match up historical teams against one another.

Now, I'll be honest: I completely ripped off this idea from former Off Tackle Empire colleague Bama Hawkeye, when he started this over at OTE back in February to try and determine the best B1G team since 1996.

So, I thought, this might be kind of a fun experiment to do for the Vikings. True, we've never had a team win it all, but this franchise has produced some of the best teams and players in NFL history. So, after the jump, I'll explain how this is going to work, what individual teams I picked, and the methodology I came up with.

How many teams did you pick, and why?

Twelve. My initial thought was 16 teams, but it was hard to find 16 truly great teams. Same with 14, but 12 seems to work out best. It allows the 4 Super Bowl teams to get a first round bye, and gives us some really great match ups for our preliminary games.

So you seeded the teams? What was your methodology?

Yes. Like I said, the four Super Bowl teams each earned a bye, with the 1969 team getting the #1 overall seed. There's something to be said for the 1998 team to get a first round bye, but they didn't make the Super Bowl. Results count, in a manner of speaking, and it can be argued that a 4 loss Super Bowl team (the 1974 team) went farther than the 1998 team should've. As for the remaining seeds, well, it's pretty much my opinion. Trust me, it's searing logic and solid analysis, but at the end of the day it's still my opinion.

So, what are the parameters of playing the games?

Like I mentioned earlier, I'm using the What If Sports simulation engine. I will play one game, in the Metrodome, and it will be a 'neutral site' location for both teams. As much as I wanted to (and I mean I REALLY wanted to) give the Purple People Eater-era teams a home game Met Stadium, in the winter, in really cold weather with snow (if they were the higher seeded team), I think the fairest, most accurate assessment is in the Metrodome as a neutral site. Let's face it, as much of a home field advantage Met Stadium was in November and December, that was at most 2 or 3 games a year where that came in to play, minus the playoffs.

I am playing a single game simulation--not a best of 5, best of 7, or some other 'best of' series. Why? It's football. In the NFL, they don't play a best of 5 or a best of 7. They play one game, winner take all. That's what we're going to do here.

If we were making bets, who would you like? Who would be your darkhorse?

In my heart, I think the 1975 team (the Hail Mary victim team) was the best of all of them. They had the #1 rated offense and defense in the NFL that season and were felled by the most infamous non-call in post season history. But that 1998 team had an offense that was as close to unstoppable as I've ever seen.

If I had a darkhorse, it would probably be either the '87 or '89 team. 1987 is kind of overlooked because of their record (8-7), but that was a strike-marred season and three of those losses were from the roster of replacement players. 1989 had probably the best single season defense of the non-Purple People Eater era, with Henry Thomas, Keith Millard, and Chris Doleman wreaking havoc up front, and Joey Browner, Scott Studwell, and Carl Lee wreaking havoc in the back seven.

How can I trust you that you won't simulate a game until you get an outcome you like?

You can't. Just take my word for it that I won't. I mean c'mon, at the end of the tournament the Vikings win, so it's all good.

So, what are the seedings?

#1 seed, first round bye: 1969. They were the last NFL champion before the merger with the AFL, and were upset in SB IV by the Kansas City Chiefs. The famous 40 for 60 team that was, by almost all accounts, the best in franchise history.

#2, first round bye: 1973. NFC champions, lost SB VIII to Miami. Started off 9-0 and rolled through the divisional playoffs.
#3, first round bye: 1976. NFC Champions, lost SB XI to Oakland. Just a great team, and the last truly great team of the Purple People Eaters era.
#4, first round bye: 1974. NFC champions, lost SB IX to Pittsburgh. Probably the weakest of the 4 Super Bowl teams (10-4 record), but were ironically the only one of the four with a chance to win the game in the 4th quarter.
#5 seed, 1998. 15-1, lost NFC Championship game. Statistically the best Vikings team in history in terms of regular season W-L record, and they set an NFL record for points scored in a season. Man, what a great team.
#6 seed, 1975. 12-2, lost the infamous 'Hail Mary game. Many old time Vikings fans (myself included) think this was the best team the Vikings ever fielded. They had the best offense and defense in the NFL, and seemed unstoppable. I hate Drew Pearson.
#7 seed, 2009. 12-4, lost NFC Championship. The Brett Favre revival was just one hell of a fun time to watch, and that '09 offense was about as good as any in team history, save the '98 offense.
#8 seed, 1987. 8-7, lost NFC Championship. Take away the three games played with replacement players, and this was an 8-4 team. Anthony Carter went nuts in the playoffs, and were a dropped pass at the goal line from going to overtime in the NFC championship game.
#9 seed, 2000. 11-5, lost NFC Championship. This team is remembered for their infamous 41-doughnut NFC championship game, but this was a better team than that. They sowed the seeds of their own destruction by failing to clinch home field, though. All they had to do was win one of their last three games, and they couldn't.
#10 seed, 1977. 9-5, lost NFC Championship. The last hurrah for the Purple People Eaters,they were able to make it to the NFC Championship, but had to overcome injuries to Fran Tarkenton and the advancing age of the core of their team--Eller, Page, Tingelhoff, Marshall and company were well into their 30's and on the downside.
#11 seed, 1989. 11-5, Division winner. Henry Thomas, Keith Millard and Chris Doleman had 50 sacks between them, and I would argue that this was the best non Purple People Eater defense in franchise history. Their offense was an achilles heel, though, but the Herschel Walker trade was supposed to fix that six weeks into the season.

#12 seed, 1970. 12-2, huge favorite but lost to SF in playoffs. The post-Joe Kapp team was almost as good, but according to my Dad was missing something. Gary Cuozzo was good, but he wasn't Kapp. Talk to my Dad and he'll tell you that if Kapp had been on that team they would've won it all that year. So, your all time bracket is: 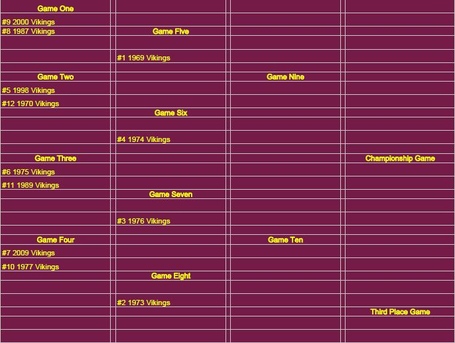 I have to tell you, I'm really looking forward to this, almost as much as our all time draft.
We'll have our game one results tomorrow!