The 2000 Vikings started off like gangbusters, storming out of the gate at 11-2 and looking almost as good as the 1998 team at times. And what was all the more impressive was that they were starting an untried quarterback, second year guy Daunte Culpepper. There was very little confidence in DC before the season. He looked absolutely lost in his few appearances in 1999, and Denny Green tried to get Dan Marino to come out of retirement to play one more year. Marino declined, and the Vikings got their roll on with DC, who ended up having an outstanding year, passing for almost 4,000 yards, 33 TD's, while running for almost another 500 and 7 TD's.

But with only one win needed in their final three games to clinch homefield advantage, the Vikings couldn't do it, losing in succession to St. Louis, Green Bay, and Indianapolis. Those losses exposed the Vikings defense, especially a suspect secondary, to superior offenses in the process. They still won the division and beat the New Orleans Saints in the divisional round, but, well, the NFC Championship was a bit different.

The 1987 team is one of the more overlooked teams in franchise history, primarily because of their 8-7 record. However, three of those losses was during the player lockout when replacement players were used for almost a month (long live the Tony Adams era!). But take those three losses away, and the 'regular' players were 8-4, and had some convincing wins, including wins over Denver (eventual AFC champion) and a wild OT win against Dallas on Thanksgiving. But they lost 3 of their last 4 and backed into the playoffs, and no one thought they would make much noise.

Oh, how wrong they were. They curbstomped New Orleans (they f***ked those guys!), who was making their first ever playoff appearance, and then, thanks to Anthony Carter, they orchestrated one of the greatest upsets in post-season history, upending heavy favorite and presumed NFC champion San Francisco, 36-24 in San Francisco. Their performance was so dominant, Bill Walsh benched Joe Montana in the second half. The impossible dream ended the next week in Washington, but it was an impressive run.

This was a close game for awhile, but the absolutely terrible secondary in the '00 team couldn't handle Leo Lewis and...James Brim??

The first quarter was a series of miscues that the 1987 team was able to take advantage of. They took the opening kickoff and went 71 yards on 11 plays, culminated by a 9 yard pass to Brim from Wade Wilson. Daunte Culpepper threw an interception three plays later, and the '87 team wasted no time, as Wilson found Steve Jordan for 9 yards. In the second quarter, the Vikings took advantage of a Wade Wilson interception to narrow the score to 17-10 going into the locker room, and tied it up on a 39 yard pass to Randy Moss early in the third.

But in the fourth quarter, the '00 team was undone by two critical errors. After the '87 team went 87 yards on 14 plays to take an early 4th quarter lead, Jim Kleinsasser caught a drive sustaining first down on 3rd and 7, but was called for offensive pass interference. '00 couldn't convert after the penalty and had to punt, but got some momentum back when they held '87 on 4th and 1 at the '00 25. A field goal would've been huge at that point, as there was only 4:39 left, so '00 was given a golden opportunity to tie the game.

Unfortunately, Robert Smith fumbled the ball on second down, '87 recovered, and put the game out of reach with a 12 yard pass to Leo Lewis with just over 2:00 to play. Overall, the game stats were (click on any pic to enlarge for better reading): 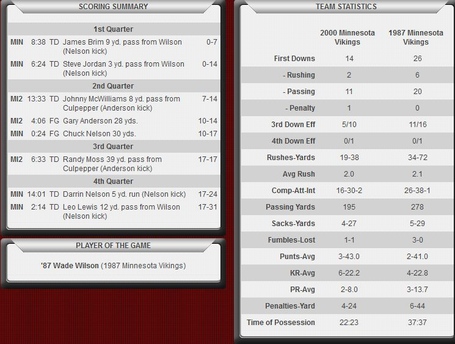 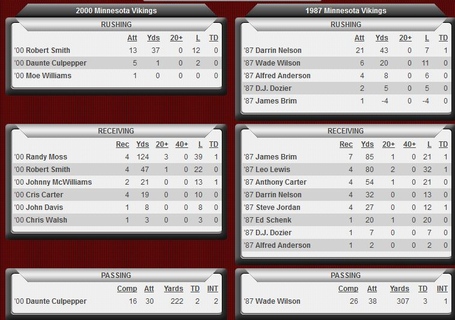 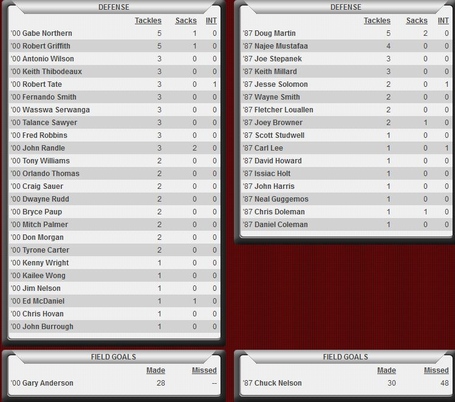 Randy Moss had a big game, but the 1987 team took advantage of a huge time of possession advantage, sustaining long scoring drives and keeping the '00 offense off the field. And when they were on the field, '00 turned it over at critical times, allowing the 1987 team to win a game that was a little closer than the scoreboard shows.