With game one of our all time tournament in the books, we roll on with game two, the #5 seeded 1998 team against the #12 seeded 1970 team. This really seems like a mismatch on paper, but good defense beats good offense, and the 1970 Vikings version of the Purple People Eaters was one of the best of that era.

12-2, NFC Central Division Champions, lost to San Francisco 17-14 in the Divisional playoff round

This was the year after the famed '40 for 60' group that won the NFL championship and advanced to Super Bowl IV. They were largely the same group of players, save for one--Joe Kapp. Kapp had become embroiled in a contract dispute after the 1969 season, and instead of paying him more money, the Vikings exiled him by trading him to the Boston Patriots. Gary Cuozzo took over, and while they were still very good, it wasn't the same, at least if you ask folks like my Dad. Statistically, the passing offense was about the same in yards and scoring (and they were very good), but the amount of scoring through the air dropped--Cuozzo only had 7 TD passes in 1970 compared to 18 for Kapp the previous year. And Kapp's leadership, something that can't be measured, was missing. And if you talk to fans who are old enough to remember (I'm not) they'll tell you that was a HUGE difference between the '69 and '70 team.

But oh my, the defense. They were the #1 defense in the NFL, and this was arguably the best defensive unit of the Purple People Eaters era. They were the #1 scoring defense, #1 against the pass, #1 in yards given up, #1 in passing TD's given up (6), #2 in interceptions (28), #5 in rushing defense, and #1 in rushing TD's allowed (5). That's right, in 14 games, the defense only gave up 11 TD's. This defense was as terrifyingly good as the offense they're about to face.

1998 is simultaneously one of the finest yet most disappointing seasons in franchise history. It started off on draft day, when Denny Green took a big risk on talented but troubled WR Randy Moss. It was really panned at the time, because the last thing the Vikings needed, apparently, was a WR. Both Jake Reed and Cris Carter were coming off of 1,000 yard seasons, but oh...my was it the right call. Moss was the spark that ignited the most explosive offense in NFL history up until that time, setting league and/or team records in yards and points. QB Randall Cunningham came off the scrap heap and had an MVP--type year after Brad Johnson was hurt in week 2, Robert Smith finally stayed healthy, and along with Leroy Hoard became the best running game in the business. Oh yeah, Cris Carter wasn't too bad, either.

The defense was good but not great, and for all but two games, that's all they needed to be. John Randle anchored the line, Ed McDaniel was a standout LB, and CB Jimmy Hitchcock came out of nowhere and had a fantastic season as a CB. This team took on a 'team of destiny' feeling about early on, and carried that vibe until...well, you know. Still, this is one of the best teams in NFL history.

We have the proverbial irresistible force (the 1998 offense) against the immovable object (1970 defense).

From there, the game got out of hand for '70. Gary Cuozzo threw an interception right after the kickoff, and Jimmy Hitchcock returned the ball to the '70 10. Three plays later Leroy Hoard scored his second TD, and the rout was on. The teams traded field goals to end the half, and with a field goal by Gary Anderson and a 26 yard TD run by Robert Smith, '98 put the game out of reach by the end of the third quarter. 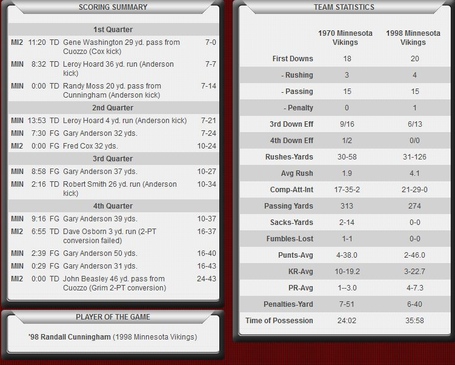 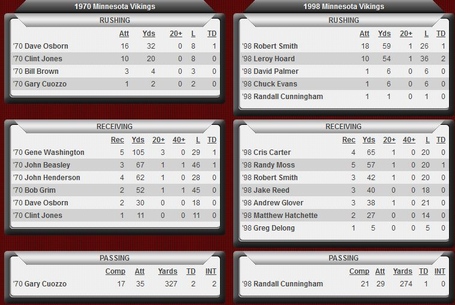 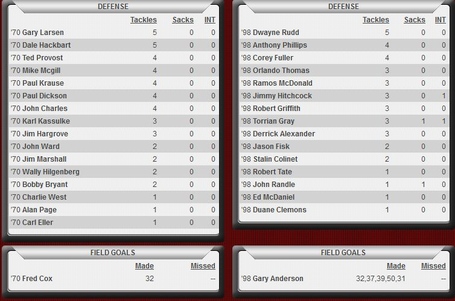 One of the things that stood out for me was how much the Purple People Eaters defensive line was shut down in this game. They were unable to record a sack, and that made me remember how good the '98 offensive line was. Steussie, McDaniel, Christy, Dixon, and Stringer (RIP, big man) didn't match the longevity of that unbelievable offensive line from the late 60's and most of the1970's (Yary, Tingelhoff, Alderman, Ed White), but for about a three or four year period they were just as good.

And we'll have that game for you tomorrow!