Why do I show this highlight from 1975? Because it was the first game I went to at Met Stadium

Our all time tournament continues with another game that seems to be a foregone conclusion, but as we know more than most fanbases, favored teams don't always perform like we expect. The #6 seed, the 1975 team, takes on the #11 seed 1989 club.

The Minnesota Vikings of the late 1980's were talented but star crossed teams in many ways. They made a run to the NFC Championship in 1987, went 11-5 in 1988 and won a playoff game, and it was felt that all they needed was a big time running back to make the offense hum and become a legitimate Super Bowl contender in 1989. So right before the trade deadline, GM Mike Lynn pulled the trigger on the most infamous trade in NFL history, trading for Herschel Walker for about 137 draft picks and eleventy two players. It seemed genius at first, as Walker rumbled for 148 yards against the Packers in his first game as a Viking, but offensive coordinator Bob Schnelker didn't tweak the offense to suit Walker's skill set, and the Vikes offense went back into the same familiar pattern of inconsistency and inability to score inside the red zone. Walker was unfairly blamed, and the good time vibe the fans had towards Herschel quickly faded.

But the reason I picked this team for the tournament is because of the defense. Chris Doleman, Keith Millard, Al Noga and Henry Thomas formed what was the best defensive line in football, and for a couple seasons, they produced on par with the famed Purple People Eaters. Doleman had 21 sacks, Millard had 18, Noga had 11.5, and Thomas had 8, making them far and away the most ferocious line in the NFL.

Until the Vikings win the Super Bowl, the younger generations of Vikings fans will be haunted by 1998, or maybe 2009. For fans who were around in the days of the Purple People Eaters, we will always be haunted by this team, this year, and that one play, and nothing else will come close. The Vikings had been to two straight Super Bowls, and a 16-6 loss to Pittsburgh in SB IX seemed like 'one that got away'. The '75 team started out 10-0, had the best offense in the NFL, the best quarterback in MVP Fran Tarkenton, and the most versatile running back in Chuck Foreman, who ran for over 1,000 yards and caught 73 passes, an NFL record for a running back at the time.

The defense was getting long in the tooth, but the Purple People Eaters were still the #1 defense in the NFL, and Paul Krause was second in the NFL with 10 interceptions. The offense lead the NFC in points scored, were second in the NFC in points allowed to the Rams, and it also marked the first time I saw the Vikings play at Met Stadium. After coming so close in '73 and '74, many, many people felt if the Vikings were going to win the Super Bowl, it was this team that was going to do it.

Let's see who wins this, shall we?

Folks, we were thisclose to having our first huge upset in the tournament, but the 1975 squad scored a TD with :30 left to seal the victory. After exchanging punts, Keith Millard intercepted Sir Francis of Bloomington, and '89 had the ball at the '75 16 yard line. But true to form, the offense couldn't move the ball in the red zone and had to settle for a Rich Karlis FG. This would be crucial later on. '75 took the ensuing kickoff and went 67 yards in 8 plays for a TD, as Tarkenton hit Ed 'Hill Street Blues' Marinaro for a 31 yard score. The play was described thusly:

Tarkenton tosses the ball out to Marinaro. Catch is good and Marinaro speeds down field and into the endzone.

Couple things here. Fully buy a short pass to Marinaro out of the backfield. The Vikings ran the West Coast Offense before anyone. But Ed Marinaro never sped anywhere. The only thing I can imagine is that the linebacker fell down, and the rest of the defensive backs were covering John Gilliam and Chuck Foreman, leaving the field wide open for Marinaro to walk in. If you watched the YouTube highlight above, you know the RB getting stuffed at the line early on, #49? Marinaro. But I digress.

After exchanging a few punts, '75 was able to put a Fred Cox field goal on the board to take a 10-3 lead. It stayed that way right before the half, when '89 got the ball at their 45 with just under a minute left. And then the Rick Fenney show began. He caught passes of 8, 14, and 13 yards. Herschel picked up 9 on a sweep, and then Wade Wilson hit Hassan Jones from 11 yards out to tie it up at 10 going into the locker room.

'75 picked off Wilson early in the third quarter, and Tarkenton hit Jim Lash on a 29 yarder to take a 17-10 lead. After forcing '89 to punt, they added another field goal for a 10 point lead at the close of the third quarter.

As the sun began to go down on the Bloomington prairie and the cold began to envelop the crowd at...the folks in the parking lot of the Mall of America, because we're playing these games at the Metrodome...the '89 team scratched and clawed against one of the greatest defenses in NFL history and took a late lead. Wade Wilson took '89 on a 10 play, 74 yard drive that ended with Anthony Carter bringing in a 20 yard pass. Nate Wright swore AC pushed off, but it wasn't called. After a 3 and out, '89 went on another march, and The Herschel Walker Trade finally paid off. Herschel went for 44 yards on a 3rd and 4 from the '89 20, and culminated the 8 play drive by taking it in from 20 yards out on a pitch out. A missed extra point left the score at 23-20 with 2:00 to play.

And Chuck Foreman showed why he was the best running back in the NFL in 1975. He had an 18 yard run nullified by a penalty, but Fran Tarkenton hit TE Stu Voigt on a crucial 28 yard pass on 3rd and 20, and with '89 looking for a pass, Foreman took a draw and ran it in from 30 yards out, scoring the clincher with :39 left. Your game stats (click to embiggen): 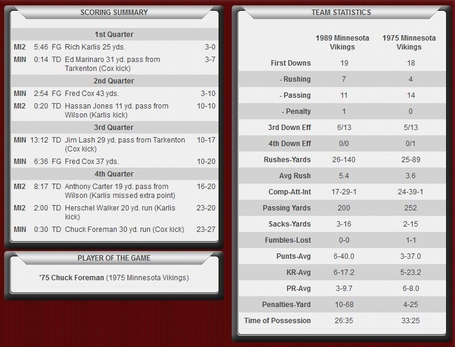 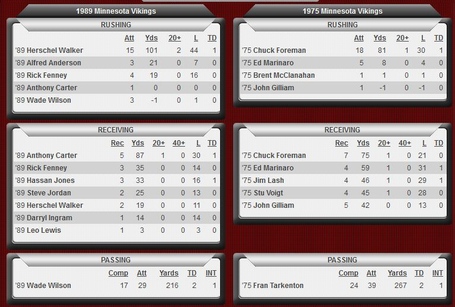 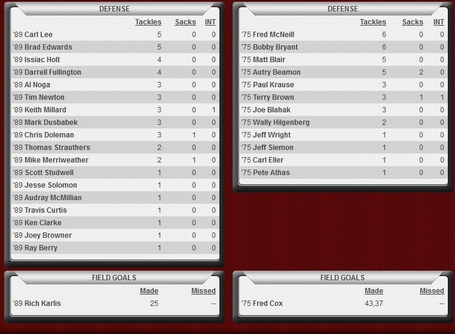 So '75 avoided what I think would've been a huge upset, and lives to fight another day.

They'll move on to face themselves, essentially, as they meet the 1976 Vikings, the last Vikings team to win an NFC Championship and play in a Super Bowl. Yeah, that boxscore won't be too tough to read, will it?

Our next game? It's our last one of the first round, as the 2009 Flying Favres take on the 1977 Vikings, who also lost in the NFC Championship to Dallas. And we'll bring you that game tomorrow!