When The Percy Situation blew up yesterday, 99% of me thought that this would all be resolved with Harvin remaining a Viking, and that it would be not much more than something to talk about during football's silly season.

But as a long time Vikings fan, the inner doom and gloom in me couldn't help but think...well, what if Harvin does get traded/sits out in 2012? For now, it seems to be All Quiet On The Harvin Front, but to say things have been resolved is premature. So on the outside chance that the worst does happen, where will the receiving corps be? Outside of Michael Jenkins, the Vikings really don't have any known quantities, but they do have some raw talent in the form of 4th round draft picks Jarius Wright and Greg Childs, late of the University of Arkansas.

So I thought it might be a good idea to find out more about two guys who, if our nightmare scenario were to pan out, could potentially be the #2 and #3 receivers for your 2012 Minnesota Vikings. It's one thing to read scouting reports and see a couple of highlight reels on ESPN or the NFL Network; it's something else entirely to get the lowdown from a guy who watched almost every play that these guys had in college.

So with that, may I present my conversation with Arkansas uber blogger Doc Harper, contributor over at the fine SB Nation Razorback blog Arkansas Expats. Doc was kind enough to give me some pretty great answers about two guys that might end up being significant contributors to the Vikings passing game sooner than a lot of us thought.

I was cautiously optimistic about these guys before, after Doc's insights I'm downright giddy.

DN: One of the needs the Vikings had entering the draft was wide receiver. In the fourth round, they addressed those needs by drafting Arkansas WR's Greg Childs and Jarius Wright. Just give me your general impression of both guys--did you like them, were they good team guys, and how were they viewed by most of the Razorback fan base?

AE: Both of them are absolutely beloved by Razorback fans. They were part of a special recruiting class that stuck with Arkansas without wavering from their commitments as the Hogs underwent a coaching change after the 2007 season. They were forced by need to play as freshmen, so Arkansas fans literally got to watch them grow and develop throughout their college careers. And even though their individual stats may have been higher if they’d played on a team without as many great receivers as Arkansas had, there was never any complaint about needing more touches. That unselfishness helped allow Arkansas’ passing attack to thrive and was a big part of why the Razorbacks have been as successful as they’ve been the last few years. 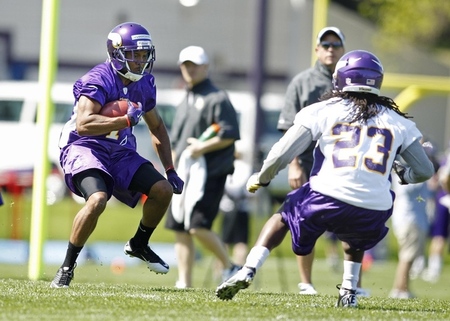 DN: When Wright was picked, most Vikings fans looked at him as 'Percy Harvin Light', a smaller, speedy slot type guy that can create havoc in the middle of the field. Is that an accurate assessment, and is that how he was used at Arkansas? And how good of a deep threat is he?

AE: I don’t really buy the Percy Harvin comparison. They’re similar in size but I think Harvin is probably a little faster and quicker than Wright. Wright isn’t as slippery in the open field as Harvin - that was more of Joe Adams’ role at Arkansas. Wright’s success came from running precise routs, whether they were deep routes, short crossing routes, post routes, fades, etc. He can definitely go deep. He averaged 17.5 yards per catch for his career. He can streak down the sideline or find holes in the middle of the field.

DN: Greg Childs seems to be somewhat of a risk to most Vikings fans. He had a great 2010 campaign, but was slowed with a torn patella and had a sub par season in 2011. If he's healthy, what type of player did the Vikings get? Deep threat, possession receiver, or something in between?

AE: Even when he was healthy, Childs was overshadowed in the SEC by A.J. Green and Julio Jones, both because of how talented they were and because Childs was splitting catches with Arkansas’ other guys. But before Childs got hurt, he was right up there with those guys. He was good enough that Razorback fans were expecting him to declare for the draft in 2010 until he hurt his knee. He could do it all. I’d recommend watching him in the 2010 Auburn game. That was just a couple of weeks before the injury and you can see what a dominant player he was.

DN: What is the biggest strength and weakness each guy has, and do you believe either of these players are starting WR material down the road?

AE: In addition to his speed and precision, Wright absolutely never gives up on a play. One of the most underrated parts of his game was how often he’d land a huge block to free another player racing downfield to score. We call them "touchdown blocks". In fact one of my favorite plays of his was with Childs in the 2009 Florida game. Childs caught a deep pass, then sprinted with the Florida DBs down the field (Childs’ speed was underrated too) and just as they’re about to catch up to him near the goal line, Wright comes in for the big block to free Childs into the end zone. You can see the play at the 1:40 mark of this clip. Wright made a few other plays like that as well.

Childs was a work horse. He wasn’t as highly touted coming out of high school as Wright was, and he struggled a bit early on in his career. Coach Petrino had to have a meeting with Childs and his parents and explain how much potential Childs had if he just put the work in, and since that point, Childs has been a star. As for weaknesses, they have both dropped some easy passes (but not too many) even though they’ve both made circus catches. And of course, we haven’t seen Childs full speed since his injury. He improved throughout 2011 and did well at the combine, but how well he can play on the field will be questioned until he can prove he’s back to 100%.

DN: Let's assume both players are 100% healthy for this question. Of the two, which one would be your 'go to' guy to get that critical third down, or make the clutch catch with the game on the line, and why?

AE: I’d go with Childs. His size makes him more versatile and he was that ‘go to’ guy before he got hurt. If you look at that 2010 Auburn performance, or his game-winning catch-and-run against Georgia that year, as well as the Georgia and LSU games his sophomore year, you’ll see a pattern of big plays in big moments both at home and on the road. I love both of them, and Wright really proved his importance to the receiving corps in 2011, but when Childs was healthy, he really stood out.

Thanks again Doc, and if you're an Arkansas fan and you don't have Expats bookmarked in your favorites, you're in the wrong.