We come to the end of our first round games with what is arguably one of the most entertaining teams in franchise history going up against the last good team of the most dominating era in franchise history. Both advanced as far as the NFC Championship, and neither were really expected to at the beginning of their respective seasons.

Sentimentally, this will probably end up being my favorite Vikings team of all time, even over the Purple People Eater teams and the '98 team. I loved the Purple People Eater era, but we expected them to be good. The '98 team I didn't get to see wire to wire, and had been out of the country for three years, so I was catching up on a lot of stuff besides football. With this bunch, their run just came out of nowhere, and it was made all the sweeter that the guy largely responsible for it was making fans of our arch rival sick to their stomach almost every week. Brett Favre turned back the clock and put on a show for the ages, and he took us on a ride that I loved almost every damn minute of.

No one knew what to expect, and when Favre signed with Minnesota, it was surreal seeing him in purple. My Dad and I knew that if Favre could stay healthy, this was probably our last chance to win a title in his lifetime, so we went all in--we both bought Favre jerseys, we got tickets to see the Vikes play in St. Louis, and we didn't miss a game. We had just moved him up here, so it was the first time him and I had been able to watch Vikings games together every week since I was a kid. When Favre hit Greg Lewis to beat San Francisco, we flipped out. We knew we were in for a special season, and we weren't disappointed. Yeah, they didn't win it all, but I'll never look back at that season with disappointment. It was a fun ride, from start to almost the finish.

But Favre aside, this was a very good football team. Rookie of the Year Percy Harvin brought an electrifying dimension as a receiver, occasional runner and a returner, Sidney Rice had a monster year as a wide receiver, and Adrian Peterson continued is ascent as the best running back in football. On defense, the pass defense was suspect, but the Vikings had one of the best pass rushes in the NFL, thanks to Jared Allen, and the Williams Wall was as good against the run as anyone.

1977 was the final hurrah for the mighty Purple People Eaters. It would be the last season Carl Eller, Alan Page, and Jim Marshall would play together. Eller would finish his Hall of Fame career in Seattle the next season, and Page was released by the Vikings early in the '78 season and finished his career as a Chicago Bear. Marshall would retire with the Vikings at the end of the 1979 season. Everyone was old, on both sides of the ball, and Fran Tarkenton suffered a broken leg against the hapless Cincinnati Bengals, causing him to miss the last 5 games of the regular season and the playoffs. Chuck Foreman was still a Boss, but the vaunted, almost impregnable defense was starting to crack. They got blown out by good teams, they could be run on consistently, and they just looked old and slow at times. Teams ran right at Alan Page with a lot of success all year, something that was unthinkable just a few seasons before.

After Tarkenton was hurt, they hung on to win the division, and beat a heavily favored Los Angeles Rams team in L.A. in the famous 'Mud Bowl' playoff game, 14-7. And really, if you ever get a chance, go back and look at some of those 1970's playoff games against the Rams. I think the VIkes won almost every one, but that was some quality football. The Rams-Vikes were one of the biggest rivalries in the NFC in the 1970's, and you can actually watch the entire Mud Bowl on YouTube. But against Dallas in the NFC Championship, Robert Newhouse and rookie Tony Dorsett ran over the Vikings, and without Tarkenton, they really didn't have a chance. So the Purple People Eaters era ended, not with a bang, but with a whimper.

Can the old men of the Purple People Eaters stop the old man of the 2009 team? Let's find out!

Our first overtime game! Brett Favre outduels Francis Tarkenton, and 2009 pulls it out:

This was a whale of a simulated ball game. '77 got the opening kickoff and and drove to the '09 31, but Tarkenton was intercepted by Kenny Onatolu. '09 took advantage of the turnover, going 72 yards in 7 plays for a TD. The highlight of the drive was a 48 yard screen pass to Adrian Peterson, and the drive was capped by a three yard toss to The Percy Situation. '77 shook off the turnover, and went on a methodical, 9 play 81 yard TD drive capped by a 2 yard plunge by Foreman.

'09 received the ensuing kickoff and marched down the field, and that drive was capped by another Percy Harvin TD reception. Not to be outdone, '77 matched that TD drive with one of their own, capped by a Stu Voigt TD, but Fred Cox missed the extra point. As the half came to a close, '09 held a 14-13 lead.

The second half saw much the same see-saw action: '09 took the opening kick and scored on a 16 yard Adrian Peterson run, '77 countered with a quick, 5 play drive that ended when Brent McClanahan rumbled 46 yards on a screen pass to pull '77 back within a point. After exchanging a few punts, '77 got the ball in the 4th quarter and went on an 8 play drive to take the lead when Chuck Foreman went over from the 6. After a Brent McClanahan two point conversion, '77 had a seven point lead, 28-21. '09 went 3 and out, and '77 looked like they were marching towards a game clinching score, but their 12 play, 7 minute drive ended up with zero points as Fred Cox's 42 yard field goal went wide right.

Suddenly, it was deja vu for '09 all over again: just over 2:00 to go, and they need a TD to tie and go to OT. Favre struck quickly, hitting TE Visanthe Shiancoe for 57 yards, down to the '77 11 yard line. But after a 3 yard AP run and an incomplete pass, two holding penalties and a false start put '09 in a 3rd and 33 from the 34. Then, something like this happened:

Yeah, Favre to Lewis. 34 yards. Touchdown. Tie game. In overtime, '09 took the opening kickoff, drove down to the '77 25 in 9 plays, and Ryan Longwell kicked the game winner. 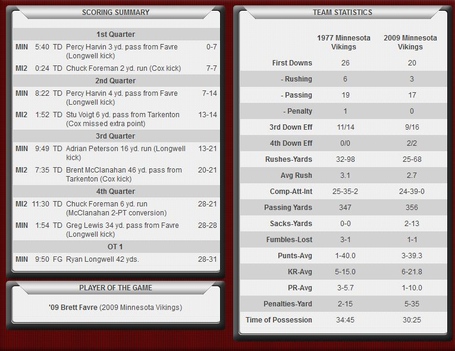 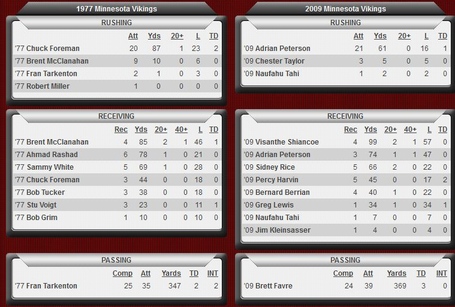 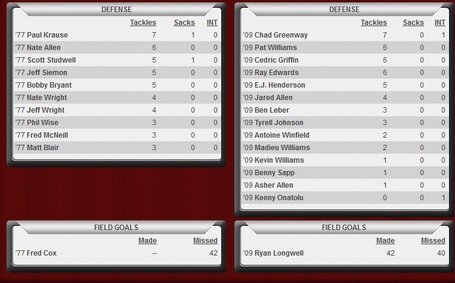 So, our first round ends, and all of the higher seeded teams advance to the quarterfinals. Before the next game, I'll post an updated bracket showing the matchups, but I will tell you our next game will see the #1 overall seed, the 1969 NFL champions, in action against the 1987 team.