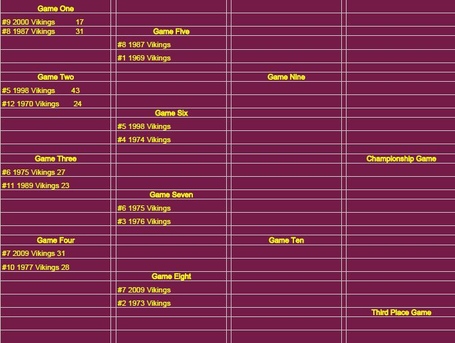 It's time for the quarterfinals in our all time greatest team tournament, and it will mark the appearance of the four Super Bowl teams of the famed Purple People Eaters era. First up is the almost legendary '40 for 60' 1969 NFL Champions, and our #1 overall seed.

This was the first truly great Vikings team, the best in franchise history (depending on who you talk to), and one of the greatest teams in NFL history. Since their inception in 1961, Minnesota had tasted little success, with only two winning seasons, one playoff appearance, and no playoff wins. 1969 was different, though. It was the beginning of one of the best, if unfulfilled runs in NFL history. Names like Carl Eller, Alan Page, Jim Marshall, and Bud Grant would become household names in homes all across the upper Midwest, and they were led by a fiery Native American and CFL refugee Joe Kapp.

Kapp's time in Minnesota was short, but his impact was profound. His leadership was immediate--the Vikes lost their opener to the New York Giants, and for week 2 Grant named Kapp the starter. He threw for over 400 yards, 7 TD passes, and the Vikings rolled the defending NFL champion Colts 52-14. They steamrolled through the NFL, leading the league in scoring, in defense, and the playoffs, until the Super Bowl.

I talked a little bit about them in their round one game, but I really overlooked Anthony Carter and how important he was to that team. 1987 was arguably AC's finest year as a Viking. He had more yards in other years, but remember he missed three games due to the players strike. So when you factor in that he had 922 yards in only 12 games, it becomes that much more impressive. He averaged...averaged...24.3 yards per catch that season, and the non-strike Vikings only had 2,500 yards passing between an aging Tommy Kramer and an average Wade Wilson. AC had the ability to take over games, and the San Francisco playoff game was his coming out party to the NFL. '87 was the first of three straight Pro Bowls, and he was on his way to becoming one of the best receivers in team history.

Um, no. It was close for a half. '69 even fell behind midway through the second quarter when Darrin Nelson went over from 3 yards out. '69 took control in the third quarter on TD runs by Dave Osborn and Bill Brown. At 31-14 it seemed that the game was over, but '87 rallied.

Two Wade Wilson TD passes (James Brim and Anthony Carter) got '87 within 3 points, but Joe Kapp took '69 on a 7 play, 72 yard drive, which ended when Bill Brown took a pitch left and went 7 yards for the game winning score. 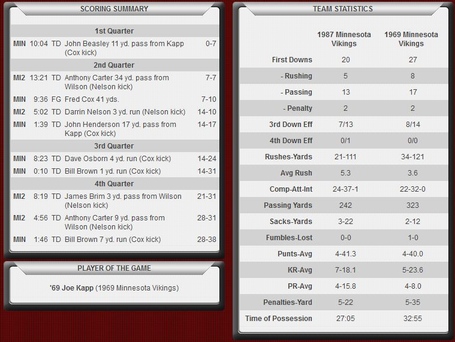 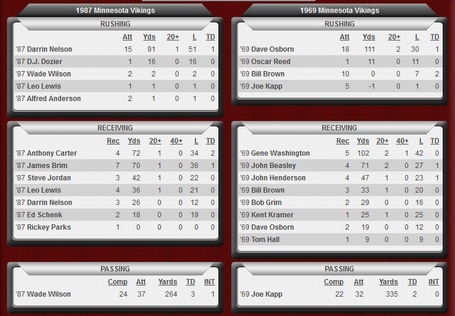 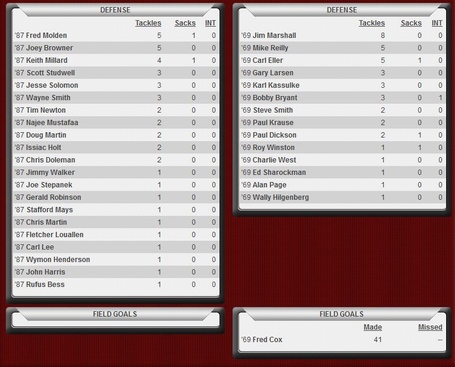 And really, does anyone--anyone--remember James Brim? He was a Viking for one year, but ever since I started messing around with this sim, I've played the 1987 team several times, and he always tears it up. Weird.