We roll on with our all time tournament, and this game is, at least for me, kind of a dream match up: Three Deep vs. a Purple People Eaters Super Bowl team. While Randy Moss and company eviscerated a very good 1970 team, can they keep it up against what was a Super Bowl team?

In 1998 Randy Moss destroyed everyone, but saved his best against Dallas

1998. For me, 1975 will be my All Time Kicked In The Nuts team, but '98 is a close second. But man, that was one hell of a team. When you look back at that roster, the thing that strikes me is that there was so much depth on that team on offense, and on defense, about four or five guys all had great if not career years (Ed McDaniel, Jimmy Hitchcock, Dwayne Rudd, John Randle). And there are as many current or future Hall of Famers on that roster than there are on the famed 1970's teams (Randall McDaniel, John Randle, Moss, CC v. Eller, Page, Tarkenton, Krause, Grant).

This was the Purple People Eaters at their best...great time to be a Vikes fan

I remember the 1973 season in bits and pieces, like the NFC Championship and the Super Bowl, and a few plays from a few games. I was a fan, but I was also a little kid. Look, I had Tonka trucks, what do you want from me? It was 1974 that I really remember sitting and watching games every week, and making time to do so. And although the '74 edition wasn't quite as good as '73, the Steelers presented the best opportunity to win a Super Bowl of the three played in the 1970's. The strength of Miami played into the Vikes weaknesses, and the Raiders in '76 were just a better team. In '74, Terry Bradshaw was a below average passer, Franco Harris was good but not great, and I really thought the Vikes offense matched up well with the Steelers defense. But the offense couldn't get anything going, and Franco Harris decided to run wild. Damn.

Can '74 slow down Randall Cunningham and 'Three Deep'? Let's find out!

They were able to slow them down, but not enough to come away with a victory. This was a game that looked like '98 was going to run away with, much like they did in their first round game against the 1970 team. '98 opened the scoring with a 12 yard TD pass to Randy Moss, and late in the third quarter it looked like it was over when Robert Smith went in from 2 yards out, and '98 took a commanding 17-3 lead.

But as '98 seemed to be driving for the clincher in the fourth, CB Nate Wright stepped in front of a Randall Cunningham pass and went 71 yards for the TD, and momentum changed drastically. '98 went 3 and out, and '74 went 63 yards in 12 plays, culminated by short John Gilliam TD pass.

'98 got the ball with 3:30 to go, and they were able to get 2 first downs and kill the clock, preserving a razor thin victory. Your game stats: 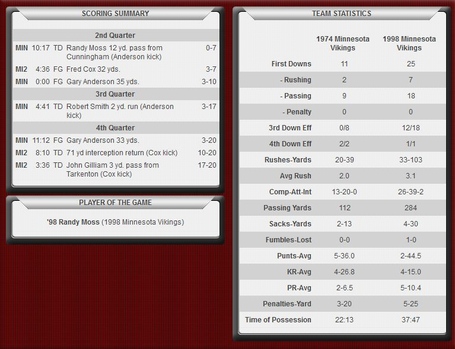 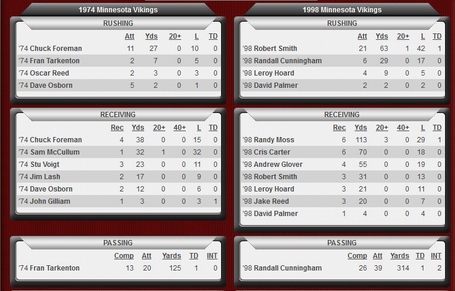 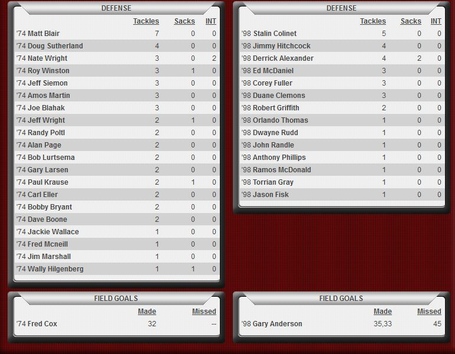 So '98 survives another Purple People Eater team, and they will now meet the 1969 team in the semi-finals. But our next game will pit the '75 Vikings against the '76 Vikings. That should be easy to follow.