Understanding the Vikings: The Tampa-2 and its Front Seven

Share All sharing options for: Understanding the Vikings: The Tampa-2 and its Front Seven

The Minnesota Vikings are well known for having a historically powerful defense. From their inception in 1961, the Vikings have had a top 5 defense for 11 of its 50+ years, and have ranked first in points allowed 6 times. Having switched from a four man front only once, the Vikings have consistently built their defenses around a penetrating line. The most recent iteration of its defense, the vaunted Tampa-2 that won Jon Gruden a Super Bowl in 2003, has been the subject of discussion among fans and commentators alike. It carries with it a set of responsibilities that give each player in the system a set of unique duties.

Because discussions about the Vikings defense often get bogged down into specifics and commentators will often refer to the Vikings Tampa-2, it's critical that fans understand the system and thought process behind the Tampa-2 defense, and how the Vikings in particular run it.

Before diving into the gap assignments and responsibilities of undertackles and the left defensive end, it's most important to lay down the foundation for describing defensive lineman and their various jobs across systems.

In order to understand the nomenclature used to describe defensive lineman, take a look at the chart I've created below—the techniques are at the top, and the gap assignments are at the bottom. The Y refers to the Tight End and the offensive lineman lined out of alignment is the center.

The technique system may seem extremely nonintuitive at first glance; they don't follow a numeric order as they move out, and the letter "i" (denoting an "inside" shade) is applied inconsistently. Why would it go 5, 7, 6, 9, 8? There are a few rules that actually go a long way to helping understand the system.

When Bear Bryant reportedly standardized the system at Texas A&M, the goal was to create a terminology that not only easily defined alignment, but also function. Anyone given an even number technique had two gaps to control, and they were lined up over an offensive lineman. 0 over the center, 2 the guard, 4 the tackle, and 6 the end. By extension, the 8 is outside the tight end, and not shaded over a player ("nose over air"). The odd numbered techniques were designated by taking the lineman corresponding to one number below, and lining up on the shoulder closest to the C gap. They generally attacked one gap.*

As an example, a 3-technique DT would line up on the outside shoulder of the guard (the 2, in this scheme) and would therefore attack the B gap, while a 7 technique would shade inside the tight end (6), attacking the C gap. The odd numbers will tell you how and where you should attack your gap, and also where your assignment is relative to the C gap.

Given the frequency of off-tackle runs, it made some degree of sense to prioritize technique and gap control in relation to the off-tackle gap, where running backs were gashing Bear Bryant's defense (to the tune of 157 points in 10 games, while only scoring 97). In fact, there seems to be some implied hatred of the C gap in his original playbook, where the line assignments around those gaps seem particularly antsy:

As you can tell, the 4i and 2i techniques were created later, although they are still not referred to often. Mean Joe Greene would sometimes line up as a 2i to take advantage of the confusion he caused, although no one called him a "2i-technique tackle."

In a 4-3 system, there are two basic defensive line setups - the "over" and the "under." The "under" alignment was used by Tampa Bay and designed to emphasize Warren Sapp's ability to get to the quarterback. "Under" alignments are distinguished by the fact that they will line up their defensive tackles in a position away from the "strong" or "closed" side, which is generally the side with the tight end (or in some sets, the slot receiver). Both ends will line up in a true 5-technique, with the strong side end between the tight end and the tackle, although this is perhaps the most fluid assignment - many strongside defensive ends will line up nosed over the tight end (6-technique) or on the outside shoulder (9-technique). Generally speaking, both ends will be responsible for the C gap, while the 3-technique tackle (also called undertackle, or UT) will attack the B-gap of the weak side. The 1-technique tackle (called the nose tackle, or NT) will attack the A-gap of the strong side. The strong side linebacker ("Sam") will cover the "D" gap created between the tight end and the sideline, while the weakside ("Will") linebacker covers the weak-side A gap and the middle ("Mike") linebacker will cover the strong side B-gap.

There are some variations of the under, including the one found in Madden playbooks, that has the Sam linebacker lined up at the line of scrimmage - this reduces the time it takes to fill the gaps, and looks much like a 5-2. Both variations are below. 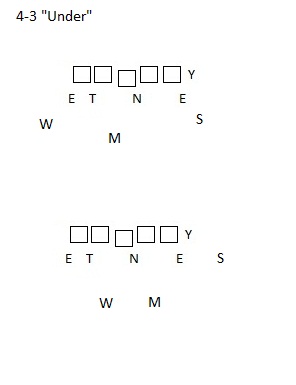 An "over," naturally, is the opposite - the defensive tackles will line up over the strong side (closed by a tight end or slot receiver). The gap assignments are unsurprising and consistent with the principles above: 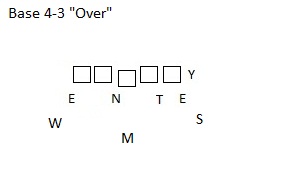 Both ends are lined up in 5-technique, the nose is on the weak side A-gap (a 1-technique), and the under tackle is inside the strong side B-gap (3-technique). The Mike will control the strong side A, while the Will generally controls the weakside B-gap. The Sam will cover the D-gap created by the tight end.

In the typical 4-3 alignment, all four players will shoot through the gaps in order to make plays in the backfield, with the linebackers minding the gaps not attacked by the linemen. In running plays, the center and weakside guard will attempt to double-team the nose tackle, but will often need a player (generally the guard) to move from the double team and make a second level block on the Will or Mike linebacker. If the play runs to the weak side, the strongside end might go unblocked while a guard pulls in order to act as a lead blocker for the running back, and they'll generally take out the Will while the center will attempt to make a play on the Mike. Regardless, the 4-3 one-gap system gives a lot of run responsibility to the linebackers, and frees up the line to disrupt the pass. In my opinion, it is particularly vulnerable to zone-read running.

Because the nose tackle is usually extremely powerful and quick in their north-south movements (unlike nose tackles in a 3-4 system, who are not required to be penetrators, but are generally laterally agile), they'll also usually command a double team, which will free up the Mike or the Will linebacker to make the play in the run game. The nose tackle will need to consistently demand that double team in order to make the Tampa-2 effective. This is how the over alignment of the Tampa system deals with the problems of zone-read running endemic to traditional one-gap 4-3 systems, and why Pat Williams was a more important part of our defense than many commentators gave him credit for.

The weakside defensive end is also asked to read the play and will get into contain much more often, instead of indiscriminately attacking the C gap. This means that the defensive end on the weak side is tasked with containing outside runs while the Will linebacker will contain off-tackle and off-guard runs when the weakside end goes wide to direct traffic. The Tampa-2 system in general, and the one employed by the Vikings in particular, is designed to direct running traffic to the Will linebacker, which demands that the Will be a strong tackler more than anything else.

The 3-technique has the easiest job. He attacks the gap and gets to the ballcarrier. This is not different from the normal 4-3 system. This is usually your most athletic defensive tackle and will take advantage of the double team created by your nose tackle.

The personnel developed in these systems are generally much better equipped to drop into coverage as well, given the number of adjustments that individual linemen will often make to the play. Here's a diagram outlining the defensive line in the Vikings base defense. 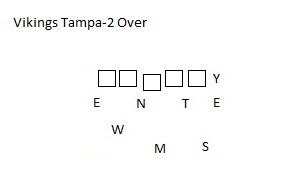 If you want to see an example of this, I've screenshotted two plays from two perspectives for you as well: 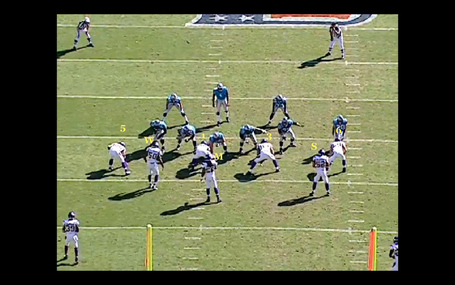 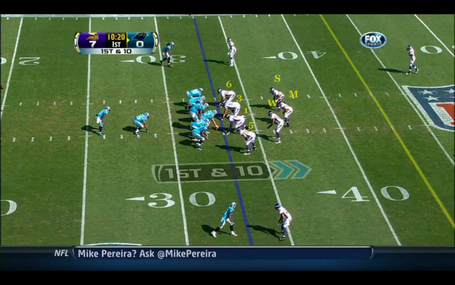 I've already to some extend described the responsibilities of the linebackers, but they'll be more important when I put together a "Back Seven" article. For right now, just know that the linebackers will cover any of the gaps that aren't covered by the defensive line. They have greater responsibilities in the run, generally, than linebackers in a 3-4 system, largely because of the one-gap nature of the 4-3. The Sam will either take the D gap or the C gap depending on the 6-technique's read on the tight end (and will take the D gap if there's no tight end, but just a slot receiver), the Mike is responsible for the strongside A gap, and the Will has the responsibility of reading the flow of the play and finding the tackler, so his gap assignment is not that important (but will generally be responsible for the weakside B, especially given that the weakside end will funnel the runner towards the Will by taking both the C and D gaps).

You'll usually find the Sam linebacker taking the lead blocker (the pulling guard or fullback) while the Will and the Mike will make the play.

Hopefully, this will help us move the discussion forward and allow us to more accurately assess our needs as a team and what capabilities we should expect from our players.

* This was not always true, and is certainly not true today, as many "5-technique" defensive ends in 3-4 systems will be responsible for both the B and C gaps, and many of them will line up in 4-technique despite the name.

This article is by no means exhaustive, and only describes the base set. If you've found inaccuracies in the system described above, the nomenclature used, or what you've found in personnel alignments for teams you know that run the Tampa-2 (including the Vikings), feel free to comment, and I'll update the article to reflect that new information.

Big thanks to Trojan Football Analysis, Scardraft, Smart Football, and Windy City Gridiron (describing a different Tampa-2), all for unknowingly providing me with supplemental and relevant information.