We are halfway through our quarterfinal round, and we have an entertaining, if not confusing, match up for you today: two teams that are essentially mirror images of each other, the 1975 Vikings vs. the 1976 Vikings.

This game was a complete domination. Pay attention at the 1:40 mark to hear just how much.

I profiled the '75 team in their opening round game, and as much as I love that team, it's truly difficult for me to write or talk about them without getting homicidally angry. Great team, an all time great team, robbed of destiny by a terrible, terrible, horrible moment in time. It's been over 35 years, and I still refuse to watch that play. I know I joke around a lot, but I'm 100% serious on this: If I ever met Drew Pearson and he stuck out his hand to shake mine, I'd tell him to eat a bag of rotten boogers. He might be the nicest guy in the history of the world, but I will never...EVER...have a positive thing to say about him. Is that irrational? You bet it is. Do I care that it's irrational? No, I don't. it's sports.

As stunning as 1975 ended, the '76 Vikings were able to shake it off and steamroll through the regular season and playoffs. The Purple People Eaters were still dominant and the offense, with Chuck Foreman, Fran Tarkenton, and exciting rookie WR Sammy White (by the by, I LOVED Sammy White) were still able to score in bunches. But this team, probably more so than the the other versions of the Purple People Eaters, had an almost uncanny knack for blocking kicks--14 of them total. In the NFC Championship, Nate Allen blocked an L.A. Rams FG attempt, Bobby Bryant scooped it up and went 90 yards for the TD, and another Super Bowl ticket was punched. In the Super Bowl, the Vikes blocked a Ray Guy punt early in the first quarter, and were set up first and goal inside the Raiders 5. For some inexplicable, ungodly reason, the Vikes gave the ball to Brent McClanahan and not Chuck Foreman. McClanahan fumbled, the Raiders recovered, my Dad let out a stream of expletives that would have made the Dad from A Christmas Story proud and proceeded to get hammered, and the 'here we go again' feeling came over us like the plague. It was over.

Let's try and figure out this boxscore, after the jump.

This game was closer than the final score indicated, as '75 lead well into the fourth quarter. It's funny, but these teams were very similar, no surprise. Both teams had a safety, both teams went for it on fourth down at the opponent 35 and didn't convert, and both blocked a kick or extra point. '75 Tark was 21 of 37, '76 Tark was 21 of 35. The difference was the 1976 version of Chuck Foreman, who rumbled for 160 yards, and 1976 rookie Sammy White, who had 90 yards receiving. 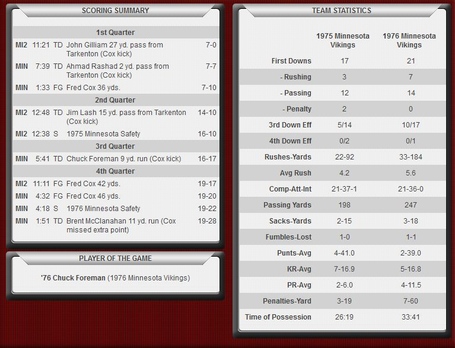 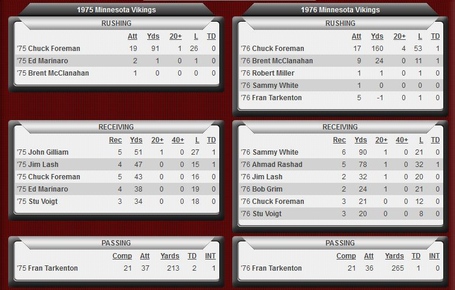 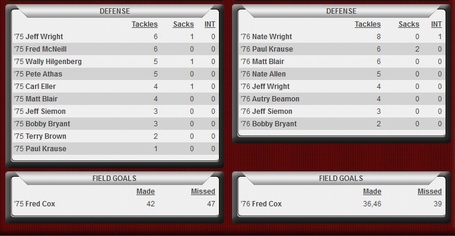 So as we move on to our last game of the quarterfinals (2009 v 1973) we've only had one upset, but it's tough to say that the '98 Vikings winning would be an upset. And if the '09 Vikes can pull an upset, our semifinals would really stretch across franchise history, as we'll have a team from the 60's, 70's, 90's and the 00's. Personally, I think that's kinda cool, but we'll have to see how it all turns out in our next game.

Which will be tomorrow!