After this game, we'll have our final 4. And regardless of who wins this game, it's going to be an impressive quartet. And it will be interesting to see how this game ends, because it's arguably the Vikings second best offense ever against arguably one of the top three defenses in franchise history.

This was my favorite game of 2009, even over the Green Bay games.

I talked about the 2009 squad in depth in their first round game, but I want to add just a couple things. For one, Adrian Peterson is just the type of back that gave the 1973/Purple People Eaters era Vikings fits. When teams beat the Vikings back then, they did it by running right at them, generally in the direction of Alan Page. And Rookie of the Year Percy Harvin could cause a serious mismatch with the '73 secondary, because after Nate Wright and Bobby Bryant, depth was an issue.

As we remember, 2009 was the year we realized that the Vikes offensive line was sub par, and had the Vikes had any other QB other than Favre, the results wouldn't have been nearly as good as they were. He was able to avoid the rush and get rid of the ball in a way that maybe two or three other QB's in the NFL were/are able to do, and none of those other guys were on the Vikes. When this team lost, it was because the offensive line failed, and they had issues with speed rushers all year (Julius Peppers says hi, Bryant).

And the Purple People Eaters know a thing or two about putting pressure on the quarterback.

The Purple People Eaters at the height of their power, on both sides of the ball

In my opinion, this was the second best team in franchise history, but you could make an argument for the '98 team. They had undergone a lot of transition since their NFL championship season of 1969, and the most notable ones were on offense. Gone were Joe Kapp and his heir apparents, and Fran Tarkenton returned as a conquering hero after exile in New York for five years. The Vikings also drafted multi talented RB Chuck Foreman out of little known Miami, FL (no, really, they were AWFUL back then), and the Vikes had the missing links on offense needed to get back to the Super Bowl. Tarkenton continued his assault on the NFL record books, Foreman gave the Vikes a Rookie of the Year performance and a multi-faceted weapon at the running back position no one had ever seen.

On defense, the Purple People Eaters were largely the same, with the exception of new faces at linebacker and one or two in the secondary. Eller, Page, Larson, and Marshall were still the best defensive line in the league, and the Vikings rolled out to a 9-0 start while running away with the NFC Central. In the playoffs, they absolutely curbstomped the Cowboys in the NFC Championship, and it seemed like they were poised to steamroll through the Dolphins in the Super Bowl. I can't remember how that turned out.

Wow, this was a blowout, something I really wasn't expecting. '09 really took hold of the lead, and although '73 got close, they mever really seriously challenged '09 at all. Like I feared for '73, utilizing a strong running back and running right at the teeth of the defense paid off, as Adrian Peterson rumbled for 142 yards. Brett Favre also had a great game, passing for over 300 yards, and when '73 got close late in the second quarter, Visanthe Shiancoe came up with a big play he was known for, scoring on a 72 yard pass, and that essentially put the game out of reach. 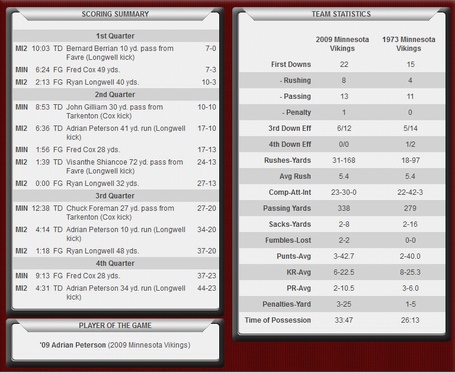 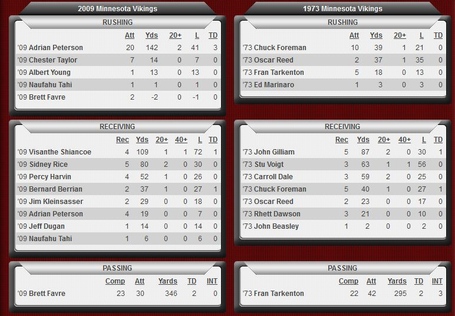 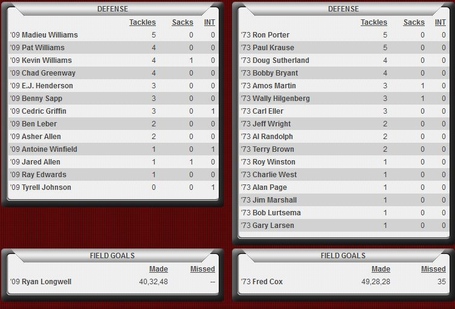 First semifinal game will be either tomorrow or after the weekend.