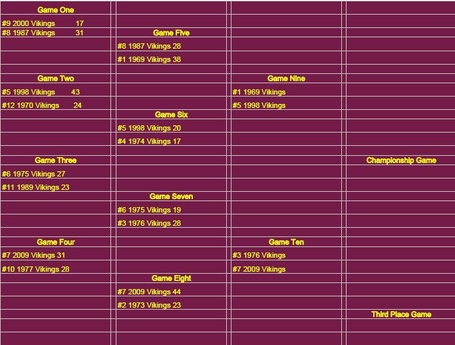 We've come down to our All Time Final Four, and the first game pits what many people think are the two best teams in franchise history--1969 v 1998. Most of our readership is partial to 1998, and that's understandable--they are a recent team that most of us were able to follow, and we saw it all unfold every Sunday. And if you were born after that, and you're too young to remember the '98 team, I just want to go on record as saying I hate you for making me feel so old.

I've said my peace about '98 here and here, so there really isn't much more to say. Wait, yes there is. We've barely talked about the season Randall Cunningham and Robert Smith had. I thought Cunningham's moment in the sun as a Viking was his improbable playoff victory against the Giants in 1997. He seemed old, washed up, and on his way out of the NFL, but in 1998 he just blew up, putting up MVP-type numbers while quaterbacking the most explosive offense in league history to that point.. Robert Smith, who was finally healthy for the second straight season, was on his way to eclipsing Chuck Foreman as the Vikes all time rusher--strong, fast, and was a home run threat from anywhere on the field.

This was Joe Kapp's record setting game against the defending NFL Champs--Make sure you watch all three segments; this is just the first one

Back before my Dad's memory started to slip, he insisted '69 was the best team the franchise ever fielded. When I mentioned '98, he would scoff and say "offense is fun to watch, but defense wins games son". And the 1969 defense was suffocatingly good. It all started up front with the Eller, Page, Larson, and Marshall, but guys like LB Lonnie Warwick and Wally Hilgenberg were quality players, and they had a ball hawking secondary that seemingly turned every errant throw into an interception. That, and in my Dad's world "Bud Grant could outcoach that idiot Denny Green 7 times out of 5."

This is probably the most anticipated game of the tournament to this point, so let's get to it!

'98 advances, but it took them overtime to do it. This was kind of a snoozer of game, as it was relatively low scoring, and through 3 quarter '98 had firm control of the game. They jumped on '69 early in the first quarter, and scoring on their first two drives. On the first drive, Lonnie Warwick sacked Cunningham, but on the next play Cunningham hooked up with Randy Moss for a 44 yard gain. The Vikes ran the ball effectively, but the drive stalled and Gary Anderson hit from 37 yards out. After forcing a '69 punt, Cunningham used intermediate passes and drove right back down the field, which culminated in 1 13 yard TD pass to Randy Moss.

The second quarter saw the '69 defense regroup and shut down '98. On the one drive they did manage to sustain, it ended with an interception by Earsell Mackbee on the '69 10 yard line. The '69 offense got somewhat untracked, but couldn't get the ball across the end zone, and had to settle for two Fred Cox field goals.

The third quarter was a punt fest, as both defenses stiffened. But as we got late into the third, '98 mounted another drive, and Cunningham, mixing intermediate passes and short runs to Robert Smith, engineered another TD drive, hitting Robert Smith from 12 yards out. With the way Joe Kapp was overthrowing his receivers, and the way '98 had completely shut down the '69 running game to this point, it looked like the clincher.

But there's a reason the '69 team was so good. They took the ensuing kickoff and began their comeback. Running lanes started to open, Kapp's dying quails began to fall into the hands of their receivers, and '69 went 71 yards in 12 plays, using 7 minutes of game time. Dave Osborn went in from two yards out, and Bud Grant decided to go for two. The gamble failed, but we had a new ball game at 17-12.

But '98 answered that touchdown with a 34 yard Gary Anderson field goal, and with just over 6 minutes to go, '98 went up 20-12. Joe Kapp took the field and started what looked to be an epic, game tying drive. Starting at their own 38, the drive got to midfield, but things turned bleak. Facing a 4th and 9 from the '98 46, Kapp hit John Henderson for 13 yards and a critical first down. A touchdown seemed like a foregone conclusion. As the 2:00 warning came, '69 was on the '98 23. Joe Kapp threw a quick out to Tom Hall, who was immediately hit by Ed McDaniel. Hall fumbled, Dwayne Rudd recovered, and celebrated in a manner that Dwayne Rudd only could.

'69 took over on their own 26, no timeouts, and just :35 seconds on the clock. Kapp was able to get a quick completion to Dave Osborn for 4 yards, and then a long one to Bob Grim for 28 yards, both out of bounds. I imagine the radio call on the next play would go something like this, with the voice of Ray Scott and the emotion of Paul Allen, all rolled into one:

Six seconds left, ball on '98 42. It all comes down to this one play. Kapp comes to the line. Dave Osborn is offset right, and '69 is in a trips left formation with Henderson, on the outside, Grim in the middle, and Gene Washington on the inside. Kapp takes the snap, drops back, '98 has 8 men in coverage. Kapp, plenty of time, looks downfield for a receiver, lets it go....AND THE BALL IS CAUGHT...CAUGHT BY JOHN HENDERSON IN THE END ZONE FOR A TOUCHDOWN! OH...MY...HEAVENS!

The '69 bench goes wild, and Bud Grant even manages a smile. '98 looks stunned, and Denny is going to be crucified, ironically, for not taking a knee. The two point conversion is a given, as Dave Osborn walks in past a stunned 1998 defense. Tie ball game.

But in overtime, neither offense could get anything going, and the teams exchanged two punts. On their third possession, '98 decided to run right at the teeth of the '69 defense, with Robert Smith and Leroy Hoard carrying 7 times on an 8 play touchdown drive. A gassed '69 defense couldn't stop them, and Robert Smith went in from 4 yards out for the game winner.

'98 survives, but barely. What a great game those teams would put on, had we an opportunity to see it in real life. 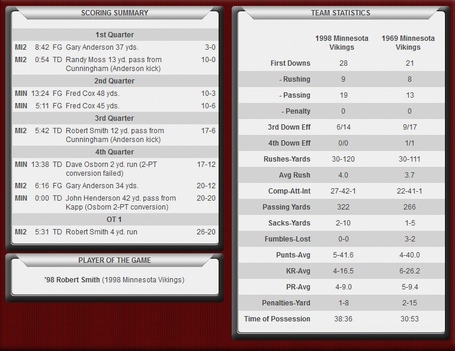 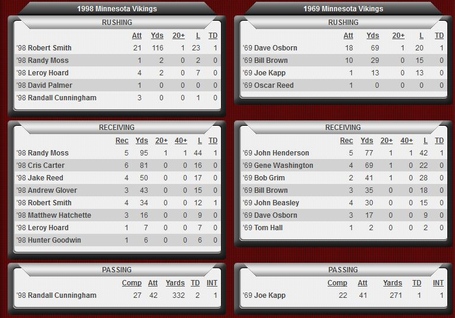 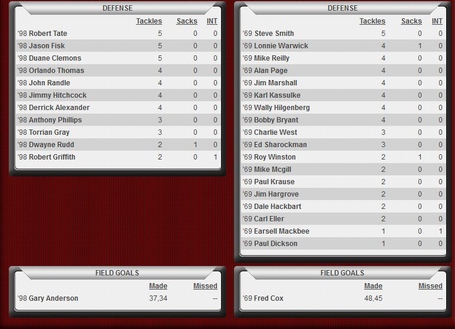