We are down to our final two games, and much like the college BCS, this is the bowl game that no one really cares about, because it's not the title game.

But it's still a good game.

1969 was the Age of Aquarius, Vietnam, Height-Ashbury, and the Purple People Eaters. My Dad loves this team, and for his generation, it's pretty much their 1998 team. It's funny, but he doesn't look back on the Super Bowl loss as a big deal. Even with the merger, the Super Bowl was still considered a glorified exhibition, and most NFL fans outside of Kansas City thought the Vikes just had a bad game. Of course, that narrative would change by 1976. By the mid 1970's the Super Bowl had become THE major American Sporting Event, and a fourth loss by the 1976 team defined the Purple People Eater era as a 'yeah, but...' period of time in Vikings history. So the two bookend teams of that era meet to determine who wins the Van Brocklin Bowl.

Let's get to it! Oh, a quick note: I'm playing this game at Met Stadium. For no other reason than a) I can, and b) it seems the right thing to do. Both these teams played there, so no one gets a leg up or advantage.

So our third best Vikes team of all time, at least in this little exercise, is the first Super Bowl team. My Dad disagrees and thinks that all things being equal, '69 would 'kick the hell out of anybody'. 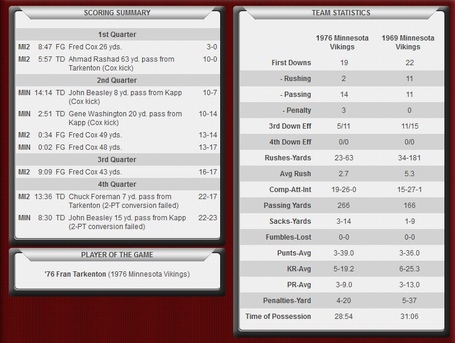 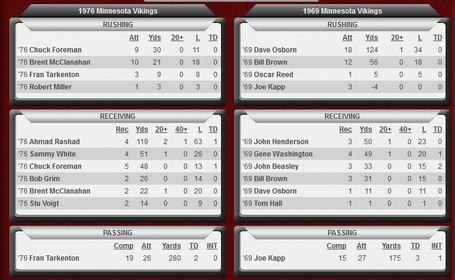 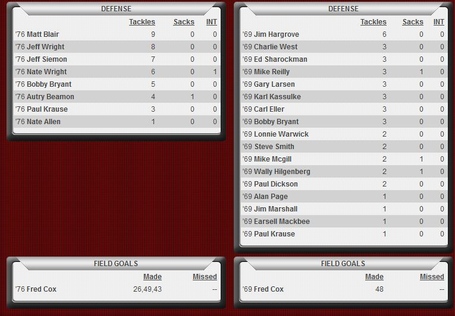