This is it. We started our tournament a few weeks back, and we are now at our championship game--The 1998 Point A Minute Flying Denny's vs. the 2009 Eff Yous.

We've talked about all of these teams, and it's been a great walk down memory lane for me. Finding some of those clips on YouTube really took me back to my childhood, and going to games at the Met with my Dad. Seeing those guys come back to life on screen really brought a flood of memory and emotion for me, as I recalled where I was in life as each team was covered and each game was played.

And I'll admit, I'm pulling for 2009 here, as this team really brought my Vikings fandom full circle for me and my father. I grew up with the Purple People Eaters, and he took me to my first games at the old Met. In 2009, we both felt that 2009 team was going to go on a serious run, and we were able to see them live in St. Louis. It was very poignant for me to be able to take him to see the game, after all he had done for me.

But I also know most of you feel about 1998 the way I feel about 2009, and they are the sentimental, and logical, favorite in this game. If the 2009 defense had an Achilles heel it was the secondary, and 1998 had the most potent offense in league history. If Jared Allen and company can pressure Randall Cunningham, they might prevent this game from becoming a shoot out, but if Denny gets his shoot out, he'll win it.

So, without any further delay, may I present the Valhalla Bowl results!

I always thought the team to emerge from this tournament would either be the 1969 team, or the 1998 one. When '98 beat '69 earlier, I figured this was all academic, and it was.

'09 jumped out to an early lead when Brett Favre connected with Percy Harvin, but as they did so often, '98 got a head of steam and spent the next two and a half quarters rolling over '09. The '09 secondary was absolutely torched by Randall Cunningham, and but for a Chad Greenway interception in his own end zone, '98 would have been up 28-7 at halftime.

But the interception gave '09 life. After holding '98 to a field goal to open the second half, Brett Favre orchestrated another one of his many comebacks, and after Adrian Peterson went over from the 10, it was 24-21 with 10 minutes to play. But '98 took charge, going on a game clinching scoring drive, and when Hunter Goodwin hauled in a Cunningham pass with just under 8 minutes left, it was pretty much over. 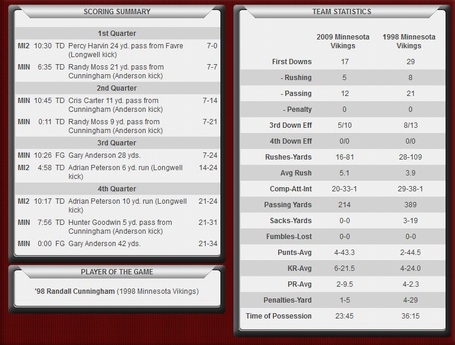 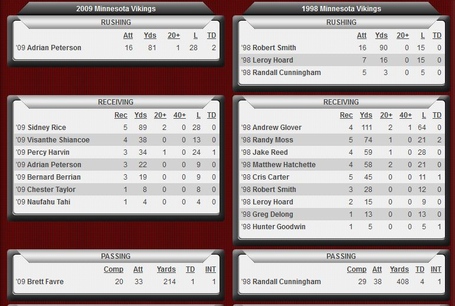 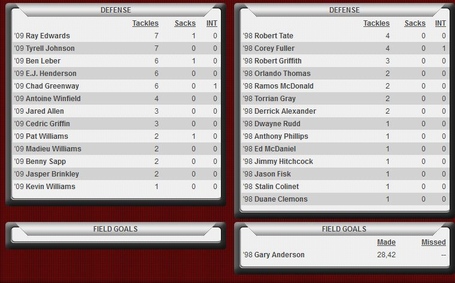 So, as many of you hoped, 1998 emerges as The Daily Norseman's All Time Greatest Vikings team.

And look, no meteor!

Have a good one folks, and I hoped you enjoyed this as much as I did.