Share All sharing options for: The New Stadium Wants College Football, Too 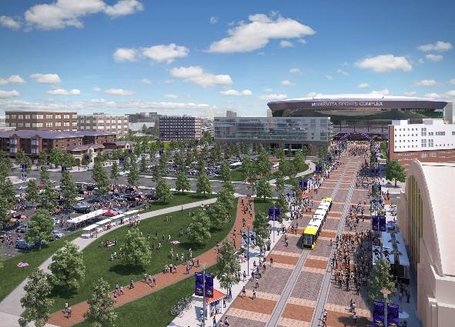 If you look reeeeeeeaaaaaaaaally close, there's a #Wilfare drum beater there somewhere, but he's hard to hear over the awesomeness of the new stadium

The new stadium that's being built in Minneapolis--you know, the one that will keep our beloved Vikes in Minnesota for the next 30 years or so, has in it's sights more than just professional football.

If everything goes according to plan, not only will the new stadium host a Final Four and a Super Bowl, but the folks in charge are also exploring the possibility of hosting the NCAA National Championship.

The Authoritah has contacted the BCS folks and have asked them to take a look at the outline for the new facility to see if it would meet the requirements to host the new NCAA Football playoff championship game. The great thing about this is that the BCS will have their report back to the good folks in Minnesota prior to the Authoritah accepting bids from architectural firms.

The great thing about that is that if there's anything about the general plan of the stadium that doesn't meet the requirements to host said game, it can be fixed and given to the architectural firm that eventually wins the job. That way, the stadium can not only host a Super Bowl, but a Final Four, an NCAA football championship, and hey, what the heck, how about the B1G football championship as well.

If the new stadium does host all of that, I'm pretty sure it would be the only stadium to host both an NCAA basketball and football championship. Unless Jerry World beats us to it.