Former manager of the Minnesota Vikings, Mike Lynn, has passed away. Lynn,was best known for the trade that shall not be mentioned, but for the purpose of this article, we will (so we can all beat our heads against the refrigerator). Lynn was 76 and said to be in failing health. 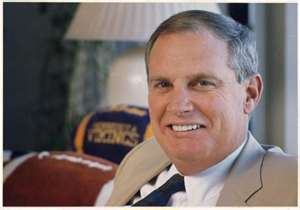 OK, here's what the trade looked like: Minnesota Vikings received

Lynn also obtained a very nice deal for himself, negotiating a 10% luxury suite revenue for every event held in the Metrodome starting in 1982. That deal continues today until the Humpty Dumpty Dome is torn down. Brian Murphy of the St. Paul Pioneer Press reports the contract has paid Lynn between $14 million and $20 million since the deal was put into place.

Statement from the Vikings: "The Vikings are deeply saddened by the passing of Mike Lynn. He was instrumental in the success of the Vikings for many years. Our thoughts and prayers go out to the Lynn family in this difficult time."

RIP Mr. Lynn. And of the Herschel trade, we shall not speak of this again. This team looks to be on the upswing.