Break It Down: Christian Ponder's First Pass as a Starter

Share All sharing options for: Break It Down: Christian Ponder's First Pass as a Starter

This will be the first play break down in a series of breakdowns I'm planning to do over the course of the season. What better place to start than the very first pass Christian Ponder through as the starter for the Minnesota Vikings? Thrown to the wolves against the best team that the NFL had to offer—and our most hated rivals, to boot—Ponder had a lot of pressure on his shoulders.

He responded to the pressure beautifully, throwing a 72 yard touchdown pass completion to Michael Jenkins off of play action on the first play. Join me below the jump to see how this play worked, and why it was so effective.

The play-action bootleg is a favorite of athletic quarterbacks, allowing the quarterback to move out of the pocket into space.

Designed to confuse defenses, the bootleg also gives less experienced quarterbacks a safety valve, insofar as passes outside of the tackle box cannot be called for intentional grounding. The primary action of the bootleg is the play-action, faking a handoff to the running back in order to move the defense out of coverage. In doing so, the quarterback runs with the hidden ball towards a sideline behind the line of scrimmage.

In this specific play, Christian Ponder executes a waggle, or a naked bootleg—one without protection from tight ends, running backs, or pulling lineman. As you'll see below, this helps sell the play action and gives Ponder the time he needs to complete the pass. First, take a look at the play (Queue the video up to 1:27):

There are some other highlights in this video as well, so knock yourself out. There are about 4 other bootlegs, too.

There are a couple of things here that are happening that allowed the play to work, not least of which is the formation and pre-snap movement. After Shiancoe motions from the right side of the formation to the left, it looks like this below: 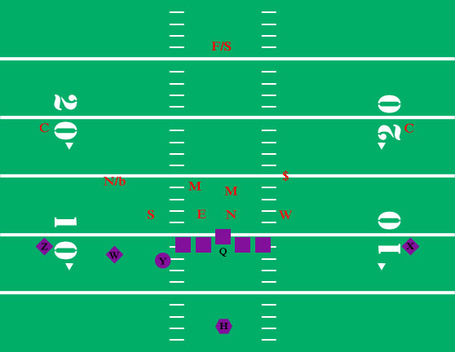 Here, we have a number of conflicting signals, and the Packers took the heaviest cue as their guide. The halfback set eight yards back is the biggest alert for a run, which encouraged inside linebackers Desmond Bishop (lined up over the N) and A.J. Hawk (lined up over the E) to play the run. The strong safety (usually Peprah, but this time it's Burnett who lines up in the box) follows suit.

The only indication that this might be a play-action or a bootleg is the wide split of the receivers. If a receiver had lined up on top of or inside the numbers, it would also be a soft alert for a run as well. As it stands, the Packers read a run (and would have been right most of the time).

Shiancoe's motion to what would have been the backside of the play (the opposite side of the field from where the play is occurring) is not uncommon for Vikings in singleback sets, and the Sam backer (Erik Walden) is now reading him to see if Shiancoe crashes down to Raji (the "End" in this situation), shoots low and forward to take him out of the play, or runs a route.

The free safety (again, usually Burnett, but this time Peprah is playing that role) is reading Charlie Johnson (the uncovered lineman) to see if the play is a pass or a run, but also has the luxury of waiting a second longer to see the play develop before having to make a decision. Burnett should be reading Herrera, but instead (as you'll see) is reading Peterson.

Let's take a look at what defense the Packers checked down to as soon as Shiancoe motioned: 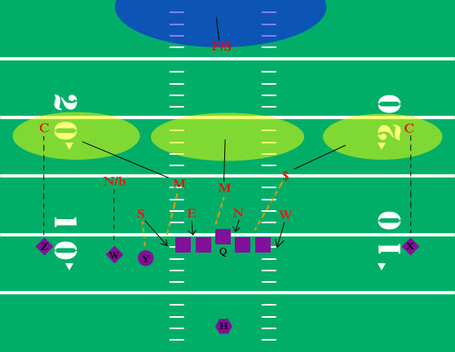 Normally a two-gap 3-4 team, the Packers started in a functional one-gap 4-3 nickel package, where they substituted out one lineman for a nickelback (or rather, a third cornerback—Woodson shifted to nickel and covered the slot receiver). The two outside linebackers, Matthews and Walden, functionally played as standup 4-3 DEs. Had Peterson and Ponder not executed the play action, it looks like the defense would have played out as just a shifted 3-4 with Walden dropping into coverage, but that didn't happen. As they read the play, it was a one-gap 4-3 with the linebackers and safety minding the unaccounted for gaps.

The zone assignments are simply to prevent big plays (as most audibled defenses are). The free safety is in a deep Cover-1 to stop the big gain, and the two linebackers and strong safety are in intermediate zones to prevent the checkdowns from reaching the down marker.

Let's skip forward a few seconds to see how the gap assignments played out: 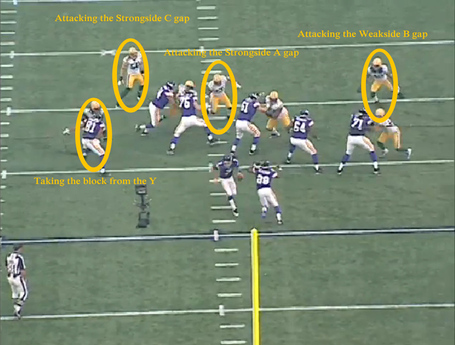 The only one not entirely committed to the run is Hawk, who still bit forward on the first two steps.

The left side of the line blocked "low-hat"—they shot forward and stayed low as if they were run-blocking. They crashed down on Pickett, too. Shiancoe's move inward to seal off the "backside tackler" on the left side sold the run to Walden, as well. All of this signals to the free safety that he should cheat forward for the run instead of staying in his zone for the pass. Charlie Peprah wasn't fooled, but interestingly, Morgan Burnett was.

Berger also sold the run, but Herrera did not. Unfortunately for Burnett, he was reading Peterson to determine the direction of the play and not Herrera, where he would have learned the nature of the play. Loadholt also blocked high, as if in pass protection.

It wasn't a good play-action fake from Ponder and Peterson that sold the play, but rather a series of presnap adjustment and postsnap deception. A quick tally on run alerts: 1) deep backfield, 2) backside TE motions, and 3) a postsnap sell by Hutchinson and Johnson. Throw in the fact that this was Ponder's first start and he had the league's best running back, and the run may have seemed obvious to the Packers.

Peprah may have read some of the other cues, though, which is why he was on a different wavelength than the other 7 Packers in the box—not only were Herrera and Loadholt clearly signalling a pass (and in their defense, it is riskier for them to shoot out and potentially miss the pass block), receivers were lined up snug outside the numbers on the field. More than that, the hot read (Aromashodu, playing as the X in the formation listed above) released hard inside on his slant, something Burnett should have picked up on, too. Speaking of which, let's take a look at the offensive play: 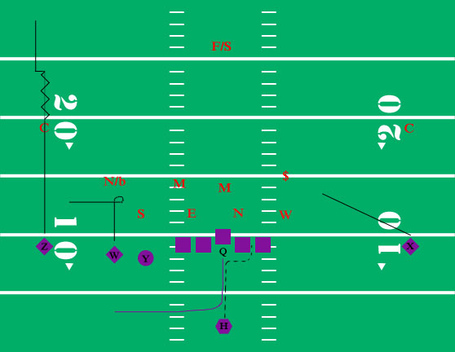 You can see that the X receiver was set up to perform the slant, although this is typically a set-up for a deep post or dig route in the boot (a hard inside release to get just inside the numbers on the field, between the digits, then head straight upfield in the middle of the numbers, breaking in or up at the 12 yard marker). This somewhat atypical route does make Jarrett Bush play off for too long, although that route ends up becoming immaterial. It is still not particularly a surprising route in this situation, given that nearly all boot routes angle towards the bootleg instead of up or away.

The W receiver (Harvin, in the slot) will run a pivot route and will turn in, then out 1-3 yards in (generally three, but in this case and in many others, one). Here the pivot route takes advantage of Percy's ability to cut to create separation from Woodson. More importantly, the route runs in the opposite direction of the boot for half a second, furthering the illusion of the run instead of a play action bootleg. Percy breaks at the same time as the handoff.

The Z receiver (Jenkins) is running a go straight up without releasing in or out at the snap (another minor run alert). At the 12 yard point, he starts chopping to signal a comeback at 15 yards. Nearly every route breaks at the 12-15 yard mark, so this is a major alert for young CBs that the break is genuine. Unfortunately, offenses know this, and can take advantage of it.

The reason that nearly every route breaks at the 12-15 yard mark is to maintain timing on a five step drop, so the quarterback can throw the ball before the receiver breaks to where only the receiver knows it's going to be.

That is not the case in the bootleg.

Jenkins takes advantage of the young Tramon Williams, who is doing what he is coached to do in general situations, and cuts underneath the comeback route in order to intercept a ball he should think is coming. Mind you, Williams made the right call if this were any normal dropback/under center situation. It just wasn't. Also interesting is that Williams has his eyes in the backfield (to catch a run) for most of the play, so he knows that it's not a five-step drop. He just doesn't apply the knowledge through and apply it to his coverage.

He starts the streak, chops back as if running a comeback, and Williams bites hard while Jenkins flies by

This is both excellent play design and execution. All three routes engage in some form of misdirection and you'll see that every wide receiver is open on the play. The play's conception took advantage of habits that every defender learns from their varsity snaps in high school. The only defender seemingly not fooled on this play is Peprah, who backpedals immediately into his zone and breaks to the right as soon as he sees a bootleg—very few quarterbacks can throw across the field in that situation, so Peprah wisely eliminates half the field as a viable passing option.

AJ Hawk doesn't bite as hard as the other linebackers, but he also doesn't backpedal into his zone (something that would have prevented a potential Devin Aromashodu pass if Jenkins wasn't open). At any rate, Aromashodu was not very likely to receive the ball in this situation.

It seemed as if Ponder's reads on the play were not exactly typical top-down looks. His pressure route/hot read was probably Harvin, and his first read would be to Jenkins, then Harvin, then DA. Aromashodu was in the middle of the field, making the throw difficult, even though he was the most likely to be open (throwing at Harvin is also throwing at Woodson).

If you want to see the plays superimposed on eachother, take a gander at this mess: 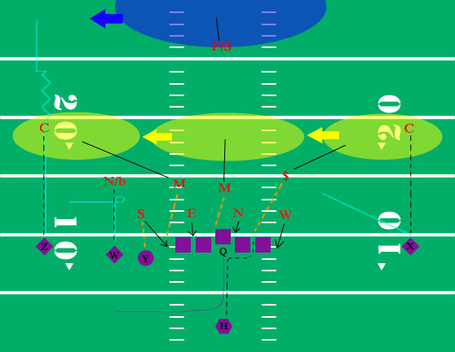 I spent time photoshopping this, so it's going to appear in the damn article, OK? I don't care if it doesn't have a purpose at this point.

AP's play fake and all the man coverage assignments are in black dotted lines, the routes are in light blue, and everything else has already been explained.

The arrows are to indicate that zones shift when bootlegs occur. Hawk and Peprah picked up on this first, and others followed suit. Materially irrelevant because Bishop and Barnett are so out of place on the play so as to be taken out.

There you go. Musgrave designed a play with a number of creative wrinkles designed to take advantage of well-known assumptions and easily referenced presumptions. The play built confidence in the quarterback and the offense while gaining significant yardage. To that end, it provided Vikings fans a preview of what may be to come. Expect a full offense of installed plays that uniquely take advantage of Ponder's talents in this coming year. Maybe Musgrave will give us more real creativity like this, and leave some of the more pointless gadgets in the dustbin.
Only time will tell.