Our second semi-final game once again pits the best quarterback in team history against a future hall of famer that had one of his greatest seasons wearing purple. So far, Brett Favre is 2-0 against Fran Tarkenton, but the 1976 team will be a big hurdle to overcome.

But this is also about running backs. The two best backs in Vikings history also face off, and I want to take a moment to talk about 'my' Adrian Peterson, if you will--the great Chuck Foreman.

By 1976 I was all in as a Vikes fan. During football season, my Dad cut a deal with my Mom. I had to go to the 8:00 church service, but no Sunday School. That got me home in time for the end of Laurel and Hardy, then AWA wrestling, then the NFL Today, with Brent Musburger, Jimmy 'the Greek' Snyder, Irv Cross, and Phyllis George. It's hard to describe how dominant the Vikes were back then--I guess it was kind of like the Patriots now. They were favored every week, they usually won pretty convincingly, and they rarely lost at home, I mean like hardly ever. And in 1976, I never thought the Purple People Eaters would get old, but they were. They were still ridiculously good, but age was starting to catch up a little--all the key players save for Chuck Foreman were in their 30's, and this was their last great team. By this time, Fran Tarkenton held every major passing record in NFL history, and he had a crazy good rookie in Sammy White to throw to.

But for those of you that never got to see Chuck Foreman, you missed a guy that was a Hall of Fame back before he hurt his knee. He had great hands, was a powerful runner between the tackles, but could also outrun defenders when he got to the second level. His main problem was fumbling; if you look at old highlights, he carries the ball like a loaf of bread on the way home from the store. But man, was he good. My brother Brad got to meet him and was his escort while he signed autographs at a Wal Mart in Iowa a few years ago, and he got me an autographed football. It's one of my most prized possessions.

Loved the Monday Night game at home more, but this didn't suck

I know 2009 leaves a bitter taste in a lot of people's mouths, but I'll never feel that way about this team. I've talked about why before, so I won't re-hash it here. But one game aside (okay, maybe a couple--that Carolina and Arizona games were clunkers) this was a roller coaster ride from the moment Brett Favre was followed by helicopter from the airport to Eden Prairie. The two Green Bay games and the Dallas playoff game were high points, but admit it--when Favre hit Greg Lewis to beat San Francisco you Favre haters jumped on the bandwagon, didn't you? Look, it's okay to admit it.

So, who makes it to the finals? Let's Find Out!!

And to my disappointment, none of the Purple People Eater teams can get over the hump and get to the Valhalla Bowl. I guess, in some ways, that's appropriate. But it still kind of bums me out. This was a defensive struggle, as Jared Allen became the first defensive player to be named player of the game. He registered 4 sacks, and absolutely schooled '76 LT Steve Riley.

The first quarter was pretty much '09. Although they were backed up by penalties (12 men in the huddle, no joke) that forced them to start their drive essentially at their own three, they used 9 minutes off the clock and drove all the way to the '76 three, and settled for a field goal.

The second quarter was pretty much all '09 as well. '76 had a sustained drive, but back to back sacks forced a long 47 yard field goal attempt, which Fred Cox pushed wide right. An Albert Young TD run and a Ryan Longwell field goal gave '09 a 13-0 lead, but in reality, it should've been more. '09 completely throttled the '76 running game, and as soon as Fran Tarkenton was able to start a drive, the '09 defense shut it down with a big play, usually a sack by Allen.

The third quarter saw '76 make their comeback, as they took their opening drive and converted it into a 39 yard field goal. '09 made their first critical mistake on the ensuing drive, as Adrian Peterson fumbled, giving the ball back to '76 near midfield. 6 plays later, Tarkenton hit Sammy White from 21 yards out, and it was 13-10 '09 and a new ball game.

'09 nailed another FG at the end of the third quarter, and following a punt by '76, '09 took their first drive of the fourth quarter and went on another long, time consuming drive to essentially put the game out of reach. The 14 play, 79 yard drive took up almost 10 minutes of game time, and by the time '76 got the ball back, there was only 2:30 minutes left. The offense came alive, and went the length of the field, and when Chuck Foreman went over from the 3, they had a chance. They missed the extra point, which could have been huge...if they recovered the onside kick.

They didn't, Favre took a knee, and '09 is on their way to the Championship. Your statisticals (click and thou shall embiggen): 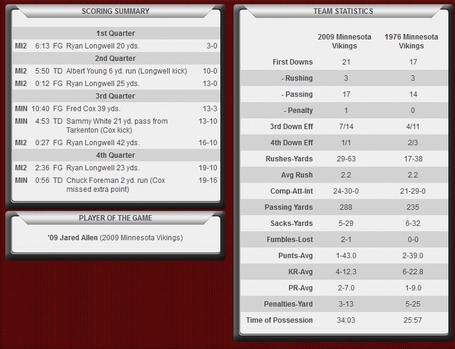 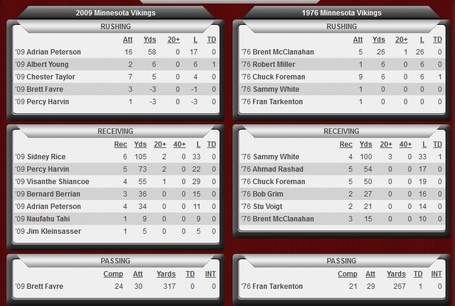 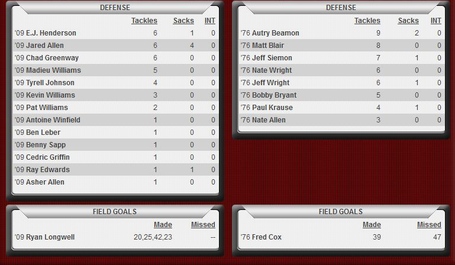