Where We Get To The End Of Our Tournament

Share All sharing options for: Where We Get To The End Of Our Tournament 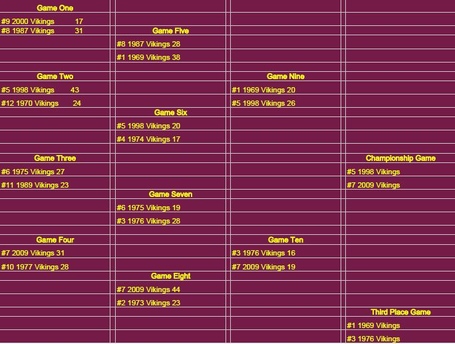 Hey gang. Well, we're down to two games left on our Vikings all time greatest team tournament. It's been a busy few days for me, but we'll finish off the tournament in the next couple of days.

Our third place game is kind of a poignant one for me, as the 1969 Vikings meet the 1976 team. 1969 was the firat Super Bowl team that opened the Purple People Eaters era, and 1976 was the last Super Bowl team that pretty much closed that same era. I'll always wonder a couple of things--what if Joe Kapp had beaten the Chiefs in Super Bowl IV and the Vikings had re-signed him? I think the Vikings win a couple more Super Bowls, the Vikings don't trade for Fran Tarkenton, and the history of the Vikings is a bit different.

Consequently, what if Tarkenton returns and wins just one, or even two Super Bowls? If they do, Tarkenton is in the conversation as the best QB of all time, Jim Marshall, Mick Tingelhoff, Ed White, and arguably Bobby Bryant and/or Nate Wright are in the Hall of Fame, and once again, the Vikings history is demonstrably different.

2009 was a season long 'eff you' season for Brett Favre, and we were the beneficiaries. The beatdowns of Green Bay were season highlights, and the absolute stomping of Dallas in the playoffs was the most satisfying post season win for me as a fan besides the 2004 wild card win in Lambeau. Like all of these teams, the ending was a disappointment, but I was over it within 24 hours. I never expected the Vikes to make it that far, and the fact that Favre had his best individual season while with the Minnesota Vikings gives me some schadenfreudish joy that I'll carry with me to the end of my days.

We'll have the third place game sometime tomorrow, with the Valhalla Bowl a day or two after.