Share All sharing options for: It's Mugshot Monday--Amy Senser Sentenced To Prison 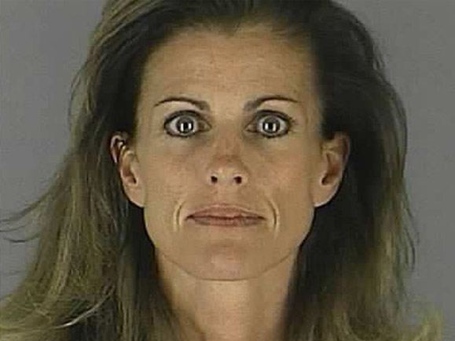 Amy Senser, the wife of former Vikings tight end Joe Senser, has been sentenced to 41 months in prison after her felony criminal vehicular homocide conviction that killed True Thai chef Anousone Phanthavong. She was immediately taken into custody at the conclusion of the hearing. For the month to year conversion impaired, that's 3.5 years in the Big House, and I don't mean Michigan Stadium.

The incident occurred last August 23rd at the Burnsville Riverside exit off of I-94. Phanthoavong was putting gas in to his vehicle when he was hit by Senser, and he died at the scene. Senser maintained she was unaware that she struck anyone and drove home. The incident was reported the next day, and the legal process began.

According to the Twitterverse, Senser must serve at least 2/3 of that term, or 27 months. Again, for the month to year imparied, that's just over 2 years. State sentencing guidelines recommend 41 to 57 months, so the judge obviously went to the lighter end of the sentencing scale for this.

As part of her sentence, Senser must also serve 90 days in a work house, which according to KSTP, will be served concurrently.