Share All sharing options for: Week 2 Preview: The Hyperbolic Chamber

"I think Carly Rae Jepsen is going to be the biggest pop star of our generation."
--Summer 2012

"The 49ers and Ravens are definitely going to meet in the Harbaugh Bowl in New Orleans this year."
--Week 1, 2012 NFL season

"Sure, Tom Hanks was pretty funny in Bachelor Party, but there's no way he's going to be a movie star."
--1984

"Robert Griffin III is definitely going to have a much better career than Andrew Luck. Just look at what he did against the Saints!"
--Week 1, 2012 NFL season

"Nirvana hit it big with 'Smells Like Teen Spirit', but there's no way this grunge thing will catch on."
--1991

"The Jets were just playing possum during the preseason. They obviously have their offense figured out."
--Week 1, 2012 NFL season

Was that a confusing enough introduction for you? Let me explain.

I interspersed the outrageous and incorrect pop culture statements with some of the things that people are actually saying after the first week of NFL games to prove a point: it's pretty silly to judge something based off of only one performance.

Welcome to the Hyperbolic Chamber. After a mere 60 minutes of football, hyperbole and overreaction reign supreme. People immediately feel like they have everything figured out. We make sweeping assumptions about all 32 NFL teams based on an incredibly small sample size. And sure, many of those assumptions from the first week turn out to be correct: the Vikings pissing away a double digit lead against San Diego in their opener last year was a sign of things to come. But on the other hand you might recall the 2003 Patriots. They started that year with a 31-0 drubbing at the hands of the Bills and their season turned out OK.

So with that in mind, let's take a look at the matchup between the Vikings and Colts (along with the rest of the Week 2 NFL slate) without breaking out our Jump to Conclusions Mats.

The Colts opened their season with a 20-point loss in Chicago that included five turnovers and a couple key injuries. It could definitely be a sign of a young team without a lot of depth and talent in certain areas. But the Bears might be really good this year, and nobody expected Indianapolis to have everything figured out right away with so much turnover in their roster. And by "so much", I mean that the Colts played with 30 players that weren't on the team last year. Fourteen of those players were making their NFL debuts.

The Vikings escaped with an overtime win against the Jacksonville Jaguars after overcoming a very sluggish first half. It could definitely be a sign of a young team turning the corner by making big plays when they needed them. But the Jags might not be very good this year, and they were incredibly close to choking away a victory after Cecil Shorts III found the end zone with 20 seconds left.

So what have we learned about the Colts and Vikings? To be honest, not very much at this point. We'll know a lot more after Sunday, and there are a few major items I hope to learn about after watching.

Blaine Gabbert looked surprisingly good last week. He had an inordinate amount of time to throw for the most part, which was pretty alarming considering the Vikings led the league in sacks last year. The pass rush needs to make Luck much more uncomfortable this week. If Brian Robison and Jared Allen can't wreak havoc on Indy's patchwork offensive line, the rookie QB could pick Minnesota's secondary apart.

Speaking of Minnesota's secondary, one word comes to mind: consistency. That word should be flashing in Alan Williams' brain in bright purple neon like the name "Dirk Diggler" popped into Eddie Adams' head in Boogie Nights. Chris Cook had a few solid breakups against Jacksonville but he also got torched on what looked like the game-losing play. (NFL Network's Michael Lombardi called Shorts' catch a "classic back-shoulder nine route", which football buffs will tell you isn't actually a thing. He meant Cook was so out of position that Shorts had time to look back and secure the slightly underthrown ball.) Harrison Smith helped contain Maurice Jones-Drew and the running game but he wasn't around the ball nearly as much when Gabbert took to the air. Austin Collie has been cleared to play and the Colts still have Reggie Wayne--if the secondary is hit-and-miss again, the Vikings might be in trouble.

They also might be in trouble if they start so poorly again. Christian Ponder admitted that he needs to step up his game and execute early. Dwight Freeney has an ankle injury, but I'd be shocked if he wasn't out there on Sunday. He and Robert Mathis are probably drooling over the thought of the Vikings playing catch-up so they can zero in on Ponder play after play. Indy has the personnel to give special teams ace Matt Kalil (hey, he did block a kick last week) and the rest of the offensive line some headaches.

But when it comes down to it, I think the Vikings simply have more talent than the Colts. Leslie Frazier and Bill Musgrave have seemed to figure out that getting the ball to Percy Harvin and Adrian Peterson as much as possible yields positive results. (Duh.) I don't see that changing this week. Minnesota is just about as healthy as a team can be while Indianapolis has been poaching practice squads to help fill out their roster. When you're as young as the Colts and Vikings are, consistency is crucial and the Vikings seem to have more of it at the moment.

Odd fact: the Vikings have never won on the road against the Colts. They're 0-10 all time in Baltimore and Indianapolis. But it's their first game ever at Lucas Oil Field, and I think some new history will be made this time around.

No matter how the game turns out, I can't wait to immediately overreact to it.

Here's the rest of my Week 2 picks (home teams in ALL CAPS):

PACKERS over Bears: Of course I always hope that both teams somehow lose every time Green Bay and Chicago meet. At least I can take solace in the fact that the loser of this game is guaranteed last place in the NFC North thanks to division record tiebreakers.

Chiefs over BILLS: I can't believe that Fred Jackson is so blatantly trying to steal Fred Taylor's "Fragile Freddy" nickname. Jackson's knee has replaced Taylor's groin as the most unreliable body part in the NFL.

BENGALS over Browns: BenJarvus Green-Ellis will probably make the difference in what's sure to be an ugly game. In fact, the game will probably be so ugly that we need to liven it up with our Gratuitous Picture of the Week! 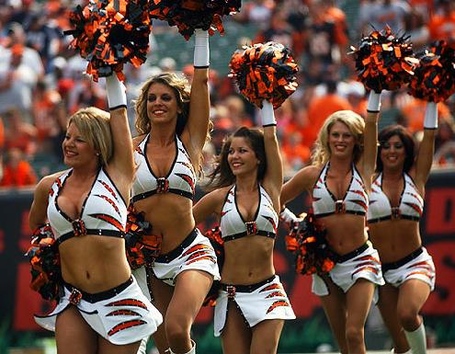 I'll take the Ben-Gals over BenJarvus any day. (via images.picturesdepot.com)

Raiders over DOLPHINS: Also known as the We Can't Get Out Of Our Own Way Bowl. I hope every kicker and punter in the league hugged their long snapper after watching Monday night's debacle in Oakland.

PATRIOTS over Cardinals: My suicide pool pick of the week, 1-0 after taking the Bears last week. How nervous are you if you own Wes Welker in fantasy right now? It feels like Bill Belichick would start 11 tight ends if he could.

GIANTS over Buccaneers: I'm pretty sure the Giants realize they have to win a few games in the regular season in order to make their usual improbable playoff run. I think this is one of those wins.

EAGLES over Ravens: Yes, I realize that Michael Vick held an interception contest with Brandon Weeden last week. Yes, I realize that the Ravens looked like juggernauts on Monday. But the Eagles are a classic "play to the level of your competition" team and they're at home against a team coming off a short week. Before you call me crazy: Vegas has Philly as a 2.5-point favorite, so I'm not even picking an upset here.

PANTHERS over Saints: I think Carolina actually played OK in Tampa last week, and I just don't see the Saints stopping anyone on defense after what I saw against the Redskins. Wait, did I just read into Week 1 too much like I said we shouldn't? Oh well. I'm sticking with the Panthers just for the sheer schadenfreude of an 0-2 start by New Orleans.

Texans over JAGUARS: Houston might have this division locked up by Halloween. I'm only half kidding.

STEELERS over Jets: Two bold predictions: New York will score less than they did last week AND Tim Tebow will be talked about too much even though he had little impact on the game.

CHARGERS over Titans: Tennessee definitely had the worst play of the year so far: on a play where they were intercepted, Nate Washington got knocked out and Jake Locker separated his non-throwing shoulder. Unfortunately for Titans fans I think that play might be a metaphor for their season.

FALCONS over Broncos: Do you think Peyton Manning called Eli after the game last week and said something like "I hope you enjoyed your little run without me last year, because big brother is BACK! I already have one more win and 28 more commercials than you this season! BOOM!" I'd like to think he did.