Things To Celebrate: Percy Harvin Is On Our Side

Share All sharing options for: Things To Celebrate: Percy Harvin Is On Our Side

The saga of Minnesota Vikings' wide receiver Percy Harvin is well-documented. He had issues with marijuana at the University of Florida, which apparently made him radioactive to some NFL teams prior to the 2009 NFL Draft. (Oh, no. . .a kid in college smoking pot!?) He fell to the Vikings with the #22 overall pick, and was named the 2009 NFL Offensive Rookie of the Year. He's had issues with migraines on and off throughout the time he's been in Minnesota, apparently had to be physically restrained from beating the tar out of former coach Brad Childress after the release of Randy Moss, and had a weird episode in mini-camps this year where he went from demanding a trade to loving Minnesota in the span of about 24 hours.

Yes, to call Percy Harvin "mercurial" would be an accurate assessment. And fans of the Minnesota Vikings should be happy as heck that the guy is on our side, as he's provided one of the bright spots for the Vikings over the first two weeks of the 2012 NFL season. Harvin is showing why he's considered one of the NFL's most dangerous players, despite having to do a lot of the heavy lifting in the Minnesota offense by himself. We'll look at this a bit further after the jump.

Harvin has been all over the field for the Vikings, showing his incredible versatility. He's currently tied for second in the National Football League in receptions with 18. He's currently tied for 10th in receiving yards with 188. Against the Indianapolis Colts this past Sunday, he had 12 grabs for 104 yards, the seventh time in his career that he's gone over the century mark in receiving yardage. He's also carried the ball seven times for 33 yards on the season thus far.

But where Harvin might be the most dangerous is on kickoff returns. He has returned five kickoffs this year, and is currently third in the NFL in kick return yardage with a 33.2-yard average on returns so far, including a long return of 50 yards in the season opener. Unfortunately, he has inspired some of his teammates into thinking that they can do the same things he can do. To that end, I have put together the following high-budget flowchart to assist with this, and if Vikings' special teams coach Mike Priefer is reading this, he has my permission to copy this flowchart and distribute it however he sees fit. 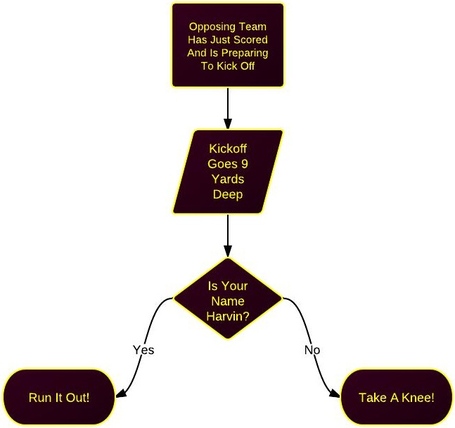 This might not be a completely properly done flowchart. I'm not a programmer, after all.

But, in all seriousness, and with all due respect to both Adrian Peterson and Christian Ponder. . .if something were to happen to Percy Harvin, this offense would be in big, big trouble. Harvin is dangerous because the Vikings get him the football in ways that can't really be prevented, whether it's handoffs, end arounds, or the quick hit passes at or near the line of scrimmage. We saw that against Indianapolis on a quick screen to the left side, during which Percy pulled what I believe someone in the Game Thread comments described as a "Matrix move." I wish I could find the video of it. . .maybe I'll have it in the next day or so if I can remember what play it was. (If anyone knows which play I'm talking about, put the time and stuff in the comments and I'll see if I can't get the folks from the mothership to make an animation of it.)

Those are the sorts of things that make Harvin dangersous. Very few players can do the things that Percy Harvin can do in the open field. He has an incredible combination of speed and quickness. . .a combination that I don't believe any other player possesses. Remarkably, for a player his size, he doesn't shy away from contact, either, and it's rare to see him brought down by one defender.

Harvin also seems to have developed a very good chemistry with Christian Ponder. When Ponder became the starting quarterback midway through last season and when Adrian Peterson had injury issues, Harvin stepped up in a big way. Barring injury, the Vikings need to make keeping #12 happy this off-season their highest priority, and there's no reason to think that they won't do so. I would hope that they would, anyway. . .he's already been making noise about wanting a new contract, and with him being well on his way to setting career high-water marks in pretty much every category, he isn't going to get any cheaper from here on out.

I hope that we're watching Percy Harvin in a Minnesota Vikings uniform for a very long time, and I'm happy as heck that he's on our side.