Share All sharing options for: Week 3 Preview: No Moral Victories

You remember Week 7 of last season, right? The lowly 1-5 Vikings hosted the undefeated Packers and came into the game as heavy underdogs. Much to our surprise, Minnesota was leading at halftime. Even after Green Bay made a big second half run (something Vikings fans were all too familiar with least year), the Vikings stormed back to within a score. They even had a chance to get the ball back late in regulation until they couldn't stop James freaking Starks from getting first down after first down to ice the game.

Afterward, most commenters on this site were pretty impressed with the Vikings' performance. We kept it close against the league's best team with a rookie quarterback and awful secondary. Not bad! The dreaded phrase "moral victory" kept on getting thrown around. It got so cheery that I felt the need to remind everyone that the Vikings still lost, and losing always sucks no matter how bad you were supposed to lose.

I feel a similar vibe heading into the Week 3 game against the San Francisco 49ers. The Niners are at or near the top of everyone's power rankings (including mine) with good reason. They were a bad bounce away from the Super Bowl last year and they look even better through two games this year. Nobody expects the Vikings to win on Sunday; that's why they're a 7.5-point home underdog.

So if the Vikings simply "hang around" the whole game and makes San Francisco work hard for their 3-0 record, forgive me if I don't spin our effort into clichés like "We can build on this!" and "If we play like this next week in Detroit we can definitely come out of there with a win!" I'm not being pessimistic, I swear. I just hate watching my favorite team lose, regardless of the circumstances.

Maybe it's just how I was brought up. When I was five, I was playing a dice game with my grandma. Being the fiery competitor that she has always been, she didn't let her young grandson win. If I won any rounds, it wasn't because Grandma was throwing me a bone to keep me happy.

After a few consecutive rounds of lopsided losses to Grandma, I started to pout. My mom tried consoling me by telling me it's just a game. And right then, my grandmother imposed some wisdom on me that I still live by to this day:

"You show me a gracious loser, and I'll show you a loser."

Join us after the jump to see how the Vikings can try to avoid being gracious this week.

First and foremost, the penalties need to stop. Replacement refs or not, the Vikings made a lot of boneheaded plays last week against the Colts. There were more small, brightly-colored pieces of laundry on the ground last Sunday than a bachelor party at Spearmint Rhino. The Vikings will have their hands full with the 49ers trying to beat them on Sunday; they can't have the Vikings trying to beat them too.

While the yellow flags need to disappear, the pass rush needs to reappear in a big way. Through two games against below average teams with young quarterbacks, the Vikings have four sacks and zero interceptions. And sure, both Blaine Gabbert and Andrew Luck are mobile. They did a pretty good job of scrambling and avoiding pressure. But it's going to be a very long day if the Vikings can't make Alex Smith much more uncomfortable than the first two opponents.

What the Vikings need to be uncomfortable with is San Francisco's time of possession. One of the best things you can do against a superior opponent is grind the clock out, keep it close, and then make just enough plays to pull off the upset at the end. (See: Kansas City vs. Green Bay, 2011).

The biggest point of discussion on our site this week has been the Vikings' lack of taking chances down the field. Whether it's Christian Ponder hesitance or Bill Musgrave's conservative calls, many Vikings fans want to see them air it out more. And I tend to agree with that school of thought. But for this week? Not as much. I want the Vikings to take the air out of the ball. Keep moving the sticks. Shorten the game. Pound the rock with a healthy dose of Adrian Peterson and Toby Gerhart. Are these time of possession clichés doing anything for ya? No? OK I'll stop, but hopefully you get the point.

Of course, that's much easier said than done against the defense we'll see on Sunday. For my money, NaVorro Bowman and Patrick Willis are the best linebacker duo I've seen since Lawrence Taylor and Pepper Johnson. Yeah, that good. The flying Smiths (Justin and Aldon) can terrorize any offensive line. If you're trying to find a weak spot in their secondary, I'll save you the time--there probably isn't one.

We've seen the Vikings offense look really efficient for spurts late in the first two games. They better get their act together much sooner this time around. A team as disciplined and methodical as the 49ers can make an early ten-point deficit make you feel like you're trailing by 30.

Ultimately I just don't see a team as young as the Vikings putting together the 60 minutes of football necessary to beat San Francisco. I'm terrified at the thought of Vernon Davis picking zones apart, the defense gang tackling ball handlers in the backfield, and even Andy Lee pinning us deep in our own territory when we do get a stop. (I'm also terrified of Randy Moss finding the end zone in his old stomping grounds, but that's more emotional fear than strategical.) San Fran is just better. I think they'll demonstrate why often enough to get a fairly comfortable victory.

And if that does happen, there's nothing moral about taking it graciously.

And now the rest of my Week 3 picks (home teams in ALL CAPS):

Giants over PANTHERS: No Hakeem Nicks. No Ahmad Bradshaw. No David Diehl. No problem! The Giants just play better on the road.

BEARS over Rams: Bold prediction alert: Danny Amendola doesn't catch as many passes as he did last week. Especially if you picked him up and are planning on starting him in fantasy football.

Bills over BROWNS: I almost want to pick the Browns here just so we can write off both of these teams as terrible.

COWBOYS over Buccaneers: Gambling on the Cowboys is a lot like riding shotgun with Amanda Bynes: there's about a 50/50 chance that it's going to end in a wreck.

Lions over TITANS: I already made this joke in my power rankings, but I think it's worth repeating: can we switch out the letter "O" with the number zero when talking about Tennessee's offense? Doesn't 0ffense just make more sense at this point?

COLTS over Jaguars: Hey, we played both of these teams! I was more impressed with Indy. The winner of this game is in the driver's seat to finish second in the AFC South, six games or so behind Houston.

Jets over DOLPHINS: Miami can't win this game, or else I might have to throw out all the jokes I had ready about how bad they are. I started keeping a separate Word document of Dolphins one-liners after the third episode ofHard Knocks.

SAINTS over Chiefs: Kansas City has looked so bad that I'm picking New Orleans, an 0-2 team, as my suicide pool pick. Of course, it doesn't really matter since New England knocked me and half of the other entries in the world out last week.

Bengals over REDSKINS: Josh Morgan's idiocy took center stage last week, but the injuries that Washington suffered on defense are going to be hard to overcome. You know what's not hard to overcome? Our Gratuitous Picture Of The Week! 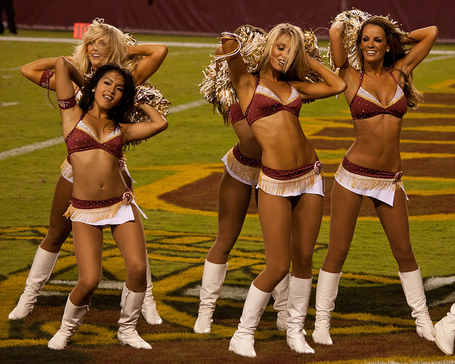 All our linebackers are hurt, but hey check out our real short skirts! (via farm7.staticflickr.com)

Eagles over CARDINALS: Hey, talking heads: you already called last week's game between Philly and Baltimore "The Battle of the Birds". You are NOT allowed to do it again this week.

Falcons over CHARGERS: This is Norv Turner's first time ever at 2-0 in 15 years as a head coach. You don't think he's just going to jump straight to 3-0 on his first try, do you?

Texans over BRONCOS: Bring this up to any one of your football-watching buddies on early Sunday afternoon. I bet the first thing out of their mouth is "Ooh, good game". I have no idea about this one, so I'll pick against Denver just because of their short week.

Steelers over RAIDERS: I'll bet you anything that Chris Berman runs a bunch of old highlights from the 70's before covering this game on The Blitz Sunday night. Bonus prediction: he'll also say "DEH RRRRAAAAAAYYYYYDEHHS" at least once.

RAVENS over Patriots: Since Aaron Hernandez is out, the Pats brought back Deion Branch and signed Kellen Winslow. What, the kid from the Tom Brady Uggs "pretend football" commercial wasn't available?

Packers over SEAHAWKS: If I get this pick wrong, former Wisconsin quarterback Russell Wilson will finally have fans in Minnesota.