The Vikings played to their strengths and blended the run and pass perfectly last week. Can they find their balance again in Detroit?

"It's all about moderation."

It's no different in today's NFL. Offensive coordinators are constantly trying find that ideal blend of personnel and game plan for each opponent. Should they go five wide to spread out the defense or bring in extra tight ends to create mismatches and protect the quarterback? Do they run to control the clock or go deep for the quick strike?

Meanwhile, defenses have to address their own ageless questions. How many guys should they send on the blitz in a certain situation? Do they bump receivers off their routes with press coverage or do they play a zone to keep everything in front of them?

No matter how effective a team is in a given aspect of the game, you can't be a one-trick pony in football. You could have eleven clones of DeMarcus Ware on the field and still get torched if you blitz on every down. Likewise, even the real-life version of Tecmo Super Bowl Bo Jackson will have a hard time finding holes if all you did was hand it off every play.

Balance. It's what the Minnesota Vikings found so well in their surprise victory over the San Francisco 49ers last week. They ran the ball 38 times and threw it 35 times (if you throw out the victory formation kneel downs). They sacked Alex Smith three times and sent pressure up the middle to flush him out of the pocket, yet they didn't allow any 49ers receiver to average more than 11.2 yards per catch.

Nobody epitomized the wonderful balancing act that the Vikings pulled off better than quarterback Christian Ponder. "Taking what the defense gave him" is underselling what Ponder was able to accomplish. When there was a guy open, Ponder found him. (Especially if his name was Percy Harvin or Kyle Rudolph.) When nobody was open, he either threw it away to avoid a sack or scrambled for big gains. His first quarter touchdown to Rudolph, a perfectly arching rainbow to the back of the end zone while retreating from the blitz on fourth down, may have been the best throw of his young career. The 23-yard touchdown scamper in the second quarter was the best run of his young career. Ponder made more right moves than Tom Cruise did back in '83.

But we all know that one great game does not equal a great season. The perfect balance can leave a team just as quickly as it came. Just ask the Vikings' upcoming opponent, the Detroit Lions. After years of toiling in the doldrums of the standings, the Motor City Kitties finally emerged as a playoff team last year. Although they were trounced in the first round by New Orleans, the Lions had to be happy with the direction they were heading. It seemed like the balance of playmakers on offense and young talent on defense was finally paying off.

Then the offseason arrests starting coming. Then Jahvid Best got hurt again. Then Mikel Leshoure got suspended for two games before even playing in his first one. Matthew Stafford, who avoided the injury bug last year, just suffered a hamstring injury that knocked him out of the Tennessee game. Suddenly one of the most promising teams in the league had stumbled into a 1-2 start and risks falling two games behind Minnesota with a loss on Sunday.

The teeter totter of momentum appears to be tipped in the Vikings' favor at the moment, but we know that the fulcrum can shift from week to week in the parity-filled NFL. And the Lions have the perfect weapon to tilt the balance of any game in their favor: Calvin Johnson.

I will readily admit that I am terrified every time the ball enters Megatron's zip code. He could have the entire defense pig piled on top of him while the ball is in the air and I'd still bet on Johnson to come down with it. The guy is the focal point of the opposing defense every week and he still consistently puts up stat lines like the 10/167/1 he had against the Titans. I know the Vikings have an improved secondary this year, but unless they're allowed to use foreign objects (something that was probably possible before the NFL referee lockout finally ended late Wednesday) they're going to be in trouble.

Yet even Megatron can't do it on his own. You still need a ground game to take some pressure off of the aerial attack. Detroit may have found their offensive balance in the aforementioned Leshoure. Thirty touches for 134 total yards and a score? Not a bad NFL debut. Minnesota's run defense is still stout, but it ain't what it used to be. Leshoure can help the Lions find a better offensive balance and keep the Vikings out of rhythm.

Unfortunately for Minnesota, the rivalry with Detroit seems to be finding its balance too. After the Vikings took 16 of 17 games from 2002 to 2010, the Lions have won the last three. The Vikings haven't won a divisional road game since Brett Favre's return to Lambeau. Throw in the inevitable letdown after such a well-played game last week and I'm not sure I like the Vikings' chances. After all, there has to be a reason that Minnesota is still around a 6-point underdog this week, right? Therefore, I'm sad to say that I'm going with the...

...wait, what's that? GOOD GOD, THAT'S JEROME SIMPSON'S MUSIC!!! HE'S COMING BACK FROM HIS SUSPENSION TO TERRORIZE DETROIT'S AWFUL SECONDARY! BAH GAWD KING, HE'S EXACTLY WHAT THE VIKINGS NEED TO SHIFT THE BALANCE BACK IN THEIR FAVOR!!

(On second thought, I'll stick with the Vikes.)

And now for the rest of my Week 4 NFL picks (home teams in ALL CAPS):

RAVENS over Browns: I just picture Rich Eisen praying on Wednesday night: "Please God, let Brandon Weeden suck a little less so this isn't a huge blowout. We can't have our first game on Time Warner Cable be a complete snooze fest." Well Rich, you might just get your wish, because I'm making this my suicide pool pick of the week. Based on my 1-2 record so far this season with those picks, we might even see a Cleveland upset.

FALCONS over Panthers: If I get this pick wrong, I'm going to sulk and act as depressed as Cam Newton did after last week's loss to New York. Cam did not find the balance between "caring about your team" and "acting like a little crybaby".

Patriots over BILLS: New England is under .500 for the first time since the opening week of 2003. I don't think it will last very long, even against the suddenly competent Bills on the road.

Chargers over CHIEFS: Impressive comeback win by Kansas City last week, but it was against a crappy winless team. (Gosh, that was even more fun to type than I thought it would be.)

RAMS over Seahawks: Just to make things right with the football gods. Seattle needs that second loss on their record ASAP. Two lingering questions about the Seattle Screw Job from Monday night: 1) Does the Fail Mary catch make up for all the Seahawks fans bitching about the Super Bowl against Pittsburgh, or are the circumstances too different? 2) If Tim Tebow threw that fateful pass instead of Russell Wilson, would it have melted the internet?

49ers over JETS: Revis Island was just converted into a parking garage for the remainder of the season. This can't bode well for the Jets.

TEXANS over Titans: Call me crazy, but I don't think scoring five touchdowns of over 60 yards and still needing an overtime miscommunication to win is not a sustainable business model. Since I have nothing else to say, how about our Gratuitous Picture of the Week? 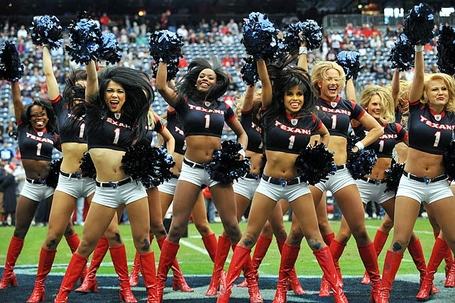 "We will beat the Titans with ease, but why's this blue paint on our knees?!" (via ultimatecheerleaders.com)

BRONCOS over Raiders: One thing I bet you won't see in this game: Peyton Manning getting his helmet knocked off. I forgot how tightly he clamps that sucker on his freakishly large head! Every time they show him on the sidelines with his helmet off it looks like someone smacked him in the forehead with a hardcover version of The Odyssey.

CARDINALS over Dolphins: I don't know if I'm ready for a world where the Arizona Cardinals are 4-0. Which is why I'm picking them--picking against them sure as hell didn't work the first three weeks.

Bengals over JAGUARS: Everyone calls all the games between teams with bird mascots "The Battle of the Birds". So why isn't this game being called "The Klash of the Kitties"?

PACKERS over Saints: Eaux and four. I like the sound of that. By the way, you just know that Sean Payton is secretly ecstatic about the awful start by New Orleans. "See?! It's all about the coaching!! MY GENIUS HAS BEEN PROVEN BY MY ABSENCE!" (That, or the Saints are just getting a heaping dose of comeuppance for cheating.)

Giants over EAGLES: I had a good Michael Vick joke ready here, but Vick already threw it directly into a post written by another writer.

Bears over COWBOYS: I went back and forth on this game about twenty times, which will probably match the total amount of quarterback sacks in this game. Both teams are so schizophrenic that they should just call this the Bipolar Bowl.