Share All sharing options for: Week 1 Preview: The First Day Of School

I'm getting old. I'm already well aware of this. But I've never felt myself age so quickly as when I checked my Facebook feed on Tuesday afternoon.

Picture after picture after picture of kids in brand new clothes accompanied by shiny new backpacks. Captions like "I can't believe she's in kindergarten already!" and "One second grader and one in preschool...where has the time gone?" and "I held it together until he got on the bus...but then it was nothing but tears for mom!"

How the hell did this happen? It seems like only yesterday that I was laughing at all the hilarious pictures my friends posted from their hedonistic nights out at the bar; now I find myself thinking how adorable their little ones are in their new outfits.

While time can certainly sneak up on us, the first day of school brings out an excitement and wistful nostalgia for kids of all ages. Everyone starts at the same point. Everything feels new. Everyone is excited to see their friends again, curious to see if they look different. We're all a little nervous but mostly hopeful that the new school year will be better than the last.

Doesn't that sound a lot like the beginning of the NFL season? The beginning of the professional football "school year" comes with a lot of the same emotions. Everyone starts at 0-0. Fans are excited to see their favorite players again, curious to see what they'll play like. We're all a little nervous but mostly hopeful that the new season will be better than the last.

Join us after the jump as we continue to go back to school for the Week 1 preview.

OOOH, BACK TO SCHOOL! Unfortunately for the Vikings and Jaguars, the 2011 season felt like both teams needed a Billy Madison-like redo. Minnesota and Jacksonville combined for a horrifying 8-24 record behind unprepared rookie quarterbacks and lackluster defenses. But the first day of school isn't a time to dwell on the past, especially when there are so many things to look forward to.

For instance, one of the most exciting things about coming back to class in junior high was checking to see which girls had...um...developed over the summer. In an odd way, it's a lot like what fans are expecting to see out of Christian Ponder and Blaine Gabbert. We all want to see how the young quarterbacks have developed over the summer too. (OK, maybe that was a very odd way. I just compared quarterback play to boobs. Let's just move on before I get myself into trouble.)

Then there's the kid that spent the entire summer out of town on vacation. He was one of your best friends so it was weird to go months without seeing him. Sure, he looked like the same guy when he came back from his trip, but you were always kind of weary that he'd act differently when he came back. You hoped that the time away wouldn't make you drift apart.

Of course there's always a new kid or two in class every school year, and the NFL is no different. The Vikings hope Matt Kalil can anchor a line that was as firm as melting Jell-O a year ago. Justin Blackmon should be just the type of go-to target that Gabbert so desperately needs to kick start Jacksonville's stagnant offense. The new kids are going to feel a lot of peer pressure to blend in as soon as possible. If not, they run the risk of getting bullied by the older kids. And nobody likes wedgies and swirlies in the form of sacks and big hits going across the middle.

But this NFL school year, there's one major difference from normal years. The regular teachers are on strike so everyone is starting with substitute teachers. The replacement referees seemed to do a decent job on opening night Wednesday. However, as I wrote Thursday, the Vikings and Jaguars might not get such serviceable subs. Hopefully the "teachers" stay out of the way and let the students shine on Sunday.

As to which pupils will earn the higher grades in the Metrodome? It's tough to tell. These teams have so many similarities that it doesn't even take a handful of corny school analogies to make them sound alike. I have a feeling that we'll see quite a bit of both star running backs but Toby Gerhart and Rashad Jennings will still get the lion's share of the touches. Putting the ball in Percy Harvin's hands as much as possible should be a priority for the Vikings; I'm sure the Jags will be looking to keep Blackmon as busy as possible on their end.

I think the biggest key to the game is which quarterback plays more consistently and avoids the big mistakes. The Vikings' front seven should be able to cause enough trouble to throw Gabbert off his game and help out Minnesota's unproven secondary. Both teams are young, and youth usually plays a lot better at home. I'll take a late Blair Walsh field goal to seal the deal.

C'mon Vikings. Don't make me get the first True/False question on the test wrong. SKOL TO A NEW SCHOOL YEAR SEASON!

As for the rest of my multiple-choice NFL Week 1 picks, allow me to hand in my Scantron sheet (home teams in ALL CAPS):

GIANTS over Cowboys: Oh great. I already started the year with an F, and I have the Tweet report card to prove it. I picked up Kevin Ogletree in two of my three fantasy leagues after the game, which of course means he won't score 23 fantasy points the rest of the season.

BEARS over Colts: My suicide pool pick of the week. Even if the Legend of Luck starts early, I don't think Indy's defense can stop Jay Cutler, Matt Forte, and Brandon Marshall enough to keep it close.

Eagles over BROWNS: As one of my favorite YouTube videos of all time says: STILL CLEVELAND!

LIONS over Rams: Two bold predictions for this game: Calvin Johnson will out-jump three opponents for an amazing catch down the field, and Steven Jackson fantasy owners will be pissed that he still plays on the Rams.

Patriots over TITANS: Bernard Pollard doesn't play for the Titans, does he? OK then the Pats are just fine, even with their shoddy offensive line in front of Tom Brady.

Falcons over CHIEFS: I want to pick the upset here, but I think this is finally the year that Mike Smith figures out how to use Roddy White and Julio Jones in the red zone instead of pounding Michael Turner up the middle for no gain.

SAINTS over Redskins: The Saints will clean up Washington just like a really good paper towel. You know, like a BOUNTY paper towel.

Bills over JETS: Here's a joke you've already heard at least 1,837 times this week: when do you think the Tebow chants will start?! Hmmm?! Huh?! Like, probably after the first Mark Sanchez incompletion, amiright?! HILARIOUS!

TEXANS over Dolphins: I'd feel better if Ryan Tannehill's wife was starting this game instead of her husband. Not because she'd play better, but because she's the subject of our first GRATUITOUS PICTURE OF THE WEEK! 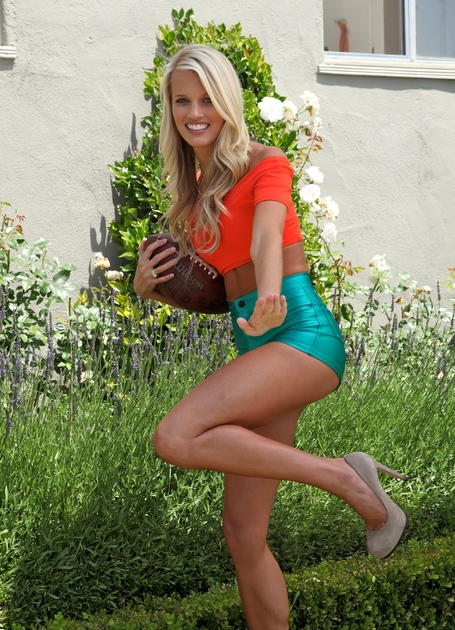 PACKERS over 49ers: Hmm, I wonder if Aaron Rodgers will have any motivation. His team got bounced their first game of the playoffs while the 49ers almost made the Super Bowl. His team drafted him 24th while his hometown 49ers drafted Alex Smith first overall instead. Think he'll be pumped up for this game? Naaahhh.

Seahawks over CARDINALS: I'm not sold on Russell Wilson yet, but I have a lot more faith in him than in John Skelton.

BUCCANEERS over Panthers: Sleeper team alert! I think the Bucs will be pretty good this year. I also think the Panthers still don't have much of a defense to help out Cam Newton.

Steelers over BRONCOS: Hmm, I wonder if the Steelers will have any motivation. They had to spend the last 250 days watching highlights of their season abruptly ending at the hands of Tim Tebow and hearing how Denver's new quarterback will launch the Broncos to new heights. Meanwhile, Pittsburgh's largely an afterthought in most season previews. Think they'll be pumped up for this game? Naaahhh.

RAVENS over Bengals: Just because of that awesome Ray Lewis intro on Madden 13. Seriously, check it out. I usually think Lewis is way too over the top and full of himself, but his speech in that game made me want to tackle something. (On an unrelated note, I'd like to apologize to my cat for randomly tackling it a few nights ago while I was playing video games.)

RAIDERS over Chargers: Because Darren McFadden won't get hurt in Week 1...right?