I believe we hit this one either the day of the wild card game or the day after, but I didn't get a chance to really put anything up about it until now. 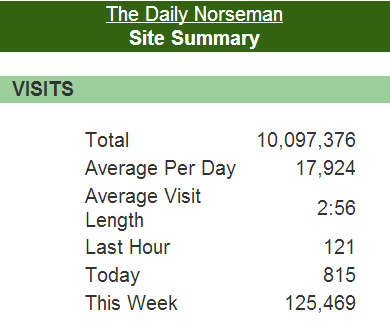 Yes, we have passed yet another traffic mark here at The Daily Norseman, and it's a particularly large one, as we have gone over the 10,000,000 mark in all-time visits to the site here since its inception in July of 2006.

We got to that point, at least partially, on the strength of the two biggest traffic days in the history of the site. On December 30, the day of the regular season finale, DN pretty much obliterated every established traffic record previously established by the site, bringing in a record 45,601 visits and 76,217 page views.

That's because on January 5, even more people dropped by our humble little corner of the internet, as our records jumped to 48,635 visits and 83,389 page views. Those are pretty crazy numbers for a site like this one. . .far bigger than any draft or any stadium debate or any Randy Moss-related drama has brought to our site before.

The rest of the staff here has brought every bit as much of this notoriety to us as I have, and I would be remiss if I didn't once again thank Ted, Eric, Skol Girl, Kyle, Mark, and Arif for all the time that they've dedicated to everything they've placed on the site over the time they've been part of this whole thing.

As always, however, the biggest thanks has to go to all of you who read the site. . .whether you've been here once, whether you've been here every day, or whether you're here constantly, this site exists to bring all of you the information and insight you want about something that all of us are passionate about. Thank you to each and every one of you for your patronage, your feedback, and your FanPosts and FanShots. . .all of which are every bit as important to this community as the main stories themselves.

Thanks again to each and every one of you.