The Minnesota Vikings were one of the surprise teams of 2012. One reason for their big turnaround: they were relatively healthy.

Share All sharing options for: Vikings Had Very Good Injury Luck In 2012

As the old saying goes, it's better to be lucky than good. The 2012 season seemed to be a good mixture of both for the Vikings.

It's never easy to go from 3-13 to the playoffs in one season. A lot of things have to go right to have a seven-game positive swing in the standings. One of the best ways to turn a team around is drafting well. Rick Spielman and company had one of the best immediate-impact drafts in franchise history with Matt Kalil, Harrison Smith, and Blair Walsh greatly upgrading their respective positions. Jarius Wright, Josh Robinson, and Rhett Ellison made an impact as well.

In the parity-driven NFL, most games come down to a handful of plays. Winning the close ones can make all the difference between a successful season and a complete failure. Case in point: the Vikings were 2-9 in games decided by 7 points or less in 2011. They were 5-1 in games in such games in 2012. (Side note: is anyone else surprised that we ended up with only six one-score games this season? I was when I looked back at it. It felt like there were a lot more.)

Of course it also helps to have the best running back in the NFL bringing his dominance to another level along with a slowly-but-surely improving young quarterback. (Seriously, Christian Ponder improved overall this year across the board. I looked it up and everything.) We've already covered many of the reasons for the Vikings' improvement this year, but one key factor still might be getting overlooked.

Relatively speaking, the Vikings were really, really healthy in 2012.

In the Deadspin article that everyone's sure to be talking about today, they had an excellent breakdown of team-by-team injuries. (OK, so maybe there might be another story on Deadspin that's currently getting a little more publicity right now. But still.) They start by talking about how some teams over-reported their injuries; to nobody's surprise, the AFC East led the league in lengthy injury reports. But the most meaningful chart showed how many players on each team actually missed games after appearing on the injury report: 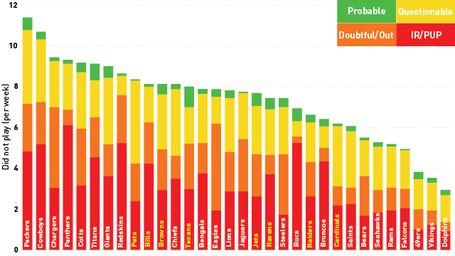 If you click and enlarge the image, you'll see that only the Dolphins had fewer missed games than the Vikings. Minnesota had only one non-IR player miss more than eight games, which is pretty incredible over the course of the season. That one player happened to be Percy Harvin, undoubtedly the Vikings' best receiving option, but overall the team was incredibly healthy this year. And yes, the Packers were the most injured team this year. So all the bitching that you hear from Green Bay fans about how beat up they were is actually sort of justified. (But it still doesn't excuse them from being the butt hurt whiners that they are--the waaaahhhhmbulance was still way more active than the Packers' training staff this year.)

Another interesting Vikings quirk from the Deadspin report: if a player was listed as Questionable, it usually meant they were still good to go. The Q next to a player's name is one of the most maddening things for fantasy football managers and gamblers alike--it means that the player may or may not play. But in Minnesota's case, it meant there was a 75% chance they were going to play, which led the league: 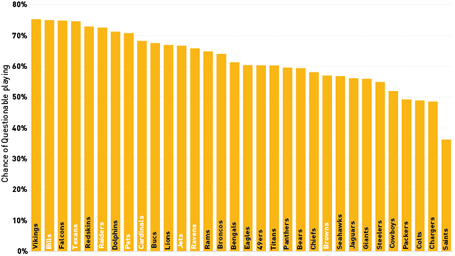 For me, there are two major takeaways from this information:

Here's to hoping that the Vikings can find an even better blend of lucky and good in 2013.