The Vikings and Packers will square off in Mortal NFC North Kombat for the third time on Saturday. Who will end up with the finishing move?

Share All sharing options for: Wild Card Preview: Round 3...FIGHT!

If you're a male between the age of 25 and 40, chances are you read the end of this article's headline in the voice of the announcers from Mortal Kombat or Street Fighter. (If you're not in that target demographic, I apologize for the references that will make absolutely no sense to you. I promise I'll mix in some football too.) I spent a frightening amount of my childhood playing those two classic video games on my Sega Genesis. I can barely remember any geometry postulates, but I can recite by heart how to throw the "GET OVER HERE!" harpoon with Scorpion (back, back, low punch) or how to throw a "HA-DO-KEN!" fireball with Ryu and Ken (down to forward + punch).

The most exciting moments of each game always came when it was down to the third and final round. If you were playing against the CPU, you knew that one slip up meant you had to do it all over again. But if you were squaring off against someone you knew really well? The tension was much more palpable. You already split the first two rounds and you knew exactly what your opponent liked to do. One perfectly timed attack or block was the difference between loudly gloating about your victory and throwing your controller down in frustration.

And that's what we'll have on Saturday--Round 3 of NFC North Street Fighting Mortal Kombat. The third time the Minnesota Vikings and Green Bay Packers will square off in a span of 34 days. One team will be able to FINISH their opponent's season in brutal fashion while the other will only be able to watch in angst as their season ends in a super-slow motion KO. So which team will get to use one of their Continues while the other is forced to reset their system until next season?

Let's start with the most discussed player of the matchup, Mr. MVPeterson himself. (Ted's "debate" with Mile High Report on Tuesday was cute and everything, but let's face it--that trophy belongs to Adrian Peterson.) The best runner in the universe has racked up over 400 yards rushing against the Pack this year even though he's facing defensive fronts that look like Green Bay's team photo on most downs. You can't stop him. You can't hope to contain him. Hell, you can't even slow him down with less than three defenders the way he has been running lately. But while AP came within one cutback of Eric Dickerson's rushing record, history hasn't exactly been kind to other high-yardage rushers in the playoffs. Grantland's Bill Barnwell pointed out that there have been 14 previous playoff teams that featured a running back with 1,800 or more rushing yards. The production for those backs drops pretty significantly in the postseason:

After averaging 5.3 yards per carry with 123.6 rushing yards per game during the regular season, the backs combined to run for 4.5 yards per attempt and just 90.7 yards per game. Those numbers are still respectable, of course, but the superior competition and likely improvement in opposing run defenses were enough to slow these elite backs down.

Yes, yes, I can hear you screaming at your computer screens: Adrian Peterson isn't "just" an elite back. I agree. But Barnwell continues to say that only one of those previous 14 backs that qualify won the Super Bowl--the Terrell Davis Broncos. They had John Elway at quarterback. Christian Ponder wears the same number as Elway did...aaaand that's where the comparisons end.

What a roller coaster Ponder has put us all on this year. After the Vikings lost in Lambeau just over a month ago, I wrote an apology letter to AP because he had to deal with such awful quarterback play. Ponder was downright atrocious in that game--if he was even average, the Vikings had a very legitimate shot of winning. But since Minnesota's final loss of the regular season, Ponder has been--wait for it--better than average. In fact, he had the second highest QBR of any quarterback in the league over the last four games of the season. The opponents were no slouches either; the Vikings beat foes that finished with a combined record of 40-23-1 down the stretch. Make all the marriage jokes you want. Perhaps we're simply witnessing a quarterback coming into his own towards the end of his second season in the NFL.

Or perhaps we should look at other players that need to step up instead of heaping all the responsibility on Ponder. The Packers are as healthy as they've been all year heading into the Wild Card round. Clay Matthews is now fully phased back into the defense and it sounds like Charles Woodson will return to give their opportunistic secondary more depth. So the Vikings need Jerome Simpson and/or Jarius Wright to make a few more big plays and keep the sticks moving. Three and outs could be killers on Saturday because Green Bay is getting healthy on offense too.

Barring any setbacks, they'll have their full arsenal of dangerous wide receivers: Greg Jennings, Jordy Nelson, James Jones, and Randall Cobb. As Kyle mentioned Wednesday, the health and effectiveness of Antoine Winfield might be the biggest factor in this game. Lord knows that we don't want to depend on A.J. Jefferson and Marcus Sherels to suddenly morph into Darrelle Revis.

But not even a secondary full of Revises (Revii?) could shut down that many weapons if the Vikings don't put pressure on Aaron Rodgers. The Green Bay signal caller just finished the quietest 4,295-yard, 39-touchdown, 108-quarterback-rated season in the history of the league. The Vikings played their best game of the year last Sunday and still needed a last-second field goal at home thanks to Rodgers' precision. Now that he has all his toys back, the only way Rodgers won't carve up the Vikings secondary is if he spends a healthy amount of time on his back. This is where Jared Allen, Everson Griffen, and Brian Robison come in. Defensive coordinator Alan Williams needs to find the right balance in this rotation (hint: MOAR EVERSON) and dial up blitzes at the right time and place (hint: less than last week) to make Rodgers uncomfortable as possible in his home stadium.

Recent history has shown us that making Rodgers uncomfortable at home in the playoffs might not be as hard as it sounds. But all the fun "Daunte Culpepper has won more playoff games in Lambeau than Aaron Rodgers" facts aside, their clunker against the Giants last year had more to do with rust than choking. Green Bay won't have that this year--no byes, no benching starters (at least the ones that weren't injured). What the Packers will have is an opponent with an up-and-down quarterback. An up-and-down quarterback that they've seen twice in the past month. An up-and-down quarterback that is playing in his first playoff game. On the road. In the cold. With what might be a pretty significant injury to the elbow on this throwing arm.

I would love nothing more than to watch the Vikings improve to 2-0 all-time in the playoffs in Green Bay. Absolutely nothing would make me happier. (Not even my alma mater North Dakota State University clinching their second straight FCS National Championship a few hours before the Vikings kickoff on Saturday. GO BISON!) But I just have a hard time believing that the Vikings can replicate their nearly flawless performance from a week ago on the road. Anything is possible when Adrian Peterson is on your team, but I have the sinking feeling that the Green Bay fans will be screaming out "FINISH THEM!" as the Packers pull away late.

The good news about me picking the Packers: I have gone 2-2 in my playoff picks in every Wild Card and Divisional round for the past five years. So if I get 2 out the 3 following Wild Card picks right, that means we're golden! (Home teams in ALL CAPS)

TEXANS over Bengals: Every game this weekend has an interesting story line. Minnesota at Green Bay: hated division rivals facing off for the third time. Indianapolis at Baltimore: #ChuckStrong vs. #RayRetires. Seattle at Washington: the battle of dynamic rookie quarterbacks. And then this game...billed as...um...a rematch of last year's crappy playoff game! Let's just show the Gratuitous Picture of the Week and get to the fun games. 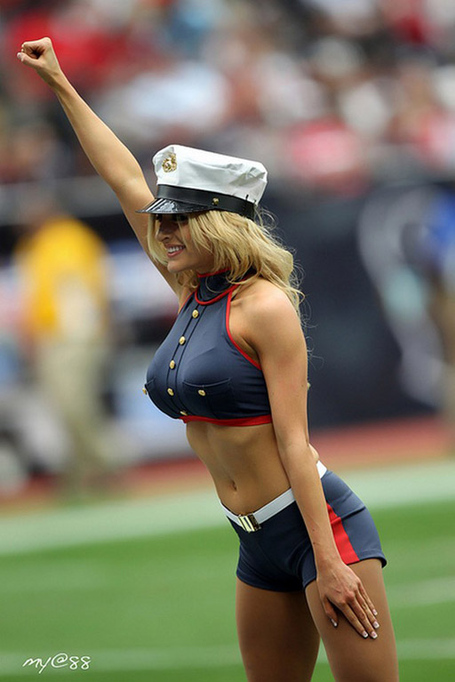 "Hey there, wake up, why you snoring?! Oh yeah, cuz this game is boring!" (image via www.hottestfan.com)

RAVENS over Colts: Before you ride the Andrew Luck and Chuck Pagano bandwagon (a.k.a. the LuckChuckWagon) into the next round over the struggling Ravens, go back and take a look at Indianapolis' ridiculously easy schedule. They beat only three winning teams all year. They went 11-5 and still got outscored by 30 points on the season. They're a great story, not a great team. Plus I'm all for anything that extends Ray Lewis' career and keeps him off ESPN for a little while longer. You just KNOW that he's going to give fake motivational speeches to each team before Monday Night Football games in an awful segment called "Determi-RAY-tion" or something like that.

Seahawks over REDSKINS: RGIII is only at about RGII¾ strength right now, making it easier to pick Seattle here. There will be other important players on the field for this game, but 95% of the coverage will go towards Robert Griffin III and Russell Wilson. We can only hope the game is as exciting as everyone thinks it will be.