Week 7 NFL Picks And Preview: Are You Ready For Some (Bad) Football?!

The woeful 0-6 Giants and 1-4 Vikings will be on national TV for all to see on Monday. Which team will embarrass themselves the least?

Share All sharing options for: Week 7 NFL Picks And Preview: Are You Ready For Some (Bad) Football?!

ESPN permanently cut ties with Hank Williams Jr. a couple years ago thanks to Mr. Williams being a little overzealous with sharing his political beliefs. But that doesn't mean we can't appreciate the old school goodness of his iconic classic "All My Rowdy Friends" that Williams Jr. personalized for years on Monday Night Football. Since Giants and Vikings fans alike would like to forget 2013 before it even ends, I figured that we could use some nostalgia to start this week's preview. Take it away, Hank!

Pump up the volume, let's make some noise!
But I guess we wouldn't blame you for changing to "The Voice".
Eli and the Giants still don't have a win,
While that Vikings team still looks ugly as sin.
So stay in your seats, act just like the crowd
'Cuz the bitching and the moaning is about to get LOUD...

ARE YOU READY FOR BAD FOOTBAAAAALLLL?!
THE WORLD'S SADDEST PARTAYYY!!
The way the Vikes shuffle quarterbacks,
We barely even know who's starting!

Get the barf bags ready, neither team is right,
'Cause all my rowdy swear words will get used tonight!

Less than 24 hours after America watches what's being hailed as the game of the season so far--Peyton Manning's return to Indianapolis--the nation will be force-fed this clunker featuring two teams with a combined record of 1-10. I'm guessing NBC will get just a couple more eyes on their game than ESPN does. If the NFL allowed flex scheduling for early-season Monday night games, there's no doubt that this game would be gone from the ESPN airwaves faster than Busch Light at a NASCAR race.

(Don't worry, ESPN execs. NBC doesn't get all the good games. Next week they get the Vikings. Besides, you'll still spend waaaaay more total airtime on the Broncos and Colts than the game running on your station.)

It's blatantly obvious that both the Vikings and Giants have been abysmal in 2013. But just how bad have they been? Let's start with the (complete lack of) defenses.

No team has allowed more points through six weeks than the New York Giants. The Bears scored 27 points against them last week, which marked the first time all season a team didn't hang 30 on the G-Men. Their usually formidable pass rush has virtually disappeared--they have a league-worst five sacks. Pro Football Focus has the Giants rush defense ranked (perhaps too) high but their pass rush and coverage ratings are both in the bottom third of the league.

No team that has already had their bye week has allowed more points through six weeks than the Minnesota Vikings. Like the Giants, they have held an opponent under 30 points just once. Their back seven isn't breaking bad--they're badly broken. Pro Football Focus has the Vikings pass rush ranked in the middle of the pack but their run defense and coverage ratings are both in the bottom fourth of the league.

If the previous two paragraphs sounded similar, they should; there's no defending the play of either defense so far. But if you thought the Vikings defense was struggling (understatement of the year), it might get worse. Harrison Smith is likely out for a few weeks and Desmond Bishop is definitely out for the year. Losing the team's second leading tackler and the only linebacker that hasn't been a complete mess (albeit in very limited duty) isn't going to help anything.

It's really hard to win with sub-par line play on either side of the ball while allowing so many points; the Giants have proven that it's impossible to win if you fit the aforementioned criteria and have a -16 turnover ratio. While turnovers have killed the Giants in 2013, most stat nerds will tell you that they are very difficult to predict in the NFL. Even teams as prolific at giving the ball away as the Giants will eventually start regressing towards the mean. So don't just expect a bunch of takeaways to fall into the Vikings' laps on Monday. If Smith is out, you and I have as many picks this season as anyone that will line up in the Vikings secondary on Monday. It will be tough for Eli to throw interceptions to the thin air that's likely to cover Victor Cruz, Hakeem Nicks, and Rueben Randle for much of the evening. I want to see the infamous Eli Manning Face as much as possible on Monday but I don't think we can count on it.

IT WILL BE TOUGH FOR ELI TO THROW INTERCEPTIONS TO THE THIN AIR THAT'S LIKELY TO COVER VICTOR CRUZ, HAKEEM NICKS, AND RUEBEN RANDLE FOR MUCH OF THE EVENING.

But it isn't all about Eli's woes this week--the Vikings have yet another new quarterback to let us down lead the team! I already talked way too much about Josh Freeman in last week's preview so I'll be short this time around. Believe it or not, I'm actually OK with Freeman getting the nod on Monday. He's probably the least of three evils right now. Besides, it's not like Bill Musgrave's offense has the reputation of being a brain-buster. It shouldn't take much more than a week to digest his carton of vanilla offense. (Ooh, Photoshop request alert! Someone please create a picture of "Musgrave's Maddeningly Mild" vanilla ice cream by Kemps and post it in the comments.) Rushing Freeman to the field might not be the best idea but at least it will distract us from how bad the rest of the team is playing.

Wow. This might be the first time I have ever made the case to pick neither team in a game. If this back-and-forth about two similarly bad teams still has you on the fence about which team will win Monday, allow me to present a little history lesson for you. On October 5, 2009, Brett Favre and the Vikings defeated the Green Bay Packers on Monday Night Football by a score of 30-23. Since that day, here are the final scores of the primetime games that the Vikings have played in:

Which leads me to these four fun facts about the Vikings in primetime:

I'd love a Vikings win on Monday, but recent history has shown time and again that they wilt under the bright lights. I'm gonna go ahead and pick the 0-6 team. Either way I think Hank Williams Jr. is glad he doesn't have to make a ditty for this one.

"Are you ready for some ulcers?! A Prilosec partaaay!"

And now for the rest of my Week 7 NFL picks (home teams in ALL CAPS):

Seahawks over CARDINALS: If you want to watch a nationally televised game where both teams actually know how to play defense, tuning into this game might be a better idea.

DOLPHINS over Bills: My Survivor Pool pick of the week, now 6-0 on the season after Denver dispatched the Jags last week. Because picking a team on a two-game losing streak going against a divisional opponent that has played everyone incredibly close this year couldn't possibly go wrong.

REDSKINS over Bears: Yeah, this pick doesn't make much sense. Would throwing in the Gratuitous Picture of the Week distract you from thinking about it too much? 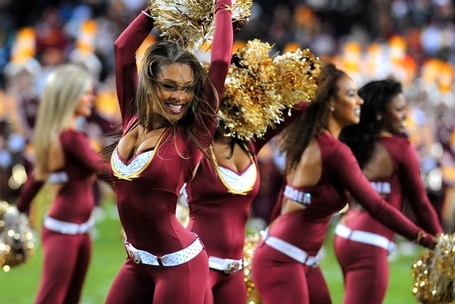 "We can't tell what covers less / Our outfits or our defense!" (image via media.washtimes.com)

LIONS over Bengals: The winner of this game will be in the CATbird seat of their division. They'll be more popular than CATS on the internet. They'll be the CAT'S meow. The CAT'S pajamas even. They'll still be a SCRATCH ahead of teams like the Panthers and Jaguars. (These cat puns doing anything for ya? No? OK, next game.)

Cowboys over EAGLES: Crap. I just realized that this game is going to break the mandate that all NFC East teams must remain at .500 or below at all times. (Wait, there's no mandate? The division just sucks? OK, next game.)

PANTHERS over Rams: Carolina is definitely awesome. There is absolutely no chance that the Vikings just made them look so good last week.

Chargers over JAGUARS: Jacksonville is coming off what was widely considered their best game of the season. They lost that game by 16 points. Ladies and gentlemen, your 2013 Jacksonville Jaguars!

49ers over TITANS: Conspiracy theory: Jake Locker faked an injury to miss this brutal stretch of schedule for Tennessee so he could keep his stats looking good. OR MAYBE HE GOT INJURED ON PURPOSE TO SELL IT EVEN BETTER?! [Mind explodes]

PACKERS over Browns: How bad was Brandon Weeden's game-clinching interception against Detroit last week? Christian Ponder saw it on his iPad while sitting on the bench and pretending to listen to the play calls last week and muttered, "Oh man I NEVER would have thrown that one."

CHIEFS over Texans: Houston hasn't been the same since losing to Minnesota late last season. It's hard to get that Vikings stink off of you. Or maybe it's Matt Schaub? I can't tell. They smell a lot alike.

STEELERS over Ravens: What can I say? I just love the crappy 1-4 home teams this week. I picked all three of them.

Broncos over COLTS: If I'm wrong about this pick, expect two things to happen on Twitter: 1) Jim Irsay tweets something dumb that resembles a text orgasm, and 2) there are roughly 2.5 million unoriginal "Out with the old, in with the new!" jokes tweeted by beat writers across the nation.