Precision Play Of The Week: Christian Ponder To Jarius Wright

Share All sharing options for: Precision Play Of The Week: Christian Ponder To Jarius Wright

As we've previously mentioned, there weren't a whole lot of highlights from this past Sunday's game for the Minnesota Vikings, but one of them is good enough to be our Precision Play of the Week, brought to you by the folks at Gillette.

The play we're going to be looking at is the 38-yard touchdown pass from Christian Ponder to Jarius Wright to tie the game at 10 in the second quarter of play. We'll attempt to take a look at how the play developed and see how, exactly, the Vikings got into the end zone on this one. Usually the breaking down of plays is Arif's field of expertise, but I'm going to give it a whirl on this one and hope that I don't screw it up too badly. Also, you may click on any of the pictures to embiggen them.

This was a call on first down following a 20-yard pass from Ponder to John Carlson. The Vikings come out in a pretty tight formation, with Carlson, Wright, and Rhett Ellison all bunched on the right-hand side and Jerome Simpson as the lone receiver to the left. 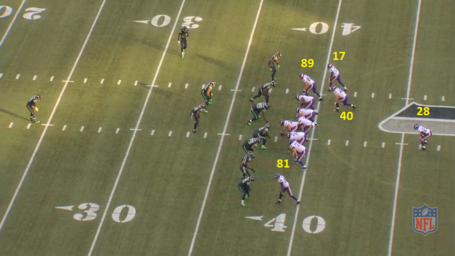 The play begins with Ellison coming in motion into the backfield, balancing things out somewhat and attempting to sell the likelihood of a run on first down. 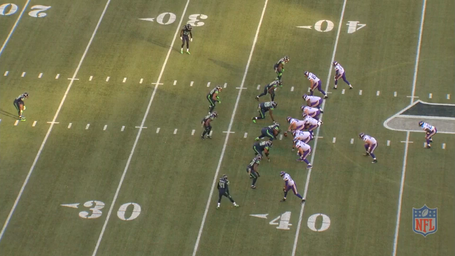 Ponder takes the snap and executes a pretty decent fake to Adrian Peterson in the backfield. You can see Simpson and Wright beginning to run their routes, while Ellison has started to head for the right flat. Carlson stays in to block, as does Peterson following the fake. 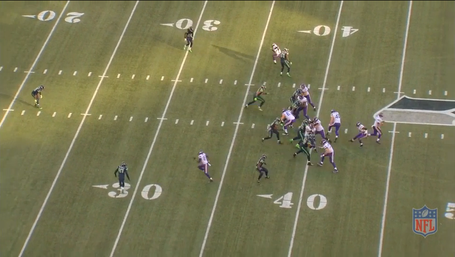 Now, once Ponder completes his drop, Simpson has started to run a crossing route, while Wright appears to be angling his route towards the sideline. Ellison is pretty much bracketed by a couple of defenders, which frees up Wright to be one-on-one with Richard Sherman, one of the NFL's best cornerbacks. 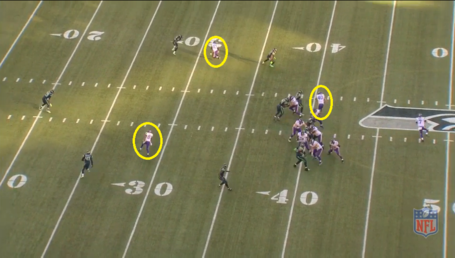 At this point, Wright notices Sherman overplaying the path to the sideline, puts his foot into the ground, and shifts his route upfield. Realizing this, Sherman pretty much just attempts to grab Wright, as he knows he's probably in trouble. 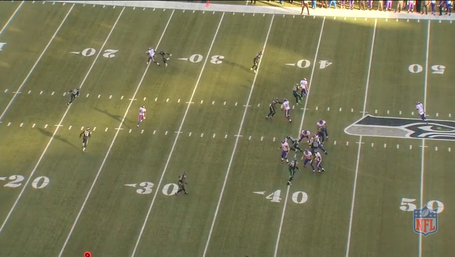 As you can see, Ponder still could have hit Simpson just beyond the sticks for a first down, but at this point he's noticed Wright coming open, substantially so by the time Ponder releases the ball, as you see here. 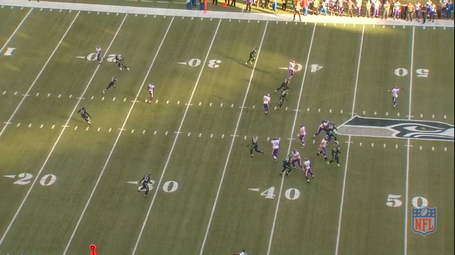 The pass, yes, was a bit underthrown by Ponder, but with as far as Wright had Sherman beaten by on the play, he was still plenty wide open by the time the ball got to him for the 38-yard touchdown catch, Wright's first of the year. 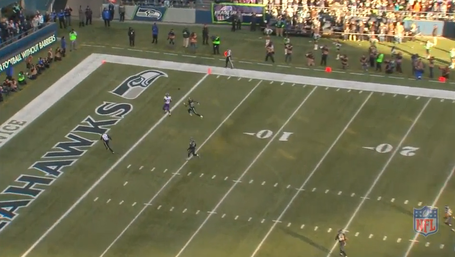 The key to this one, in my opinion, was the route Wright ran on the play. He got Sherman to think that he was trying to run more towards the sideline, or just potentially trying to clear things out for Simpson in the center of the field. However, he saw an opening and, whether it was by design or not, got past Sherman and behind the Seattle defense for the score. You don't see a guy like Sherman get beaten like that very often, and it was nice to see Jarius Wright get into the end zone.

That's our Precision Play of the Week, ladies and gentlemen.

Test how precise your football knowledge is by playing the Precision Play of The Week for a chance to win Super Bowl tickets – brought to you by Gillette Fusion ProGlide, precision comfort, even on sensitive skin.