The Vikings take a surprising 13-7 lead into halftime in Green Bay.

We have a bit of a defensive battle on our hands through two quarters at Lambeau Field. Or is it? I can't really tell... 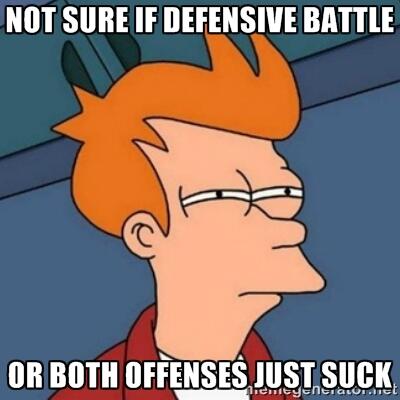 But either way there hasn't been a ton of scoring in the first half between the Minnesota Vikings and Green Bay Packers. The suspect Vikings defense has actually been pretty solid today, allowing only 167 total yards of offense by Green Bay. Rookie cornerback Xavier Rhodes had an amazing first half including a couple pass breakups.

Minnesota had a promising drive at the beginning of the second quarter stopped due to an Adrian Peterson fumble. The fumble was caused by A.J. Hawk, who got a good chunk of AP's facemask before the ball came loose but the referees missed the blatant penalty.

The Vikings later took a drive from their own 1 yard line and managed to get three more points thanks to a big grab from Jerome Simpson that took the team into Packers territory. Blair Walsh got Minnesota within 1 with a 47 yard field goal.

Green Bay made it into Minnesota territory before the half, but poor clock management by Scott Tolzien prevented the Packers getting any points. The Vikings are actually up by six points on their division rivals after 30 minutes!

It's worth noting that it hasn't been a memorable homecoming for former Packers WR Greg Jennings--he hasn't even been targeted yet today.

Follow along as the Vikings try to hold on for the upset as the second half gets underway in Green Bay.