Using the All-22 from the Green Bay Packers game, I decided to create a poster of every snap Greg Jennings took on passing plays that weren't predetermined reads or screens.

Share All sharing options for: Greg Jennings Is Always Open: A Photo Essay

That is perhaps a slight exaggeration on my part, but it seems like Jennings is always finding a way to create enough separation for a quarterback to get him the ball.

In order to test my intuition, I looked at every single passing play Greg Jennings took in Minnesota's most recent game against Green Bay, and then got rid of the screen passes and predetermined reads. Photo essay below.

A few quick notes: just because Jennings is open doesn't mean he's the best available receiver on a particular play. In some cases, I circled a receiver if he was far and away the best available option and also didn't happen to be the target on a passing play (that's in purple).

I also identified the scramble path Ponder took on one play, cleared up a couple of defensive looks with a few yellow circles and arrows, included two plays where there clearly needed to be two frames.

While some of these diagrammed plays could be construed to be implicit criticisms of Christian Ponder or Bill Musgrave, they really are mostly just designed to highlight Greg Jennings, who in the 28 plays I've highlighted was open an astonishing 26 times.

Green Bay was without its top two corners in the game, so take things with a grain of salt. But after seeing Ponder's presser after the first Green Bay game, I thought this was worth exploring.

So below is a compilation of diagrammed shots from the most recent game against Green Bay to help demonstrate how often Jennings was open. 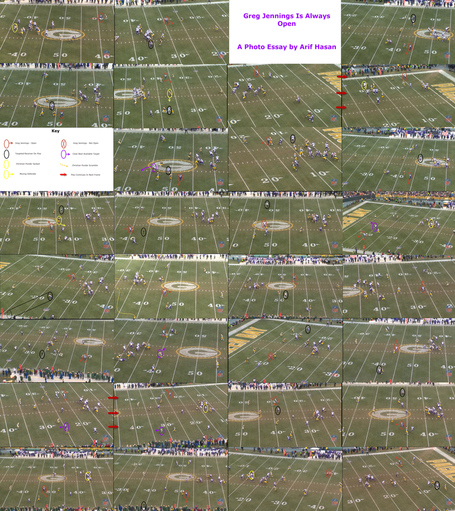 There's a play where there are two black ovals connected by two lines. The play took a long time to progress and Ponder threw it out of bounds quite a bit after the screenshot was taken.

Update: I wrote this in the comments, but I wanted to say this in the article proper. You all know I'm not the biggest fan of Christian Ponder (perhaps a large understatement), but I wanted to emphasize again that this really isn't meant to criticize Ponder so much as celebrate Jennings. The tools are there if you want to criticize Ponder, sure, but it's not like every throw that Ponder makes in this game is a bad one—many receivers are open on a lot of these plays, so there's no directive to throw to Jennings. Also, while I believe Ponder left a lot of plays on the field against Green Bay, he started off that game extremely well.