The Minnesota Vikings are still playing hard, but they still aren't going anywhere.

I know the headline sounds like it was something from The Onion Sports or Sports Pickle, but it's sadly true.

When you think about it, Sunday's game against the Cowboys was the best of both worlds for the two major camps of Vikings fans. On one hand, you have the #TankForTeddy, #MissionMariota, #SuckForTheDuck, and #JohhnyFootballGoesToMinnesota fans that know the season is already lost and don't want any pesky wins screwing up our 2014 draft position. They were satisfied because the Vikings lost again. On the other hand you have the fans that can't stand the team laying down and getting blown out every week. They were satisfied because the Vikings actually played pretty well against a division leader on the road.

I get that many Vikings fans that don't mind the losses since it could eventually lead to a better future for the team: better draft picks, new coaches, an overhaul of a largely inept roster. But you guys realize that we're only halfway through the season, right? Are you sure that you can endure eight more weeks of this crap? Because I certainly wouldn't mind a win or two sprinkled in with all the misery.

My wife and daughter took a nap this afternoon during the second half of the game. (Because they're obviously smarter than I am.) When they came back downstairs, my wife's first question was "How bad did the Vikings lose?" I started to explain how they almost won and lost in the last minute, but stopped myself and just said, "Only by four. So at least it was close." I don't know if I can put up with two more months of that.

But hey, at least there were some significant bright spots for the first time since the London game. Christian Ponder played his best game of the season. Of course "best" meant 25/37 for 236 yards (tied for his most completions and yards all year), a mediocre 82.7 quarterback rating, two total touchdowns, two crucial turnovers, and a hilariously under-thrown Checkdown Hail Mary on the last play...but it was better, you guys! His 67.5% completion percentage was the best of his career when throwing that many passes! And some of those completions were actually to Greg Jennings this week! (Jennings had a team-leading 6 receptions and 56 yards.)

Another bright spot: Adrian Peterson is still an unstoppable cyborg sent from outer space to crush everything in his path. The Vikings actually had the ball more than the Cowboys today and AP actually got his touches--those two facts are not unrelated. Peterson carried the ball 25 times for 140 yards and adding another 37 yards on 3 catches. And he scored this absolutely ridiculous touchdown to give the Vikings a late lead:

I could watch that all day (pun intended). I could also look at this picture all day, which captured AP's reaction to Blair Walsh's missed extra point after the touchdown (with bonus derp face from Toby Gerhart): 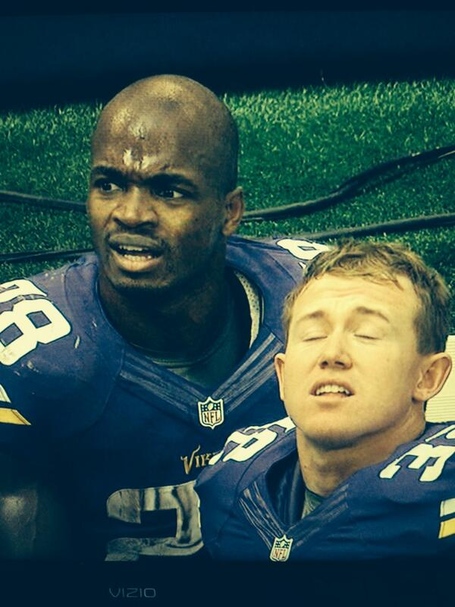 The Vikings defense also played better than expected. Dez Bryant was largely held in check by the Vikings secondary...and Dez Bryant. (Seriously, there's "passionate" and then there's "idiotic". Bryant has definitely crossed over into the latter.) The Cowboys were only 5 for 14 on 3rd down; the Vikings had come into the game as the worst third down defense in the league. The front four created lots of pressure, sacking Tony Romo three times and pressuring him pretty often without sending additional defenders. Chad Greenway tallied the 1,000th tackle of his career. And A.J. Jefferson got an interception. Yes, you read that correctly. It took almost half a season but a Vikings cornerback finally did one of the main things they're expected to do from time to time.

Of course this is still the Vikings defense we're talking about. For the third time this season they allowed a go-ahead, last-minute touchdown. As the old saying goes, the only thing the prevent defense does is prevent you from winning. The Vikings dialed it down to a 3-man rush for that last drive, which upset at least one Vikings player:

I'm glad the Vikings players are finally starting to be more vocal with questioning coaching decisions because Bill Musgrave and Alan Williams aren't doing their respective units any favors for the most part. I thought Musgrave had a few good calls today--for instance, the screen to Peterson to combat the right-side blitz from Dallas--but overall his "system" still isn't working with the personnel he has.

Then again the personnel the coaching staff has available is dwindling by the week. Phil Loadholt suffered a concussion and is already doubtful for Thursday's game. Kyle Rudolph hurt his left foot on the touchdown he scored, because nothing can ever just go right for the Vikings. If he can't go it will be John Carlson catching two-yard passes against Washington. Xavier Rhodes was banged up. Mistral Raymond and Erin Henderson played a significant amount of snaps, which is never a good thing. Bad and battered is not a winning combination and the Vikings are proving it.