Cassel will get the starting nod when the Vikings host the red-hot Eagles on Sunday.

The Vikings are making a quarterback change again!

But this time they're only swapping the backups on the depth chart.

With Christian Ponder cleared to play after suffering a concussion against the Bears in Week 13, he'll be back in the Vikings lineup on Sunday when the Vikings host the Philadelphia Eagles. However, he'll start the game on the sidelines.

Leslie Frazier officially named Matt Cassel the starting quarterback with Ponder as his backup. That means Josh Freeman is once again relegated to third-string status after a one-week stint as the #2 quarterback. As for Freeman, don't hold your breath if you want to see him play for the Vikings again this year. Frazier stated that there are no guarantees that Freeman will see the field these last three games, but he did say that he and the staff "want to see more" from both Cassel and Ponder. 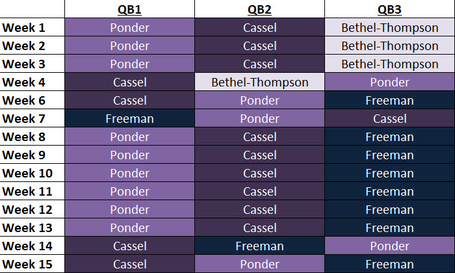 That has to be some sort of record. A very sad record, but a record nonetheless.

In other lineup news, it sounds like we'll have to wait until Friday until we know more about three crucial Vikings players. Harrison Smith is on track to return to the team on Sunday but he can't be officially activated until Friday since that's the first day he can officially come back from the "designated to return" IR. It sounds like the team is planning to start Smith but limit his snaps with a rotation of Jamarca Sanford and Andrew Sendejo. Frazier pointed out that the Eagles' high-paced offense isn't exactly ideal for easing someone back after a serious injury.

On the offensive side of the ball, neither Adrian Peterson or Toby Gerhart will attempt to practice until Friday due to their injuries. I'd still be very surprised if Peterson plays but it sounds like there's a good chance that Gerhart will be able to go if he doesn't suffer any setbacks. If both running backs have to sit out, expect Matt Asiata to get the start with recent practice squad signing Bradley Randle possibly getting a look.