Thank You For Another Great Year, Vikings Fans!

Share All sharing options for: Thank You For Another Great Year, Vikings Fans!

Well, in a little less than three hours (in God's country, anyway), the calendar will flip to 2014. Our eighth season of covering Minnesota Vikings football concluded a couple of days ago, and before you know it we'll be on to the announcement of a new head coach in Minnesota, the beginning of free agency, and the 2014 NFL Draft.

Just as we have every other year since our inception, we continued to excel and improve in pretty much every possible way. Unfortunately, we lost the Sitemeter that we had used for our traffic milestones a few months ago, but from what I can best discern from cobbling together data from there before it went away and Google Analytics, it appears that we went over the 6.5 million visit mark for the last 12-month period, and we now sit at around 16.5 million visits over the course of our existence.

With as rough a season as it was for the Minnesota Vikings in 2013, it's truly a testament to this community that things continued to improve at the rate they did. But we brought you even more than we've been able to bring you the past couple of years. We once again had folks at Winter Park for the National Football League Draft, despite Eric allowing something as minor as the birth of his first child to get in the way of his being able to go. Just kidding, Eric. . .how can we be angry about this? 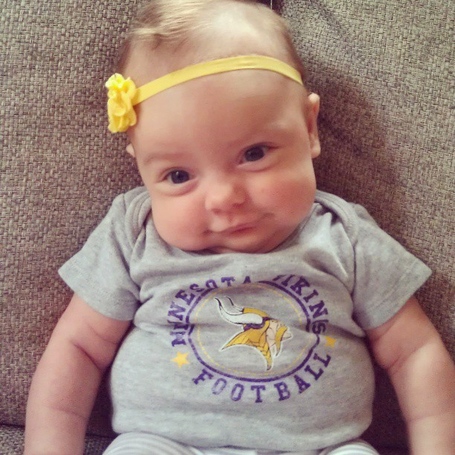 Seriously, I think I just felt my blood sugar spike, she's so sweet.

Not only that, but for the first time ever, we had full access to every single day of Minnesota Vikings' Training Camp, something that we hope will continue in the years going forward. And we had that access, in part, because this community came together and made it possible for Arif to stay in Mankato for the duration of camp when it appeared that he might have to take off early. No matter how long this community stays up and running with yours truly at the helm, I'm not sure if I'll ever be more proud of anything that's happened here than that. You folks thought so highly about this site and what it was providing for you that you gave of yourselves to make sure it continued. In the words of WWE crowds throughout the nation. . .

We're very much looking forward to providing even more coverage of the Vikings for you in 2014, as the team spends the first of its two seasons at TCF Bank Stadium, leading up to the opening of the greatest damn stadium ever for the start of the 2016 season.

We also crowned the man that you, our readers, crowned as the Greatest Viking of All Time. While the format of the tournament might not have been 100% perfect or anything like that, we had a pretty good time with it, and in the end it was hard to argue with the top choice. Alan Page defeated Bud Grant in the finals to take home the title.

The site also saw the start of a regular podcast for the site, as Arif and a cast of. . .well, a few at least. . .brought us Norse Code, which has the greatest title and best theme music of pretty much any podcast ever. I'd be willing to wager that it will get even more interesting as we get closer to this year's NFL Draft.

As always, I have to give a ton of thanks to everyone else that provides front page articles for The Daily Norseman. We've had some folks come and go over the years, but we've had a lot of the same core people for a while now. Since I first hit the internet solo with this site (under the SB Nation umbrella, of course) in July of 2006, I've managed to surround myself with a group of really great people. Thank you, from the very bottom of my heart, to Ted Glover, Eric Thompson, Skol Girl (who's doing a hell of a job with the DN Facebook page, which you ought to be following if you aren't already), Kyle Segall, Arif Hasan, Mark, and CCNorseman. Without them, this site really wouldn't go, and it certainly wouldn't be one of the more popular NFL sites on the SB Nation network.

And without you, this site damn sure wouldn't go, either. Whether you're a lurker, a commenter, a FanShotter or a FanPoster, you're a part of this community, and we appreciate you being a part of what's been put together here and helping to make us who we are. The Minnesota Vikings' franchise has noticed us because of you folks out there, wherever you might be. You've demanded top of the line coverage of our favorite football team, and I'd like to think that's exactly what we've provided.

Both on the field for the Minnesota Vikings and on this website, 2014 is going to be an even bigger and better year than 2013. If you're already a part of it, thank you very much for that. If you know Vikings' fans that are looking for even more coverage, make sure you tell them about us.

Once again, thank you for everything, and Happy New Year from all of us at The Daily Norseman.