I suppose it was overdue at this point. After six weeks of "consistency" at quarterback for the Minnesota Vikings, it appears that the depth chart will yet again be shuffled.

Leslie Frazier claimed that Matt Cassel will likely get the start against the Baltimore Ravens on Sunday since Christian Ponder has yet to be cleared to play. Ponder suffered a concussion in the first half of last week's overtime victory against the Chicago Bears. Cassel filled in for the remainder of the game. Frazier also said that Josh Freeman will probably be the backup in Baltimore. Freeman hasn't played since the Week 7 debacle against the Giants.

It probably doesn't matter who the Vikings have under center down the stretch, but it is worth noting that Cassel has been the quarterback at the end of all three Vikings victories this season. He did OK last week and probably gives the team the best chance to win at this point. Of course choosing the quarterback that gives Minnesota the best chance at winning is a lot like choosing between the last three kids that haven't been picked at gym class, but it's still a choice the team has to make.

The 2013 season has been a tumultuous one when it comes to QB. Just how crazy of a season has it been for the Vikings at quarterback? I created a quick visual representation of the team's QB depth chart from week to week this season: 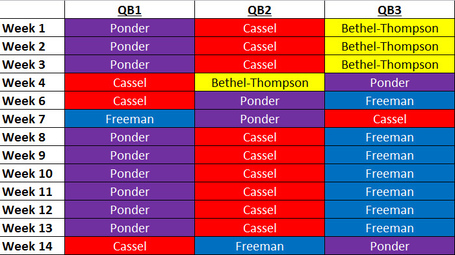 Just look at that. For the fifth time this season, the quarterback depth chart is different than it was the previous week. That's...ridiculous? Hilarious? Almost impressive? Incredibly sad? Maybe a little bit of all of those adjectives? Either way we'll probably have another change of scenery under center when the Vikings take the field on Sunday.