Week 14 Picks And Preview: Running Out Of Time

Daily Norseman checks the mileage on Ray Rice and Adrian Peterson before previewing the Vikings/Ravens game and making the Week 14 NFL picks.

Share All sharing options for: Week 14 Picks And Preview: Running Out Of Time

Adrian Peterson, who is 28 years old and wears jersey #28, was the 28th player in NFL history to reach 10,000 yards rushing. (How fitting!) AP was the third fastest to ten grand on the ground in NFL history, needing only 101 games to make it. When he passed the milestone last Sunday against the Bears, it was cause for admiration and celebration. It seems like only yesterday Peterson was setting the single-game rushing record in his rookie season; there's no reason to believe that he won't continue his meteoric rise up the all-time rushing list.

Or is there cause for concern? While Peterson is unlike any athlete we have ever seen, there's a common belief that once a running back gets to 10,000 yards his best years are already far behind him. The belief often goes hand in hand with the notion that you should basically put a running back out to pasture when he reaches the age of 30. Does that mean that we only have a couple precious years left of Adrian Peterson at this level?

Of the other 27 members in the 10K Club, 18 of them ran for at least one season and 1,000 additional yards after reaching 10,000. So I decided to do some research to see if "falling off" after reaching the big milestone is really true. Thanks to the handy feature on Pro Football Reference that lets you group statistics by year for a player, I was able to compile the following table. I split the data up between the seasons leading up to when the running back reached 10,000 and the seasons after they passed it.

(I apologize if you have to scroll a bit to see all the data. Unlike Arif and CCNorseman I'm still new to the worlds of "actual research" and "using statistics to prove a theory".)

As you can see, a sharp decline after reaching 10,000 yards isn't universal but it's definitely the norm. Of the 18 players listed (13 of which are Hall of Famers), there's an average drop of 25.4 yards per game after getting to 10K. The average drop in yards per carry might not seem monumental but it usually comes with less carries overall. These greats of the game were no longer trusted to carry the workload after they eclipsed 10,000 yards.

There were a couple freaks of nature that quit with a few good years left in the tank--namely, Barry Sanders and Jim Brown--that kept the average gap from being even larger. Walter Payton having only a slim decline isn't all that surprising, but I was pretty shocked that Curtis Martin actually got a little better after reaching 10,000. Other than those anomalies the decreased production was alarmingly consistent.

Another alarming trend was how few seasons were played after these greats passed the milestone. Almost everyone played three years or less and only Emmitt Smith and Payton played more than four. We all envision AP tromping through defenses for years and years to come; if that happens, he'll truly be an outlier.

If anyone is capable of smashing through these norms and rewriting the record books, it's Adrian Peterson. His combination of size, speed, agility, and quickness trumps anything of players that have come before him. But he has already blown out a knee and has been fighting fairly serious nagging injuries for most of this season. How much longer can All Day go all day?

(YES, RICK SPIELMAN, THAT QUESTION WAS DIRECTED AT YOU. GET THIS TEAM BACK ON TRACK SOON BECAUSE WE'RE CURRENTLY WASTING WHAT MIGHT BE THE LAST PART OF HIS PRIME.)

Of course most running backs aren't lucky enough to reach 10,000 yards before fizzling into oblivion. Could Ray Rice already be hitting the proverbial wall? He's almost two years younger than Peterson and has played 13 fewer games but his numbers have fallen off a cliff this season. (Cut to millions of unhappy fantasy owners yelling "NO S--T.") His yards per carry has dropped by a whopping 1.6 which has translated to 27.9 fewer yards per game than his career average. Rice is also averaging nearly 16 fewer yards receiving each week.

The raw numbers never tell the full story but they're raising all sorts of red flags when it comes to Rice. The Ravens have been going through a bit of a Super Bowl Hangover as a team this year; Rice is in a full-on Super Bowl Coma. (But hey, at least he isn't Trent Richardson!) Could Rice already be past his prime or is his lack of production simply a byproduct of an offense that is struggling overall?

THE RAVENS HAVE BEEN GOING THROUGH A BIT OF A SUPER BOWL HANGOVER AS A TEAM THIS YEAR; RICE IS IN A FULL-ON SUPER BOWL COMA. (BUT HEY, AT LEAST HE ISN'T TRENT RICHARDSON!)

I think we'll get a fairly decent answer to that question as Baltimore finishes their playoff push this year, starting with Sunday's game against the Vikings. Baltimore obviously needs Rice to be better if they hope to make the postseason; they might not need that much more of him this week.

While Minnesota's defense has finally stopped being such a pushover the past few weeks, you can still move the ball on them, especially through the air. Upgrading the linebacking corps by continuing to start Audie Cole and moving Erin Henderson back to weak side where he belongs can only go so far. Joe Flacco has passed for over 300 yards as many times as he has passed for under 200 yards this season (three a piece); I'd be surprised if he didn't put up numbers that reflect why he was paid a bajillion dollars in the offseason. Torrey Smith, Jacoby Jones, and Marlon Brown are bound to get behind the Vikings' thin secondary at least once or twice. Because after all, Chris Cook has made more contact with referees than with opponents' passes this year...

The other side of the ball is going to look different for both teams. Gone are the days of Ray Lewis gyrating and getting credit for tackles even though he's the third player on the pile. I mean, er, leading his team to victory. But make no mistake, this Ravens defense is still formidable. Pro Football Focus has Baltimore as their third best overall defense including third against the run and eighth in pass rush. New/old Minnesota starter Matt Cassel will struggle to move the ball even if he avoids making costly mistakes.

The Vikings have been playing too well lately to get blown out. Sure, the game is outdoors on the road against a team is historically tough to beat at home (Flacco is 38-8 at M&T Bank Stadium). I think the Vikings will make the Ravens work for it but I just can't see Minnesota extending their unbeaten streak to three games.

No matter what happens on Sunday, make sure to appreciate every amazing thing that #28 does. You never know how much of it is left.

And now for the rest of my Week 14 NFL picks (home teams in ALL CAPS):

Texans over JAGUARS: The Bridgewater Bowl! If I get this pick wrong Teddy can probably start looking for real estate in the greater Houston area.

Bills over BUCCANEERS: I literally flipped a coin for this one. Why waste any brain cells on this bucket of yuck?

BENGALS over Colts: I did think long and hard about this one. Are the Bengals good enough for the Colts to beat them? I'm serious--Indianapolis only seems to show up against the big teams and I can't decide if Cincinnati qualifies. Nahhhh.

Lions over EAGLES: It only took a half dozen games but we finally got to one that might be worth watching! I had Philly at first but then I realized two things: Detroit is coming off 3 days extra rest and Nick Foles' deal with the devil has to expire pretty soon.

Chiefs over REDSKINS: Don't worry, KC. I know you're on a tough 3-game losing streak. But as the Vikings can attest, Washington is the perfect slump buster.

STEELERS over Dolphins: It's no coincidence that the Steelers and the Cobra Kai share the same colors. SWEEP THE LEG, MIKE TOMLIN. SWEEP THE LEG.

BRONCOS over Titans: Denver won't be pressured by Tennessee, but they will be pressured by nearly every fantasy owner in America to rack up points. "C'MON, PEYTON!! ONLY 3 TDS AGAINST THE TITANS?! YOU WERE PROJECTED FOR 42 POINTS!!"

CARDINALS over Rams: I get the feeling that this game will end up in a 38-10 blowout. I just have no idea which team will be on each end of it.

CHARGERS over Giants: Finally, Philip Rivers can conquer Eli Manning with a win this week and say that he has had a definitively better career. OK maybe not. What Rivers can say is that San Diego has a good crop of cheerleaders, and that's why they're our Gratuitous Picture of the Week: 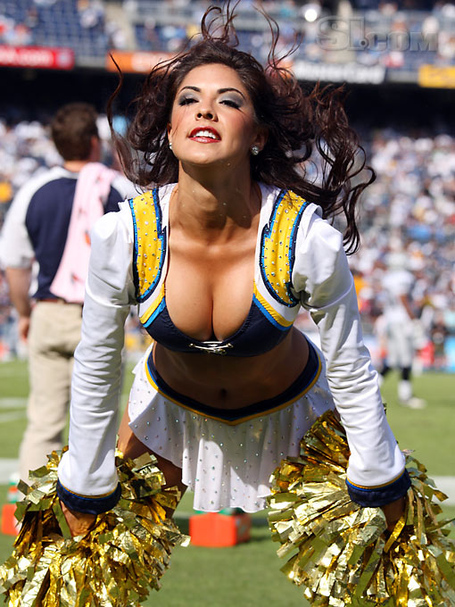 49ERS over Seahawks: Yes, Seattle is the better team. But this game means almost nothing to Seattle--even if they lose they're still 2 games clear of anyone catching them for home field advantage. I think San Francisco gets an emotional victory that only makes the Seahawks more motivated to crush everyone in the playoffs.

SAINTS over Panthers: I really want to like Cam Newton. Maybe a loss this week will make him enjoy the smell of his own farts just a little bit less so I can actually enjoy his amazing play on the field more.

Cowboys over BEARS: Just because I'm still pissed at Josh McCown for throwing to Alshon Jeffery for 249 yards last week instead of Brandon Marshall. (Guess who I have on my fantasy team and guess who I played against.)