With the recent rash of scandals in the world of sports, is it getting harder to root for your favorite teams and players?

This was supposed to be a simple Super Bowl preview. After all, the Big Game is only two days away. It's the greatest spectacle in American sport: a clash of elite, athletic, larger-than-life gladiators who are the very best at their craft. An unofficial national holiday that ranks second only to Thanksgiving in the volume of food consumed. An epic event so wondrous that you simply must have the latest and greatest television to watch it on.

There's no doubt that professional football is king in the American sports and pop culture landscape. It doesn't look like that will change anytime soon, player safety be damned. We eat, drink, and breathe football in this country. Come 5:30 CT on Sunday, we'll all be glued to our TV sets, even if it's "just for the commercials". The Super Bowl is always a ratings juggernaut and the intriguing matchup between the Baltimore Ravens and San Francisco 49ers will be no different.

But unfortunately we can't just talk about the game these days. While football reigns supreme, the NFL and sports as a whole has proven anything but infallible in recent years. Just look at the scandals that have popped up in the past few weeks:

Scandals like these are so commonplace in the 24/7 news cycle that we barely bat a lash at most of the stories these days. They aren't reserved for the upper echelon of athletes or big markets either. Just take a look at our very own Minnesota Vikings. We had the infamous Love Boat escapade, which is still the most productive thing Fred Smoot ever did in Minnesota. We had Brett Favre's infamous Dong Gate with Jenn Sterger during his last year with the Vikings. And speaking of Ye Olde Gunslinger, he was at the center of the New Orleans Saints bounty program, one of the few pro sports scandals that actually happened on the field.

Charles Barkley had the famous "I am not a role model" commercial way back in 1993. At the time, I remember Barkley's viewpoint was really controversial. Critics wondered how could someone in the public eye shrug off their social responsibility like that. But now? It's more or less a fact. The commercial was prophetic: if you idolize and look up to professional athletes, it's at your own risk.

The days of blind hero worship at the altar of professional sports are long gone. And you know what? We're probably all better for it in the long run. Sure, it was nice growing up with what I thought were real-life super heroes. But this is still real life, and even our favorite athletes still make real life mistakes. The sooner we realize that professional athletes are there mostly for entertainment instead of emulation, the better.

Which is why football and other professional sports continue to thrive amid so many negative stories--because they're still entertaining as hell to watch. You might not appreciate what a lot of these guys do in their personal lives, but they can still do things that most people on the planet can only dream of. And as long as the NFL and other pro leagues keep on trotting out an entertaining product, we'll keep consuming it regardless of how many bad things we know about the participants.

So here's my pick for Super Bowl XLVII--entertainment at its absolute finest. No more, no less.

49ers 31, Ravens 27: Let me preface this pick with a "your guess is as good as mine here". I really have no clue what will happen Sunday, which is what makes this one of the most exciting matchups in recent Super Bowl history. Colin Kaepernick is incredible, but he's going against an inspired defense that just held Peyton Manning and Tom Brady to six scoring drives combined. San Francisco's defense is one of the best in the league, but they had trouble against the deep pass against Atlanta and Joe Flacco has emerged as the best deep ball passer in the league. Aldon Smith was one of the best pass rushers in the league this year, but he hasn't done squat since Justin Smith suffered a triceps injury. Ray Rice is incredibly versatile, but he has been outshone by Bernard Pierce and the Niners have the best linebacking corps in the NFL. Both teams had very highly rated special teams units, but Baltimore allowed two kick return touchdowns in Denver and San Francisco still has David Akers kicking field goals.

For nearly every case you make about one team, you can make an equally valid counterpoint about the other team. But I'm picking San Francisco because I think they have a major advantage in one area: offensive line. They have been the unsung heroes of the 49ers' resurgent offense. Offensive coordinator Greg Roman can call all the Pistol formations and Zone Reads that he wants, but without an elite O-line Kaepernick and Frank Gore aren't going anywhere. I think that San Francisco's big uglies will get enough push for their offense to move the ball up and down the field and break through Baltimore's very tough red zone defense. They'll make former Vikings Matt Birk and Bryant McKinnie pedestrian by comparison and finally get Randy Moss his Super Bowl ring. Straight legacy, homey.

And with that, I leave you with the final Gratuitous Picture of the Week of the 2012 season. Enjoy! 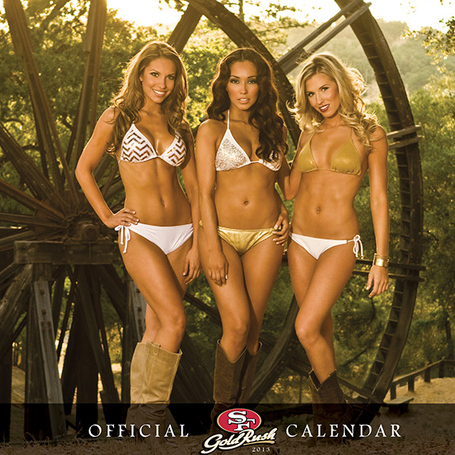 "In these outfits we look just darlin', let's go Niners down in N'awlins!" (image via prod.static.49ers.clubs.nfl.com)

P.S.: Best of luck to Cris Carter as they make the Hall of Fame announcements tomorrow. He has been deserving of the honor since the first day he was eligible. Hopefully he finally makes it in and ends the ridiculously dumb logjam they have at wide receiver.