As gratifying as it was seeing Cris Carter finally elected into the Hall of Fame, there is still unfinished business between the Hall and two former Vikings players.

Share All sharing options for: Mick Tingelhoff and Jim Marshall Should Be In The Hall of Fame

Kind of lost in the excitement of this weekend and the good news that it contained for the Vikings, there are still a couple of players who we need to keep pounding the drums about until the Hall of Fame acts and enshrines them. 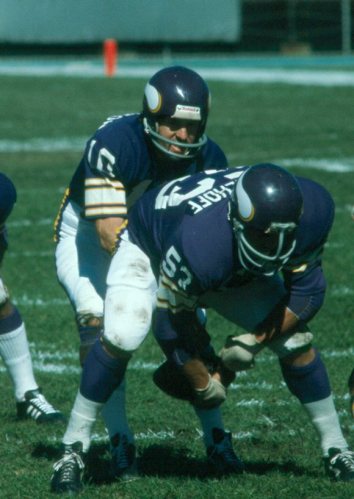 Mick Tingelhoff and Jim Marshall, two standouts from the days of the Purple People Eaters, have resumes as good as any of their contemporaries who have a bust in Canton, yet they have yet to receiver the call. A few years back, Peter King ran into Tingelhoff during Vikings training camp in 2005, and listed his accomplishments as well as anyone could:

I don't know what to say when we shake hands. He is 65 now, hearty and friendly.

I tell him I'm going to write to Rick Gosselin, a respected member of the Seniors Committee, before the Aug. 22 Seniors meeting in Canton, held to pick the two senior candidates for next year. I tell him I will try my best.

Tingelhoff entered the NFL as a free-agent center from Nebraska in 1962. He was the starting center by the third week of training camp. He started the first preseason gme, the first regular-season game, and then every single pre-, regular- and post-season game in Vikings history for the next 17 years. He made more all-pro teams than any center of all time, including the two centers from his era, Jim Langer and Jim Otto, who are in the Hall.

I am befuddled. He snapped for punts and kicks for 17 years. He played through six finger dislocations, a fully torn calf muscle, a separated shoulder --and, remarkably, no broken leg or arm bones and no torn knee ligaments. That he knows of, anyway. There were FULL SEASONS when he did not miss a single play. the Vikings went to four Super Bowls with him anchoring the offensive line.

How can you look at that list of accomplishments and say, 'nope, not a Hall of Famer'?

Let's look at Jim Marshall. As much of an ironman that Tingelhoff was, Marshall was even more durable. He came to the Vikings from the Cleveland Browns in 1961, and played in every game the Vikings ever played as a franchise until he retired in 1979. He was the end opposite Carl Eller, and was a key component in one of the most dominating defenses in NFL history. His resume, courtesy of the the Vikings Ring Of Honor page:

Ranks 1st in NFL history with 282 consecutive games played and started, 270 of those coming with the Vikings...Ranks 2nd in Vikings history with 127 sacks...Played in 2 Pro Bowls, following the 1968 and ‘69 seasons...Led or tied for team lead in sacks in each of the Vikings first 6 seasons (1961-66)...Holds NFL and Vikings record with 29 career fumble recoveries..Ranks 9th in Vikings history with 988 career tackles, ranking behind only Alan Page among defensive linemen...Joined fellow linemen Carl Eller, Gary Larsen and Alan Page to form the vaunted Purple People Eaters, one of the top defensive units of their era in the NFL...Started at DE in 4 Super Bowls (IV, VIII, IX, XI)....

The only thing that's keeping these guys out of Canton is the fact that as good as those Purple People Eater teams were, they never won a Super Bowl. And quite frankly, both the offensive and defensive lines for the Vikings were dominated in every one. And for Marshall, many people remember his 'wrong way run' against San Francisco, which was a fumble recovery for a safety, as opposed to a touchdown.

Think about it--if the Vikings win two or three of those Super Bowls, Tingelhoff and Marshall would've been in years ago. If you doubt me, look at all the Pittsburgh Steelers from the days of the Steel Curtain that are there. I would argue that had Pittsburgh gone 0-4 in those games, how many of those Steelers would not have been elected?

And if you look at Joe Namath's stats, you could make the argument that he went into Canton based on one game, Super Bowl III. And I think it's ridiculous that not winning a Super Bowl counts as a mark against a guy who played what is the ultimate team game. Voters are supposed to look at that individual career, not how they played in four games.

Look, this post is not meant to denigrate or bring down the men who have been elected and currently sit in Canton, because those guys are deserving.

But so are Jim Marshall and Mick Tingelhoff, and it's long past time to get these men to Canton, where they both belong.