After letting the initial rush of free agency settle down a little bit, the Minnesota Vikings finally made a move at the wide receiver position on Friday, signing Greg Jennings.

EDIT: Some of the details on Jennings' contract have come out. You can see them here.

(That promo headline and the headline that you saw on Twitter was all Ted, by the way. Have to give him credit for that one.)

Well, ladies and gentlemen, there's white smoke coming from Winter Park. And since Percy Harvin is in Seattle and I think Jerome Simpson is out of town, that can only really mean one thing.

We have a new receiver.

On Friday, the Minnesota Vikings agreed to terms with former Green Bay Packers receiver Greg Jennings on a contract. The move will bring him to Minnesota to (presumably) be the top outside receiving target for quarterback Christian Ponder in the Vikings' offense.

Maybe letting the initial wave of free agency settle down wasn't such a crazy idea after all. 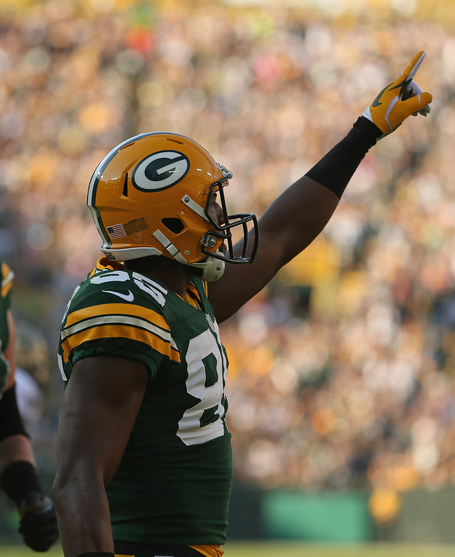 Jennings is a slightly older wide receiver, as he'll turn 30 this September, but after the departure of Percy Harvin, he will give the Vikings something that they're in desperate need of. . .a steady presence at the wide receiver position. While he doesn't fit the mold of a classic "big" receiver, Jennings had success lining up at many different spots for the Packers, and could prove to be a big asset to what is sure to be a very, very young Vikings' receiving corps.

Even with the signing of Jennings, the Vikings will need a couple more bodies at wide receiver to make things feasible in the passing game. As of now, the Vikings receivers are Jennings, Jerome Simpson (who went on KFAN and guaranteed a 1,000-yard season in 2013. . .we'll see), Jarius Wright, Stephen Burton, and practice squad holdover Chris Summers. With six selections in the first 117 to 120 picks (or so) in the 2013 NFL Draft and a very deep pool of talent at the wide receiver position available, it wouldn't be surprising to see the Vikings draft several players at the position. They could even bring in a couple of "bargain" free agents once things settle down even further.

The big issue with Jennings is going to be his health. After playing in 16 games every year from 2008 to 2010, he played in 13 games in 2011, and just eight games last season due to various injuries. If he can stay healthy, I don't think there's any doubt that he's the best receiver to put on the purple since Sidney Rice left town. . .and considering Rice hasn't done a whole lot since leaving Minnesota (and only had one really outstanding season when he was here), we might have to go back even further than that.

(No, I don't want to invoke the name that most of you are probably thinking of. Two totally different receivers.)

So, it appears the Vikings have at least made a start towards filling the gaping hole at the wide receiver position. There's still plenty of work left to do, but considering that there's still six weeks until the 2013 NFL Draft and much, much longer than that until the kickoff of the 2013 regular season, at least they've taken that first step.

What's your reaction to the Minnesota Vikings signing Greg Jennings, everyone?

EDIT: For those of you that are just stopping by, you can follow us on Twitter or like us on FaceBook to get more important Vikings news just like this. Just hit the links at the Social Bar at the top of the page.

Be sure to check out all of the Vikings' free agency happenings in our Free Agency StoryStream.