April 25 just became even more important for the Minnesota Vikings. They'll be displaying their new uniforms for the first time on the first day of the NFL draft.

UPDATE 3/28 5:20 PM: So I unlocked the first three clues that are available this week on the Vikings Uniform Insider page. (And holy crap did I have to do a lot of hashtagging to get there.) The first two are pictures that you can see posted below in the comments. The third was a video of Jared Allen's reaction to the new Vikings' helmets. Yes, you read that right, the Vikings are updating their helmets too. You can check my Twitter timeline for the full rundown of the 55 second video, but here are some of Allen's quotes: "Well done Vikings...I would say the helmet is a good mix of old and new...It's a lot tougher. It feels like you're playing a man's sport...We're gross but in the best way possible. This helmet is grossly awesome." He did start the video with "Hopefully not too much has changed, but just enough", so I'm thinking that the helmet is going to get subtle updates like the logo did. Feel free to speculate away!

UPDATE 2 3/29 9:50 AM: Here's the full video of Jared Allen's reaction to the new helmets. Thanks to Purpledork for putting it up on YouTube!

Hopefully the uniforms change more than the logo did, or else this story isn't going to be very newsworthy.

With the initial free agency flurry over, most fans are impatiently waiting for the next big day on the NFL calendar: April 25, the first day of the draft. Now Vikings fans will have even more to look forward to than the team's current eleven pending picks: new uniforms.

The Vikings have had the same basic look since the 2006 season kicked off. Here's a breakdown from the folks at the Gridiron Uniforms database: 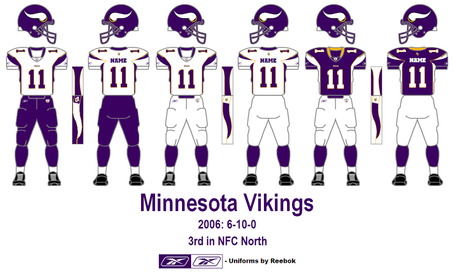 The look wasn't exactly met with open arms when it first came out and the general fan opinion of the uniforms has been on the decline ever since. Most of us have spent the past few seasons waiting on when the next "throwback" game would be so the Vikings could sport the much nicer duds that Jared Allen is wearing on the cover photo.

It sounds like the Vikings have heard the complaints and are ditching their uniform set after just seven seasons. The team will unveil their uniforms during their official draft party on Thursday, April 25 to coincide with the beginning of the draft. The draft party will once again be held at Mall of America Field; all the details about the party are available on the Vikings site here.

Can't wait another four weeks to see the new uniforms? The Vikings have given us an opportunity to see behind-the-scenes "teasers" about the new unis, but you're going to have to work for it. According to the official press release, here's how it works:

Fans who want an interactive preview into the design process can participate in the "Vikings Uniform Insider" campaign that was launched today. By engaging with the team's official Twitter, Facebook and Instagram accounts, as well as other Vikings activities, fans have an opportunity to unlock 12 uniform teasers designed to add to the excitement of the April unveiling. Participants will receive via email an in-depth look at the new uniforms on Thursday, April 25.

If you don't want to jump through all the social media hoops, don't despair--I plan on doing so and I'll try to give you a blow-by-blow account of the interesting things I find in the coming weeks. (Hopefully the team actually gives interesting tidbits and they aren't using this as an excuse to spam the hell out of everyone that signs up.)

April 25 is turning out to be a pretty exciting day. We get to see who the newest Vikings will be, we get to see what they'll be wearing in 2013, and...hmm, I thought there was something else that day...

...Oh yeah! It's also the due date for my first child. I guess that's pretty cool too.